Hi, I’ve got just two things left that are keeping me dual booting with Windows, Fortnite and VR gaming. Hopefully with the Steam Deck the Fortnite will sort that out soon leaving just the VR gaming.

Last night I got excited when I that ALVR appeared to have NVENC capability added just a couple of days ago, but managed to trash my system trying to install ALVR-git from the AUR (thought I’m uncertain whether that would have the new update compiled with it). It was completely my own fault for ignoring FFMPEG dependencies warning that came up (I had a Linus Tech Tips moment!), though I was able to rescue my system with a Timeshift backup I’d done a couple of days ago.

Is there anyone out there that has been able to install ALVR successfully that would be willing to walk me through the install? I feel very out of my depth with this but am very eager to learn and understand.

Any help would be really appreciated! 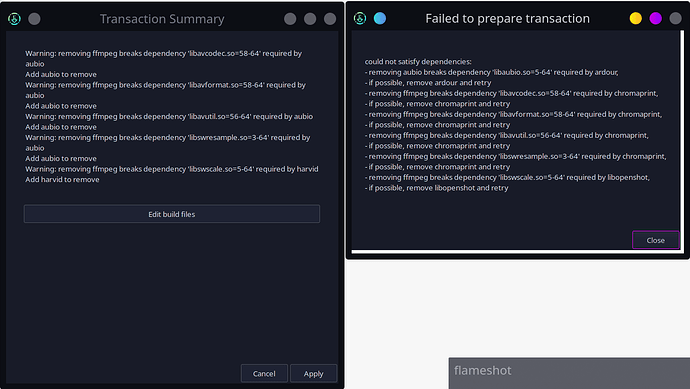 I did start to go down the path of removing Ardour and chromaprint, but just ended up with more warnings after, so it seemed like a rabbit hole full of incompatibilities.

The ffmpeg-vulkan package is badly written as it pulls the latest build automatically - currently it’s pulling FFMPEG 5.0 where the rest of the repos are built against FFMPEG 4.4.1. If you download the PKGBUILD and explicitly set the pkgver you should be able to get it built and installed.

However, you still might struggle - I haven’t had much success with ALVR under Linux.

Thanks jonathon, that makes sense as to why it is trying to remove FFMPEG, it’s to install the newer version which other software isn’t compiled to work with yet. Thanks for the tip, I’ll probably do another Timeshift backup before trying it with a different pkgver in case I break things again :-).

I had some luck with this a few weeks ago on Manjaro after removing some of the mentioned software but I’m convinced I broke quite a few apps in the process.

It did seem to work but with terrible frame rate, like it was having trouble drawing the frames. I just assumed this would have been a lack of NVENC capability at the time, but I could be wrong, it could simply be an optimization issue. I’ll be honest, I’m struggling to determine if compiling the alvr-git would include the newest changes, or whether or not I should be going for a nightly build.

Have you tried it with the new NVENC capability or are you using AMD?

I’ve tried both, though not very recently. In both cases the best result was with using USB (ADB port forwarding) but it still ended up with very jittery head tracking that made it unusable.

I’ve managed to get the latest client built ok from the master. Seems like my best bet was to remove ffmpeg without a check for dependencies. pacman -Rdd ffmpeg
then rustup install stable as somehow I’d deleted my default toolchain (no idea what happened there!). In a nutshell I’m on v17 for the server now, so I need to compile the lasted apk code as well for the client. This one seems a little trickier given I can’t even find the source code lol. Seeking help on the ALVR Discord as well