Anyone else have problem with too large icons, dock, borders etc in Plasma? I made fresh install and everything is too big, but I also installed Cinnamon and XFCE later and when I login there, no problems…
Anyone have idea where problem is?
I’m newbie, so if you need some specific information, please reply and post what should I post here…

KDE has options for scaling. Have you already tried making adjustments? What is your current screen resolution set to? It should be in your display settings.

KDE can be a little on the quirky side of life. You just gotta keep playing around until you get the right combination of things for you.

Yes, I already tried it, and just to answer you from other topic

I know that probably problem is with new hardver, but i wrote that on old laptop everything works great, so that I eliminate posibilty that my iso is broken…
I managed to fix problem at the and…
It seems that same theme that work on old laptop on smaller resolution, don’t work on new one with bigger resolution…
My resoluition is 1920x1080, that’s why it’s odd for me, I would understand that it looks big on smaller resolution, or maybe “too small” on larger haha

So now I changed in compositor to OpenGL 3.1 and scaling to smooth, and found WhiteSur theme that have multiple options for window decoration and when I put there to 1.5x it looks much better…

I’m not completely satisfied, because I would love to make whole system titlebar and border smaller, but it’s much better now, so probably some fix later will fix this

HiDPI ? can you post the short URLs these two commands give out from the terminal?

Also can you help me how to remove xfce from my system?
when i type sudo pacman -R xfce4, I get this error:
failed to prepare transaction (could not satisfy dependencies)
:: removing xfconf breaks dependency ‘xfconf’ required by libxfce4ui

I managed to remove cinnamon, I don’t think I would switch to other DE on my daily basis, so I want to remove all those packages that I get when I installed xfce

What if you do the configuration from nvidia-settings gui? 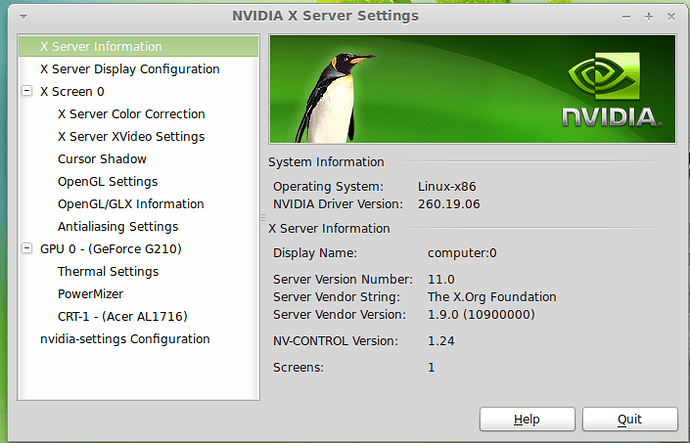 Yes, and drivers are installed, In nvidia x server settings I don’t see any option that i can change for fix this(for example resolution is correct)