Printer Brother HL-L2350DW may not be connected

That’s the message I get when I try to print. I tried setting up a printer via the GUI at EOS installation and got the message Printer Brother_HL-L2369L may not be connected. I did some searching and discovered Brother only provides driver packages deb and rpm. Did some more searching and someone used a program called paru to install so I installed paru and tried adding a printer that way. It appeared to successfully add the Brother printer but I get the same result when I try to print. Someone recommended creating a ppd file but I got lost in that process. I couldn’t figure out how to create a ppd file from Brother’s website. Does anyone have any ideas? I do a number of Google searches before I bother you guys. I hope someone can help. I’ve got everything set up the way I want in EOS except for printing.

OOP. I meant to say Brother HL_L2350DW. That’s the printer I’m unable to get installed.

Did some more searching and someone used a program called paru to install so I installed paru and tried adding a printer that way. It appeared to successfully add the Brother printer but I get the same result when I try to print.

Providing generalities like this mean people have to guess or ask for clarification, and that’s not massively efficient. Instead, please provide the specific things that you tried (e.g. which package you installed from the AUR).

I didn’t install a package from AUR unless you mean whatever was installed by the GUI when I installed EOS. Same with paru. I specified Brother_HL-L2350DW and it found and installed a driver. Where it got it from or what the package is called I don’t know other than it’s called Brother_HL-L2350DW. Pardon my ineptitude. I’ve been using Linux for a few years (Mint) but I’m just now trying an Arch derivative. I’ve always been able to solve problems on my own or find a solution on the net before. It’s just recently that I’ve resorted to asking questions in forums and I’m not well acquainted with what is needed for people to help. I’ll tell you what I can. I’m running a Dell Inspiron 15" laptop, with the most recent version of EOS. I believe it’s 6.1 - with the i3 window manager. The printer I’m trying to install I mentioned before. And I don’t know what packages were installed other than they were done by the GUI and paru. Both of them only labeled the package as Brother_HL-L2350DW. I’d appreciate a little patience. I’m new at this forum format. I’ll certainly provide any info that would be helpful. The “Not connected?” Printer Brother_HL-L2350DW may not be connected message comes up in a dialog box at the upper right of the screen a few minutes after printing is attempted.

That goes both ways.

Where it got it from or what the package is called I don’t know other than it’s called Brother_HL-L2350DW.

This will be worth finding out - noone here can guess that.

I picked the closest driver I could find. Copied this from CUPS:
Driver: Brother HL-2250DN - CUPS+Gutenprint v5.3.4 (grayscale, 2-sided printing)
2350 was not listed. Is that the problem? If so, am I stuck and no driver exists? There are deb and rpm packages at the Brother website.

There are several driver packages in AUR:

After installation, there should be new drivers available for selection.

You might also find the answer I have given to the following problem helpful:

I had a similar problem with my Brother printer the other day (at least the way you describe it) and the solution that worked for me is described in the archwiki/CUPS/Troubleshooting article under ’ Unable to locate printer’ (https://wiki.archlinux.org/title/CUPS/Troubleshooting#Unable_to_locate_printer); in short: tinkering with the Avahi Host name resolution (https://wiki.archlinux.org/title/Avahi#Hostname_resolution). Don’t forget to restart your PC (or to restart the relevant systemd servic…

This model work driverless if connected over wifi.

The only thing you need to set up is a workaround to get local DNS-Resolution enabled as @TheRaOct mentioned already ;):

Edit the file /etc/nsswitch.conf and change the hosts line to include mdns_minimal [NOTFOUND=return] before resolve and dns: 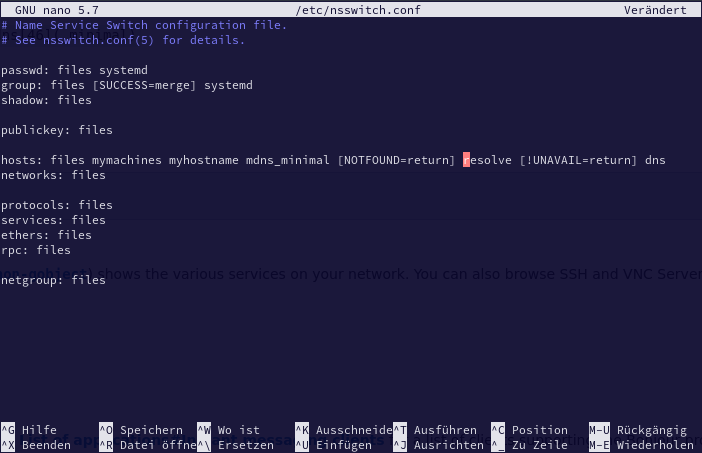 Restart avahi-daemon and NetworkManager after this, or reboot the machine:

If chosen to install brother-hll2350dw from the AUR you will be also able to use the printer by using URI as @anon68400099 mentioned before for the older model:

Need you to know the IP of your printer … over the IP you can also reach the webinterface of the printers PrintServer (on the printer itself) from a web-browser.

And for driver selection you need to find the driver named for Cups : 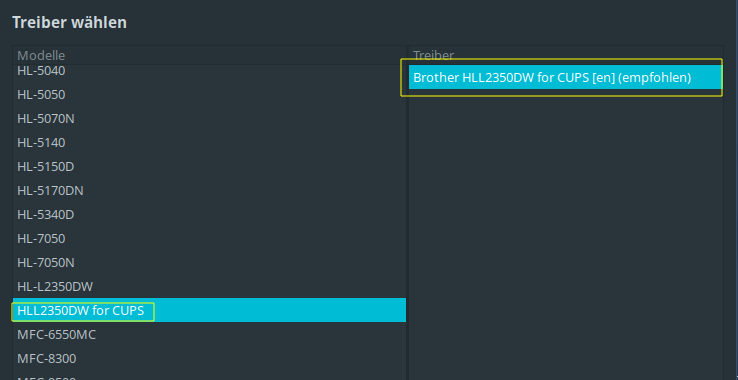 Others will not work. (as this is the one you installed before)

indicates also you may choose the wrong URI / protocol on adding your printer … and you do not say at all if your printer is connected via wifi or USB or network cable… nor do you specify exactly the way you add the printer… or if you removed non-working added queues ?
Also, the printer needs to be powered on to find it over the network, depending on how the printer is set up it will go in sleep mode after a period of time on its own also if this happens before you add the printer it can not be setup locally on the client.

AUR has this driver: brother-hll2350dw

EndeavourOS has no versions as it is basically Archlinux where updates are rolling released.

And as i do see users mention they are using version 6.1 of EndeavourOS i would like to know where this info comes from?

https://wiki.archlinux.org/title/Avahi#Hostname_resolution
The local DNS resoltion is not enabled per default. (for security reason)

I forgot to say “thanks”. How on earth someone knew to edit the /etc/nsswitch.conf file I’ll probably never know. Again, Thanks!

He knows cause he’s the doctor.

I found that out during the last printer colonic irrigation
🧑‍⚕️