There was a gnome-shell update recently within the past 2-3 days (along with a mutter update as well), and I didn’t notice it right away, but I believe I’ve come across an easily verifiable bug and would appreciate if anyone else that is on EndeavourOS Gnome to let me know if they have this bug as well. Please be fully up to date before checking since I believe it is a bug result from the recent gnome-shell.

To see the bug, open a window or two of any program (Terminal, System Monitor, Files, etc) and go into Overview Mode (windows key or click activities). You’ll see something normal like this: 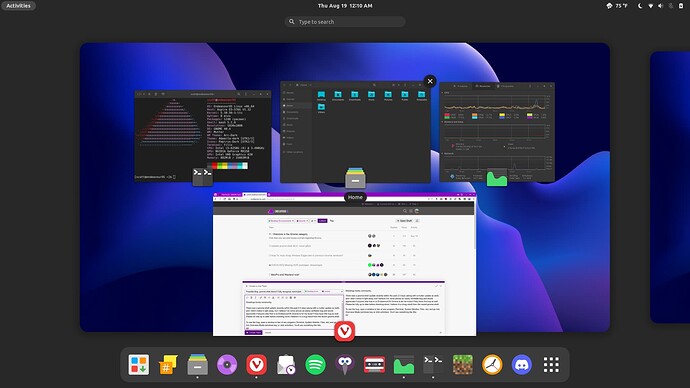 Notice when I hover over Files, I’m greeted by an “X” close button in the top right corner. 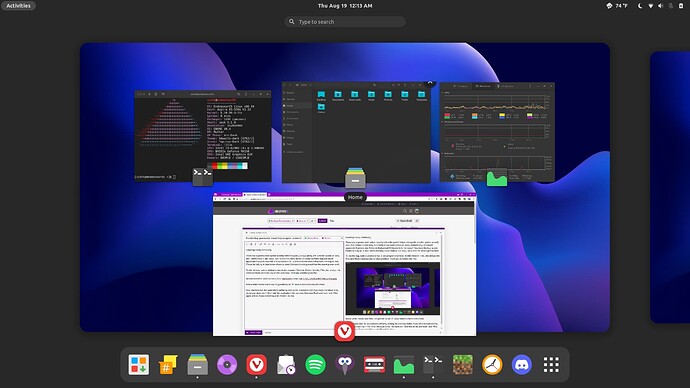 You’ll notice when an application is minimized and when in Overview Mode, the “X” close button in the top right corner gets cut off. This was not an issue a couple of days ago, hence why I suspect it was from the result of the recent gnome-shell update. This happens on the Adwaita theme, but also happens when I try the Arc and Yaru themes that I also have installed, so it is not theme specific, but more than likely related to gnome-shell.

I would appreciate if any fully up to date EndeavourOS Gnome (v40.4 btw) users here can just do this quick simple test for me and report back if they have the issue as well or if somehow it’s just me. If it’s not just me, then I’ll file a bug report on gnome-shell and hopefully they can revert and/or patch a fix for it. Appreciate any help, thank you very much for your time!

Thanks for posting about the issue and the steps on how to reproduce it!
On a fully updated EnOS-Gnome system, I can confirm that your observation is totally accurate. 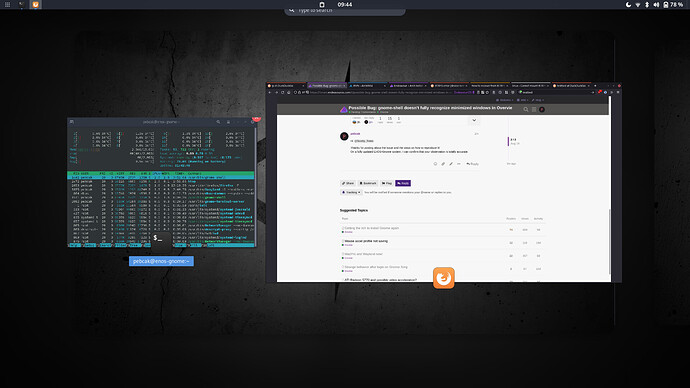 Very well, it pains me to see you suffer as well, but we shall hopefully be able to resolve this in a future update

I’ll post a bug report about it on gnome-shell’s gitlab page right now. Thank you very much for confirming the issue! I hope me pointing it out to you now doesn’t drive you mad

Edit: btw, @pebcak does this happen to you on Xorg, Wayland, or both I wonder? I have an nvidia optimus setup with gdm-prime so I can only use and test on Xorg, so I’m unable to see if this is also a Wayland issue or not.

No problem. Not madder than yesterday when I posted about Dash to Panel causing issue in another thread. Well … a bit madder perhaps

It is just frustrating that after you have set things up exactly how you like it a .x update comes along and breaks stuff.

does this happen to you on Xorg, Wayland, or both I wonder?

I can see this happening on both Wayland and Xorg.
It’s very kind of you to file that bug report. Let’s wait and hope that a fix will come!

Thankfully they are only minor bugs and not system breaking bugs. And I live to smash bugs, so this is an acceptable outcome so far. Hopefully the issue is recognized and verified and they can push an update soon, but sometimes these things do take a bit of time, so we’ll have to remain patient for now and try to ignore the Overview Mode as much as possible!

I’ve filed the bug report over here btw in case your curious: https://gitlab.gnome.org/GNOME/gnome-shell/-/issues/4561

so we’ll have to remain patient for now and try to ignore the Overview Mode as much as possible!

Patience not being my greatest virtue, I see some hard times ahead of me

I’ve filed the bug report over here btw in case your curious: https://gitlab.gnome.org/GNOME/gnome-shell/-/issues/4561

Great! And thanks again!

In the meantime: “Keep Calm and Gnome Matter What!”
#TheRealGnome

I just noticed there was a new gnome-desktop update that just hit this morning. I’m not able to test it out right this second (packing up and moving atm while blasting some music), but if you see the gnome-desktop update would you be able to update your system and test it out to confirm the bug is still there (reboot your system also after the update) or not? I don’t suspect it’ll fix the issue since it doesn’t depend on gnome-shell, but it could maybe work! Let me know if you can test it out or not, I can probably test it out myself in about an hour or two from now. @pebcak

I just performed the update. Besides gnome-desktop, I had updates to the zen kernel, Firefox and some other stuff. After the reboot and login, the issue is still present on my end.

Ok no worries, I had assumed it wouldn’t fix anything, but thanks for checking mate!

@pebcak one of the Gnome guys just confirmed it happens to them to so we’ll just have to be patient and see how things go, the sooner the better hopefully but it’s good they are aware of it now!

That’s good news! Thanks for following up on it and sharing the info! Let’s hope it get fixed rather sooner than later.

@pebcak Just a quick heads up, I got an email notification this morning saying the bug I filed was closed. Looks like the Gnome devs have implemented a fix for it, which is going through their QA process right now. Not sure how long that takes exactly, but I’d imagine we should have a fix deployed for it within a week if I had to guess.

The merge commit is located here if you’re curious to follow-up:

eee2ccac fixed window opacity being changed outside of transitions but resulted in the final step of the transition, that would set the window to fully opaque, being missed. This change...

That’s awesome! Thank you so much for sharing the news! I truly admire your willingness to take responsibility for it right from the outset and following through the whole process. Great spirit of community!

@pebcak It only took a little over a month, but a new gnome-shell update was pushed out today and finally fixes the bug that I reported back in August. Granted I didn’t do any of the work to fix it since I’m not a coder, but it feels nice to have helped out just a little bit in my own small way to make the Gnome desktop function as intended. All credit goes to the Gnome devs on this one of course.

All these windows below are minimized and now when hovering over the windows the “X” close button is no longer cut in half! Woo hoo!! 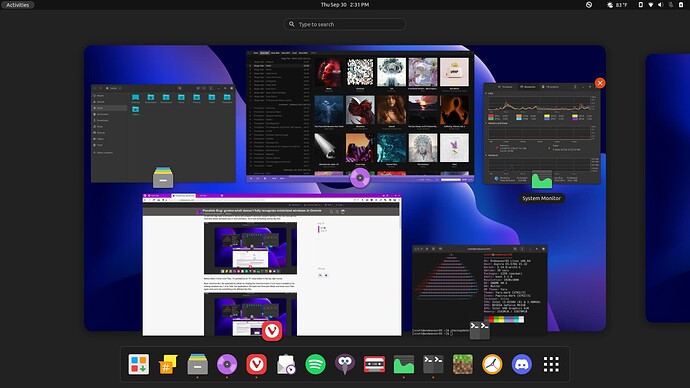 Thanks for the info on the update @Scotty_Trees !
Kind of you to follow up and through the whole process!

I haven’t been using my EnOS’ Gnome for the past few days. I have been quite busy to find my way around i3WM that I have now installed on all the systems around the house. Initially I thought I would spend some time each day with i3 but I realized that I would need to just jump in full-time for a few days to get enough exposure.

I am still quite far from being “well versed” in all things i3 but at least I have some of what you would call a workflow. Even though, all too often, it is not flowing without some friction

I haven’t been using my EnOS’ Gnome

Now I’m the only Gnome user in this entire user space! I’ve been abandoned! (cue There Will Be Blood memes)

Just kidding of course. I’ve used pop-shell before, but the whole tiling thing isn’t really my thing even though I admire it a lot. I use the mouse more that my cheap laptop keyboard anyways. If I had a proper desktop with a proper keyboard setup, I’d prob give i3 or dwm or awesomeWM a trial run, but Gnome has served me well so far so it looks like I will carry the Gnome torch by myself from now on. If you ever change your mind, you know what to install. Until then good luck in your i3wm endeavours