I just recently installed Endeavour OS (Atlantic Neo) on my laptop. I noticed that my audio didn’t work at all, and after maybe an hour and a half of browsing I installed rtkit, add my user to that group and started the service. After that didn’t work, I checked journalctl --user -u pipewire.service:

After a couple more minutes of working in the terminal I realized that pipewire.service was neither started nor enabled.

When I ran '$ sudo systemctl --user enable pipewire.service` it returned:

Failed to connect to bus: No medium found

When I ran $ sudo systemctl --user start pipewire.service it produced:

Failed to connect to bus: No medium found

While audio isn’t a necessity for me, I would prefer to have it working if I should need it.

Anyone know a fix for this? Thank you.

Edit: Forgot to include the hardware info command results

You should use wither sudo systemctl for system-wide services, or systemctl --user for user-only services. PipeWire is a user service, so use only e.g.

Prepending everything with sudo is a bad habit.

I tried this and it shows that it started. Then when I referred back to my journalctl it keeps spitting out the same as before (see screenshot), and I still have no audio output. 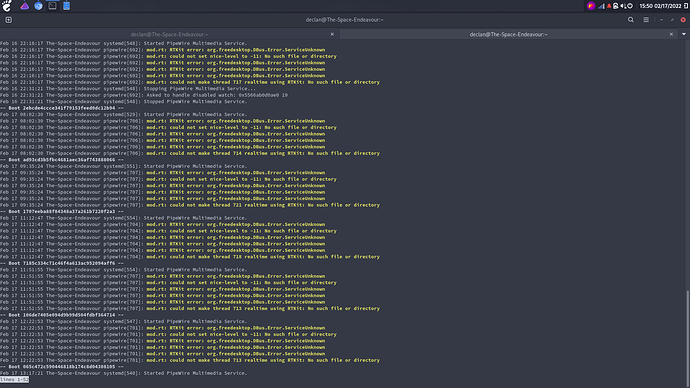 This is what it returned when I sent the systemctl --user status pipewire.service command if you think that it might say something there.

I’d go back and revert the changes you made here:

after maybe an hour and a half of browsing I installed rtkit, add my user to that group and started the service. After that didn’t work

to reduce the number of variables at play.

ok I did reverted all of that, and it now isn’t detecting built-in output but is rather putting it through ‘dummy output’ and there is still no sound.

OK, so going back to the beginning, did audio work within the live installer environment?

You’re likely to need the sof-firmware package installed, if you don’t already have it.

It worked in the live environment, and sof-firmware was already installed and up to date

I‘m using a chromebook I converted to real Linux if that changes anything.

Next thing would be to identify the packages that changed between it working and not working. Check /var/log/pacman.log or the output of paclog.

If it happened with a kernel update then it’s possibly a driver regression that will be fixed in the next kernel. You could also try different kernel packages (linux-lts, linux-zen) to see if that makes a difference.

(Also, forum tip, you can edit a post to append information rather than making multiple single-sentence posts)

I just got to work, but I‘ll try it when I get home in a couple hours. Thanks for your help. I‘ll post updates later.

It doesn’t seem like it worked, so I think I might just go without some audio output for the time being until there is a kernel update or something. I really like the distro and I enjoy using it so far, so if I need a video or anything I’ll use my phone or PC. Worse comes to worse I can do instructional videos with closed captions on. It seems like it might be this hardware though because the other distros I installed before this (Void, Artix, Archo) all seemed too have issues with this. Might just be my hardware with some proprietary crap or something but I don’t like touching the physical hardware if I can help it so it will probably just stay as is because I’d rather live with silence than no computer at all lol.

I do appreciate your time and help though. See you around bro.

(closing this because it seems like that it what is needed, I don’t know much about Forums and whether mods need to know or not sorry.)

FS#73802 : Updating linux-firmware; the sound is not working

Might be worth trying a downgrade of linux-firmware and see if that restores audio.

I’ll try it out thanks