At installation I am unable to connect to the internet(WIFI) and install EndeavourOS.

I do remember seeing that there are some incompatible WIFI adapters for linux but, I don’t know how to fix this issue. Please let me know, thanks in advance.

I do remember seeing that there are some incompatible WIFI adapters for linux but, I don’t know how to fix this issue. Please let me know, thanks in advance.

First: welcome to the forum!
Second: I do not have your wifi adapter so my answer is only theoretical
After googling “Arch Linux PCE-AC88” I found out that you have to do two different things to make it run:

I would install EOS with a different LAN or wifi and afterwards make your wifi adapter run.

I am unable to connect to the internet(WIFI)

Just to verify, which one is it? Can’t connect to wifi, or can’t access resources on the Internet?

This sounds like the issue I’ve had. Basically, the Broadcom adapter is supported by a couple of different drivers, most notably ‘b43’ which is a reverse-engineered driver, and ‘wl’ which was written by Broadcom. The ‘wl’ driver is the preferred one in most cases and its installation disables the automatic loading of the other one.

The wl driver is also loaded by the kernel on the installer disk but, personally, I’ve never gotten that one to work correctly. Fortunately, there are a couple of options:

At this point, you should be able to connect to the network normally.

@rell
It’s best to know exactly what chip the wifi adapter uses. If you could post the following output from:

I just checked the EOS-forum and I found following thread:

Maybe there is a solution for you.

I have access to LAN where I have installed the b43-firmware through yay but I do not know how to activate it or if it activates on its own. I know my WIFI adapter is not on because the blue signal light in the back is not blinking/on

my issue was that I could not connect to WIFI since I did not have the correct driver installed for installation. I have since installed EOS through LAN and am trying to figure out how to activate the B43-firmware I have just installed onto my sys through yay

It shows it’s a broadcom but module isn’t loaded. It should be using the kernel module. Uninstall broadcom-wl and or broadcom-wl-dkms if these are installed and reboot.

ok I will try this, after how should I connect to the wifi network? when I try typing wifi-menu nothing comes up.

If the wifi is working you should be to click on the network icon and see your wifi and connect to it.

Edit: Not sure what desktop you have. On Kde i have to enable wifi first as i have it disabled. 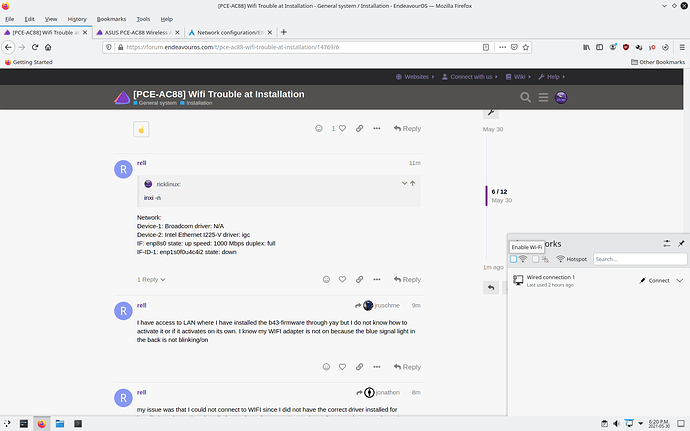 It worked thanks alot!

Thank you all for the help try a combination of your solutions helped me solve the issue!

Please credit the post that helped you the most by marking that as the solution, you can undo the title edit after that.

For any user that stumbles upon this with the same issue here is a working solution:

1.) First thing that I did is directly link to my router via LAN cable to have a connection and followed the normal installation.

2.) after installing and being in the main boot I installed the AUR helper yay and did the command sudo yay -S b43-firmware

3.) I somewhat followed @marteng69 solution to identify what type of broadcom driver I had. To find this I use the following command

which returned the following output for me.
I went back and got the output after the problem was resolved so the bottom two: kernel driver and kernel modules may look different to you

This allowed me to identify that I had a [14e4:43c3] device which tells me I need the brcmfmac driver
https://wireless.wiki.kernel.org/en/users/drivers/brcm80211

3.) After installing the firmware and knowing which driver I needed
I then initialized my driver by using the following commands found in the post linked by @marteng69 ASUS PCE Wireless Not working and as suggested by @jruschme

It shows it’s a broadcom but module isn’t loaded. It should be using the kernel module. Uninstall broadcom-wl and or broadcom-wl-dkms if these are installed and reboot

After rebooting I was able to see local WiFi networks in the top right where the connection tab is located and my issue was resolved.

The actual end-result solution was listed in the other thread that was linked:

Archwiki say: brcm80211 The kernel contains two built-in open-source drivers: brcmfmac for native FullMAC and brcmsmac for mac80211-based SoftMAC. so if in your case brcmfmac is the one working good you can remove broadcom-wl also sudo pacman -R broadcom-wl-dkms so wl driver is removed and will not interrupt anymore…

This why i always want to know what chip the wireless device is using so i can determine what module it’s supposed to be using.

Got it thanks, I updated the solution. Just glad everything is fixed.