Nvidia-installer-dkms -t does not find Nvidia 2080

i try to install an nvidia driver for my 2080.
The installer command gives me the following feedback:

nvidia-installer-dkms -t
EndeavourOS Nvidia Installer v2.1
All logs will be stored in /tmp/nvidia-installer.log
Running the installer in testing mode…
Couldn’t find a driver suitable for your graphics card.

An help is much appreciated

Maybe it is not listed in the database? What is the output of this command?

I don’t see any 20 series cards listed in the database on github. Maybe it can be installed just using nvidia-dkms with pacman? It looks like the same driver base version as my GTX1060. 440.xx

yeah as ricklinux noted, does this and mayby @joekamprad can help to add this card if its not listed , it seems to work with 440 driver

After running nvidia-installer-update-db again it worked and the card was found, the driver installed.
Thanks everyone for the support!

possible to force install also if you know your card is woeking with latest nvidia!

@joekamprad @AmokPaule I didn’t even realize that tool was there and able to update directly from Nvidia! I know my card also wasn’t in the list originally but got joe to add it. Maybe we need this info added to the wikki?

I didn’t know you could run nvidia-installer-update-db? Does the installer automatically run this first? 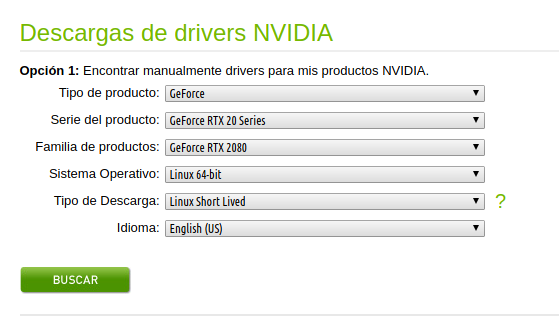 I have no experience with Nvidia, but I’m putting together something with a GTX 1650 WindForce … that’s how I practice a bit.

That’s it but with the short lived driver.

For some reason the nvidia-installer-dkms didn’t pick up the card when he ran the installer. So he ran nvidia-installer-update-db which i didn’t know about and i was just asking if this automatically runs before trying to install a driver? I ran it on my system to see what it did as i was curious. It connects to Nvidia and updates by the looks of it.

Nvidia is all good on my system.

That is currently a bit experimental program, but shouldn’t cause anything really bad.

So the commands that should (hopefully) help with new Nvidia cards are:

If the nvidia-installer-update-db does not produce a working database, then you can revert the dabase back by re-installing nvidia-installer-db package. But that simply puts you back to square one with Nvidia.

EDIT: I don’t have Nvidia 2080 card so I can’t test whether this works or not. But I guess there’s not much to lose with trying it…

I just wasn’t aware of the nvidia-installer-update-db command as joe originally added my card which is a GTX1060. So i tried the command now a couple of times and i see that it checks nvidia and i’m assuming it finds my card already exists. I have no issue with the installer and i assume it is the same using the online install process or not? I have install the whole system again a few times using the online installer and Nvidia. I only had an issue with Deepin once. Something wasn’t quite right and i was getting distortion at the very top of the screen. I think it was just an install issue because normally it works fine.