Hey guys, you maybe remember my problems installing the Nvidia driver on my AMD machine. Is that problem sorted out by now? I’m on Manjo by now, but not feeling good and wanna switch back to EOS. Rick, know anything?

What is your hardware again?

Yes, 470 is what I got from Manjaro. And I can just install it from the AUR? Without jumping thru hoops like last time when you had to save my sanity?

The real reason why I’m asking is that ever I was updated to Firefox 94, the internet lags sometimes, particularly YouTube often takes 2 - 3 minutes to open a new page or video. But weirdly only on my desktop machine. Hubby’s Manjaro lappy and my EOS lappy are working super smoothly.

But I Don’t know if a new install will help at all. Guess there is something wrong with the hardware. Maybe my AMD/Gigabyte setup doesn’t play nice with the new Firefox? 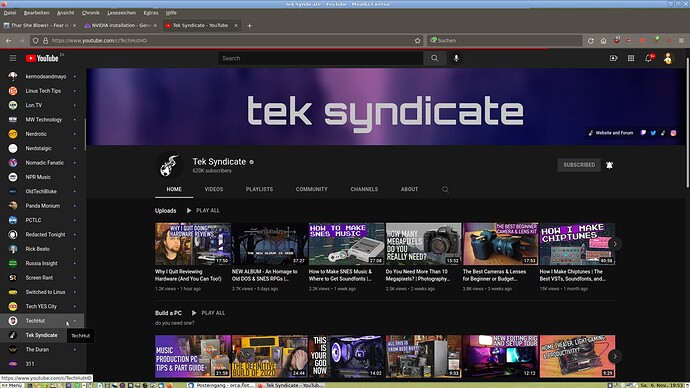 See the red progress bar up top? It’s stuck exactly at that position for 2 - 3 minutes. The same happens every time I switch to another YT channel.

It all worked fine until I installed FF94. It’s only on this machine, all our other machines (Lenovo, Acer, Clevo) are working perfectly.

I went on the same site with my Ryzen setup with AMD on KDE and Firefox 94. Pages load instantly.

Edit: Sorry i didn’t try switching to another channel and I’m not subscribed either so that might have something to do with it?

Edit2: No it loads instantly. No issues.

Edit2: No it loads instantly. No issues.

Interesting, very interesting. So there are now two options left to find out and remedy the situation: Swap Manjo for EOS again and/or fight with the Gigabyte workshop and getting abused and shouted at for using Linux at all. Guess I’ll try the re-install first.

BTW, people, whatever you do, don’t use Gigabyte mobos!

BTW, people, whatever you do, don’t use Gigabyte mobos!

And why would that be they all tell you the same they only support Windows,
That said my last 2 motherboards have been Gigabyte and they have out shined other previous boards and lasted longer, proves nothing apart from the old saying “a bad workman always blames his tools” or a little Knowledge goes a long way. Lol
On the other hand all boards are made to the same spec so we should blame AMD/ intel as they write the specs.

I never doubted that Gigabyte supports Linux, heard it the first time from that ahole chief tech at the Cape Town Gigabyte importer. He only checks stuff on Windows … and not even on installed software but just runs the diagnostics from a USB stick.

It all worked fine until I installed FF94

Introduction Almost 100% of the time, issues with Firefox are not issues with Firefox but issues with extensions or your configuration. This post sets out the basic steps to narrow down where the issue lies. Outline The usual steps for troubleshooting Firefox: Clear the browser cache Start in Safe Mode Start with a clean profile a) Start with fresh preferences b) Remove old security/key database files Before each of these, make sure Firefox is not running. Clear the browser cache If you c…

Thx for the hints, Jonathon but my problem wasn’t with FF94 as such but only with YouTube which acted weird and laggy. Now after reinstall everything seems to be fine. Only time will tell.