I tried to set nvidia-drm.modeset=1. I added a line to /etc/default/grub to write that line but I think it isn’t done.

I run cat /proc/cmdline and get:

I was following this to add it: https://bbs.archlinux.org/viewtopic.php?id=257509 based on it, cat command should show it but it doesn’t.

I use zen kernel with dkms nvidia drivers (proprietary).

Can we see the contents of your /etc/default/grub?

Also, you did, run sudo grub-mkconfig -o /boot/grub/grub.cfg and reboot after making the change, correct?

Just to add what @dalto mentioned, this is what I did, with some help from the EndeavourOS wiki also here:

To force nvidia-drm.modeset=1, by adding it to the grub.cfg run the following:

Inside the Grub config, you’ll add nvidia-drm.modeset=1 to the GRUB_CMDLINE_LINUX_DEFAULT line. You may have other options within the quotes " " there too, leave them there and just add the modeset part either in the beginning or the end.

save the file, ctrl+x, hit Y to save and rebuild the grub.cfg via the following command:

Ah, yes, another isue I forgot to mention:

The command you posted says this. As for the content of the file, here it is:

You added nvidia-drm.modeset=1 at the very bottom of your grub.cfg. Please delete that part and add it within the quotes of the line towards the top that is here in your file:

Save it and exit.Then rebuild your grub via the following, then reboot and you should be good to go:

Thank you so much!

I have one very last question.

It works, but I want to ask if this is enough if I wanted force Vsync through the GPU.

You should have an application already installed called nvidia-settings (if not sudo pacman -S nvidia-settings ), and when you open that to verify if synchronization is forced, check under the XServer tab and it should show that it is ON like mine does in the below screenshot: 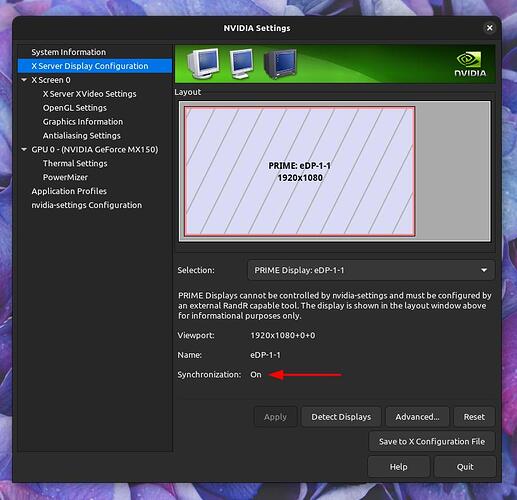 Edit: if you have only one display, this will be enough. IF you have more than one display, you may have to run an additional step, just FYI.

I’d rather want to create another post to not spam the forum, and I guess this is pretty short but my panel looks differently: 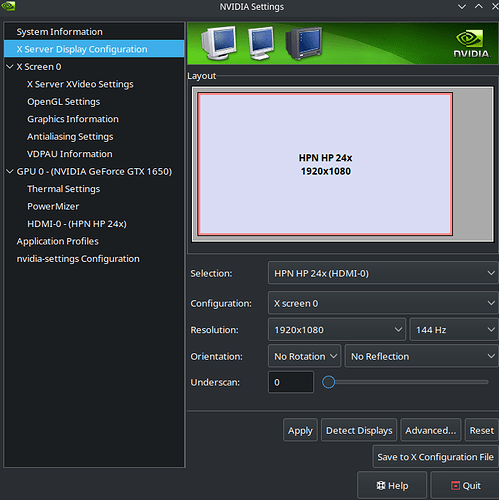 There is no synchronization anywhere. Looking I found the Arch wiki pages of Prime and Optimus, which I don’t even think what I’m looking for. I needed all this thread to force Vsync though my GPU panel because I have a low frame rate problem which fix is doing this.

Don’t worry it’s not spam to post about issues that you are having. I would create a new post with that specific issue and when you do make a new post also mention how you installed your Nvidia drivers and how you installed and set up Optimus manager because there are right and wrong ways to do it since Nvidia makes the whole process a pain. Always good to give as much information as you can when troubleshooting.