Mate & Xfce as far as the top 2 for stability? Although Plasma has been very good thus far.

Xfce Cinnamon Plasma and Mate all good in my books.

I’ve never used MATE really. For me, the most stable thing I’ve used has been Cinnamon.

As much as I love the 90s I just can’t use MATE for more than an hour or two.

If you are talking only about aesthetics, sure, default MATE is butt ugly, but with a nice dark theme, it can look pretty sexy.

A quick DDG search turned up pictures like these: 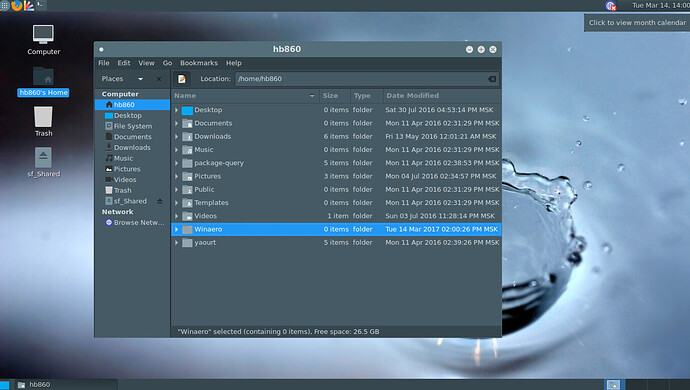 most default /stock are in your word " butt ugly "

Except Plasma, default/stock Plasma is gorgeous, even though I prefer a dark theme.

If you are talking only about aesthetics, sure, default MATE is butt ugly, but with a nice dark theme, it can look pretty sexy

Interesting. So that’s what a dark theme would look like back in the 90s.

@FredBezies & @jonathon do you both use Mate as a daily driver? Is it still the “lightest” DE? I like Plasma, but I’m wanting to try something different Cinnamon, Mate.

I’m actually giving it a go, and it’s surprisingly not bad. Does anyone know how to change the calendar to Monday start day though? 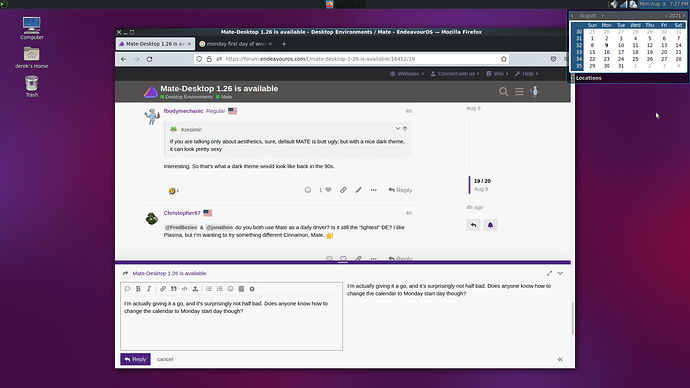 how to change the calendar to Monday start day

The Clock applet conforms to the value of LC_TIME in /etc/default/locale. This line, for example, would cause the calendar to start with Sunday:

This line would cause the calendar to start with Monday instead:

So that’s what a dark theme would look like back in the 90s.

Me, too. Today I’ve been playing with Ubuntu MATE.

Ubuntu MATE is very much better than I remember it being when I last had a look years ago. In particular, I can now choose a built-in theme that isn’t green; the Desktop now looks more modern (maybe more like Windows XP than Windows 95); performance is snappy; and MATE applications (Caja, Pluma and Terminal) work really well.

With little effort, here’s the desktop I ended up with: 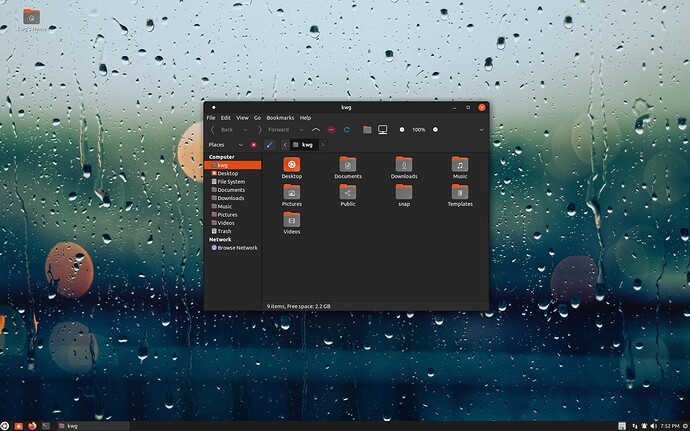 I selected the Redmond panel layout; applied the built-in Yaru-MATE-Orange-dark theme; and chose one of the included wallpapers. I edited gtk.css in order to reduce the padding around the icons at the right end of the panel. I increased the spacing between the launchers at the left end of the panel by positioning each launcher separately with the mouse (which seems more clunky than editing gtk.css, as I can do in Xfce, for example).

Setting up my usual workflow was also pretty easy, most of it done through apps in the excellent Control Center. (Oddly, Ubuntu MATE gives Favourites the British spelling but Center the American spelling.) However, I couldn’t find a way to create all of my keyboard shortcuts through the Keyboard Shortcuts app, requiring yet another visit to dconf Editor.

So, overall, I had a pretty good experience with MATE. In the end, though, I haven’t found a compelling reason to switch to MATE. I’ve been using Xfce and Openbox almost exclusively for years, and my experience with Cinnamon has also been very enjoyable.

I switched back to Gnome when Gnome 3.38.x was announced. I was fed up with the slow development of Mate. Seeing Mate 1.26 nearly 18 months after Mate 1.24 makes me think the team is either too small or Mate code is too complex to evolve on some points.

I would guess they are a fairly small group, and there’s not so much to elaborate on - if it works, don’t break it.

I haven’t noticed anything that doesn’t work. It’s certainly very different than my normal plasma desktop experience. I won’t be moving to MATE, but it’s definitely not bad at all. I’m once again impressed with a very wide array of what Linux has to offer theses days.

Their next big step will be to move to Wayland. Plasma, Gnome and Sway are Wayland compatible. Same for Xfce…

mate-panel is one of my least favourite parts of MATE, especially when compared to Xfce4’s panel. Its configuration is very fragile, e.g. changing screen resolution can move applets around.

Thinking about how I switched marco to i3 a while ago, it might be time to try…

Meh, doesn’t work properly. It will run from a terminal after log in, but not during the session start, and once running logging out doesn’t work (it needs a running Xfce4 session).

Why stay on MATE then? After a little use it feels very much like xfce light.

General feel, which I know is hard to quantify. To me, MATE just feels the more integrated and polished DE.