Kudos to the Openbox Team

I’ve been using Openbox for about 2 weeks on a Lenovo Z510 laptop and I’m really liking it. Kudos to the team that put together the Openbox EndeavourOS version. I’ve been busy modifying the vanilla version and adding several applications. It’s certainly usable straight out of the “box” with no modifications and it is an excellent starting point for creating a personal Openbox.

Prior to Openbox I had KDE/Plasma on both the laptop and desktop. While I still have KDE/Plasma** on the desktop, I would be comfortable replacing it with Openbox if KDE/Plasma becomes a burden. My Linux needs are simple and a sans-DE, stacking window manager environment is more than enough. Tiling on a small display is not compatible with my old eyes. 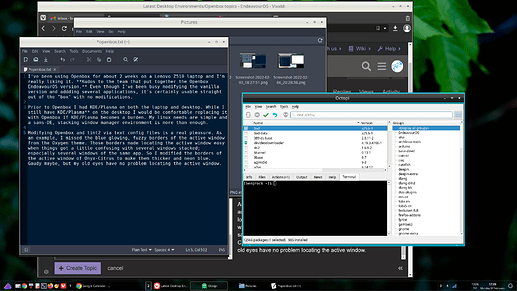 Thanks for sending pull request to make it even better

Thanks a lot! And thanks for your effort to help with the project

Meanwhile Mabox is praised on YT:

Mabox looks like a really a slick product. Manjaro has made it a lighter weight competitor to a DE. I’ll have to download it and see what I can steal appropriate mimic. There are some good ideas there and possibly some baggage too.

Edit: Oops. I made an assumption that Mabox was an official or at least a community edition, but looks like I was mistaken. While it is Manjaro based, uses Manjaro looking artwork and appears to maintain some connection/relationship with Manjaro it is not housed with Manjaro releases and is billed as a separate product with a separate forum.
maboxlinux.org
Further discussions of Mabox vs EndeavourOS Openbox probably should have its own discussion thread.

Yes, the Mabox spin was never officially acknowledged by the Manjaro devs far as I know. I just wanted to throw it in the ring when the EOS Openbox was mentioned.

The developer behind Mabox was actively involved with Manjaro - at least I have seen his username in several manjaro openbox scripts.

The same goes for Holmes which were involved in both JWM and Openbox.