Konsole: activity in session "profile 1" What does that means?

Yesterday, my internet was unstable… This (please refer to the screenshot) keeps popping up, that annoyed me.
I did realize this pop out several times when i am using computer… but not as many time as yesterday… it pops up every minute or so… so annoying…
What does it means ? why does it pops out ?

It is a notification sent by Konsole to alert you of activity in one of the interactive shell sessions running.

You probably unintentionally pressed Ctrl+Shift+A (Monitor for Activity) while using Konsole. This is a feature of Konsole (actually a very useful one, if you know how to use it) the purpose of which is to alert you if a process running in the interactive shell session does something. For example, you can have a shell script that is doing something that takes a long time and you want an alert when it is done, or when it is prompting you for input, etc…

o alert you if a process running in the interactive shell session does something. For example, you can have a shell script that is doing something that takes a long time and you want an alert when it is done, or when it is prompting you for input, etc…

No, i didn’t depressed ctrl+shift+A., it just pop up on and off.
Now, the way you explained, i think when this happened because it keeps detecting or connected my LAN and disconnected… (because that time my cable modem got connectivity issue , it was keeps trying to upstream), hence it keeps pops out that “notification” that some activity is enagaged… and disengaged.

Where can i see the “activity” that the konsole alerts me of activity in one of the interactive shell sessions ? in journalctl ? or where is console ? 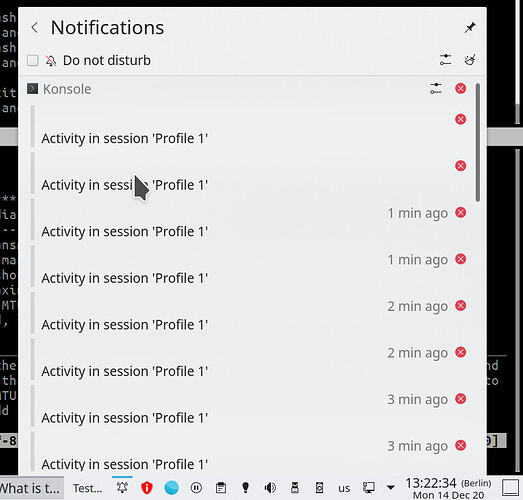 activity765×730 76.6 KB
This konsole only tell me got activity… but never tells me what they were.
Sometime it dissappeared… i can’t even find it. anymore until it pop out again.

Kresimir, you used term like "interactive shell session " … can you dilute it a bit more ? how to understand.

Kresimir, you used term like "interactive shell session " … can you dilute it a bit more ? how to understand.

Because of the word “shell” i went to read up (actually revisit) a lot of webpages to recall what is a shell …
got it recalled:
shell is just some some sort of program (bash shell, zsh shell …etc) or UI to interact with kernel…
or can say shell is just a program (such konsole, terminator, terminal) that translate human command into something kernel understand…
Or can say shell is somesort of UI for human to ask kernel something/ do something.

After reading all these, i know what shell is… but what is |“shell session” ?
I tell you what my thought on it is, if wrong pls correct me:
shell session is simply a period of time that shell is used.
for example, from 2pm just now i runned a terminal on bash … doing some tinkering of os and monitoring… and at 3pm, i typed “$quit” to get out of the bash… SO that is called a “shell session”… because i used bash shell for a period of time.

As for “Interactive shell session” … should simply be interactive between man and shell in a period of time… ?
LOL… i think i thinked too hard… over complicated something…

What is “the Shell”?

Simply put, the shell is a program that takes commands from the keyboard and gives them to the operating system to perform. In the old days, it was the only user interface available on a Unix-like system such as Linux. Nowadays, we have graphical user interfaces (GUIs) in addition to command line interfaces (CLIs) such as the shell.

On most Linux systems a program called bash (which stands for Bourne Again SHell, an enhanced version of the original Unix shell program, sh, written by Steve Bourne) acts as the shell program. Besides bash, there are other shell programs available for Linux systems. These include: ksh, tcsh and zsh.

sides bash, there are other shell programs available for Linux systems. These include: ksh, tcsh and zsh.

Yes, i understand what shell means now, because i have just read thru over 20 pages of different kind of explaination and metaphor on shell and kernel…
Hence i dare to ask here… else, i was afraid ppl will tell me why don’t you do research before asking!

A terminal is just a software where user and type and see the result. When user typed thru terminal (which is just a UI) , shell will interpret what the user typed to kernel, so that kernel understand and do work.
Hence, i can simply put, Terminal (such as terminator, konsole…) are nothing more but a program like firefox… the only difference is terminal is to interact with kernel thru shell in CLI mode instead of in GUI… am i right ?

TTY is same as terminal… nothing more.

No, i didn’t depressed ctrl+shift+A

Either that, or you enabled “Monitor for activity” from Konsole’s View options.

May i know these:

Q1.
Does GUI programs such as Gparted, Thunar… some part of it rely on shell to do work ?
for example, i can $lsblk to see my partitions in thru terminal which in term thru shell to kernel (this is in CLI mode)
BUT i can also use Gparted to see my partitions… But my question is, does gparted ultilized $lsblk to tell me the partitions ? or it straight away interact with kernel to get the result ?

to reorder it in another form:
Does go thru this route to talk to kernel to check hdd for partition ?
Gparted -> shell -> kernel ->harddisk
or
Gparted -> kernel - > hdd

er that, or you enabled “Monitor for activity” from

Oh ya… right… that option is highlighted…
What does that means anyway ? now i am currious…
There are:
Monitor for silence
Monitor for Activity
monitor for process finishing…

Where can i read up if it is too lengthy to explain ?
Anyway, i didn’t have any particular activity running in konsole… only vim, why it keeps popping up every now and then ? Especially when that day when my router is having upstream connectivity issue… that day, it pops every few seconds… made me crazy. but that day i think i did ran some ping to test the network if it is back to normal or not.

If the option is enabled, then every time you type something into Konsole, you’ll get that notification popup. Your pings would cause the notification to pop up. Anything that happens in that instance of Konsole will activate the popup.

Just uncheck that box and it won’t happen again.

You can disable the shortcut if you want - right-click on “Monitor for activity” and delete the shortcut. Then you never have to worry about accidentally activating it again.

thank you! so helpful, without any long comments