First time trying an RGB Keyboard and Mouse Combo with Mem-chanical Clicky Switches. I looked at a lot of these and decided on the Cooler Master MS121 set. Has RGB per key backlighting. Mouse is also RGB lighting with precision mouse sensor 3. It’s absolutely fantastic and i like it a lot and I’m not a gamer. The keyboard is so much better and the mouse is so precise… Love the lighting effects that you can do with it and also turn it off all with keys.

The MasterSet MS121 is your first step to grown-man gaming, with two tools to help you elevate your skills.It includes a durable keyboard outfitted with Mem-chanical Clicky switches, which abandon the mushiness of membranes for the clicky...

Let us know how it goes with that. I’ve been trying to find something better for a while now, but have been a bit put off with only ‘gaming’ keyboards having any kind of ‘touch’ - and most of those rely on Windows (shudder) software for adjustment. The only problem I can see is that I’m pretty used to the key layout on the Logitech ‘Comfort Wave’ - and that I’ve been running cordless for a while too so I need to know how long the cords are - as a minimum!

No that’s why i bought this one because it has it’s own firmware chip so the lighting is controlled by keys on the keyboard. It’s not a 100% full mechanical keyboard but kind of a hybrid. The mechanical sticky switches i really like and also the back lighting is awesome. You can select so many different lighting patterns, colors, or individual keys to light. Keyboard is fairly heavy so it doesn’t move around. Also has number keys and volume and music controls for playing video or music. Mouse is really niice too and the kit was $109.00 cdn +tax on Amazon.

Edit: I guess i would call it a semi-mechanical or hybrid keyboard. I didn’t want strickly a gaming keyboard and mouse. So i looked at a lot of the Cherry Keycap keyboards.

Yeah - I caught the mention that it was controllable by key combos. Still don’t know how long the cords are though!

I’ll go trolling on Amazon I guess. I still watch enough of my typing that having the letters wear off the keycaps is a bit of a problem here - although it makes an excuse for some of my typos!

Not sure how it would interfere if using i3 with key bindings but it’s mostly the f keys to change the lighting. So FN key and F1 or higher and hitting multiple times some keys. FN ESC to turn off and on or set back to default. It’s exactly what i wanted in terms of how it works. The cords are your normal lengths, long enough, and slightly heavier with ferrites molded into the ends of the cords.

@freebird54
I just want you to know I’m really liking this keyboard mouse combo. It reminds me of typing class back in high school. The base is heavy so it doesn’t move. The keys are just awesome because they are so precise. The mouse has back and forward buttons on the side. The RGB backlighting is awesome. It also has fw updates for lighting.

Gaming technology has improved a lot. I’m not a gamer, but recently I’ve also switched to a gaming mouse for my everyday work and the difference is huge. I got myself the cheapest most unremarkable (looks wise) wireless gaming mouse from Logitech: G305.
I am a Logitech keyboard and mice user for longer than I can remember (since the ball-mice days anyway). Their quality has declined over the years (I’ve replaced an m525), but the new wireless dongle and the new sensor make a huge difference compared to their Unified connection. The mouse is much more precise.

I thought I’d jump back in here, despite the passage of time

Just a couple of points. You mention that Logitech quality appears to have slipped a bit lately. I can add to that anecdotally. I was on my 3rd ‘Comfort Wave’ keyboard from Logitech, when I noticed that I was losing the letter from my keycaps - specifically A S D L E X C (if it matters). Some of those get used a LOT (the S from CTRL-S, L from start off my password for sudo, X and C from cut and paste. I don’t get the others though… no WASD use from games for instance…
The support apparently won’t do anything without receipts, which I unfortunately must have put into a ‘too safe’ place, and tell me that the keycaps can’t be switched out with the ones from the older (still usable) boards I have around the house. Replacement, or nothing…

So - off looking. @ricklinux inspired me to check gaming focused keyboards - and I ended up with Corsair. I tried out a K95 Platinum, but it doesn’t properly use its macros from the so-called onboard storage, not does it keep the lighting effects accessible - so I got a K68, with Cherry Blues. Apparent excellent build quality, quite a bit of lighting accessible from the keyboard itself, and even a quite good iCue substitute in ckb-next. Able to define a couple of custom light setups (soothing EndeavourOS purple with per-key-hit gradient highlighting, for example). Nice to work with. Doesn’t seem to have figured out the macro stuff yet, though. I’ll look at that later. Added in a cheap Corsair gaming mouse, and enjoying the improvement in accuracy there, too. Good thing it has selectable resolution though, as I don’t need it very high!

Just some info on my experience with it so far (1 week or so).

Cool! My default colors on my Cooler Master are purple! I looked at that one also but ended up with the Cooler Master set. The biggest reason i chose this one was that it has the lighting built into the keyboard via firmware and is controlled by function keys. I took a close up so it’s bright but it’s actually not as bright as it looks. More subtle than that! This one is not a quiet keyboard if that’s what you are looking for and I’m not sure if other mechanical keyboards are but this one has the clicky switches cherry keycap compatible. Mouse has variable DPI and lighting also. 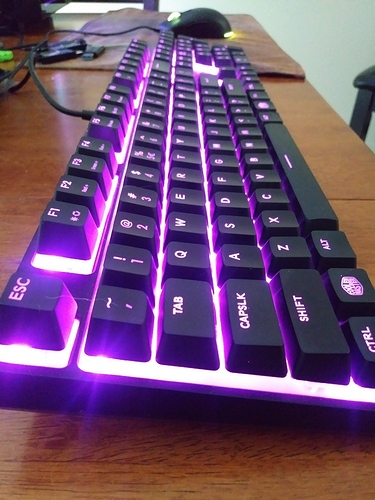 I’d have a bit more trouble to get a shot of mine - maybe I’ll try later. It lives in a slide-out drawer underneath the front of my desk

Mine has a function key combo driven of 10 presets, with the option to change speeds and directions of the effects too. But the fact that I can customize beyond that is kinda neat too. I look at the keyboard enough when I type that the ‘rainbow spiral’ and ‘rain falling’ and even the ripple and wave effects are a bit much for normal use - though impressive to contemplate sometimes! I always thought it would detract from the usage to have all these lights if not gaming - but it does not seem to be the case.

Yep …this one is similar it has so many lighting functions and you can set it anyway you want. Single key lighting through all kinds of patterns and different colors. It’s impressive! You can change speed, mode, colors, patterns etc etc. I actually like it a lot especially at night in darker times. It’s not hard on the eyes either. So i like it and i would get another. I have had the wave keyboard before which i also liked but it was time to try something different.

If we could get Comfort Wave with these clicky keys and the lighting, I’d have it immediately - I liked the different layout of the Home, End, Delete etc keys, and the curve was easier on the hands/wrists too. But - they don’t make it…

I tried to get a shot of the keyboard for you, but there is a deficiency either in my equipment, or me!

Lighting was fine, framing was fine, but I couldn’t get the focus to behave well - in fact it looked a right mess! You a professional on close-up photo work? I don’t think it was just dodging the cat that made it tough for me…

You are right if the wave keyboard had these keys and lighting it would be great!