KDE Screenshot takes screenshot of the past

Zoom screensharing also exhibits a similar behavior, where sometimes the windows I have open around 5 minutes ago (and closed before screen share) show up. I’m unsure if these issues are related.

Any help is appreciated.

But jokes aside, doesn’t happen for me on neither of my 2 computers running EOS/KDE. Although I didn’t take any screenshots the last few days. Was there an update recently?

Been using kde and spectacle for quite a while never seen that.

Woah! that is quite a feat.
The behaviour implies that spectacle is reading a screen buffer which is a few minutes old.
Assuming you are taking a full screenshot, what happens if you choose rectangular region?
BTW I’ve not seen this behaviour.

I would take a screenshot to demonstrate, but that’s the tool in question.

Attached is a picture taken from my phone. As you see when I press the PrtScr button on my laptop, spectacle activates but it takes a screenshot of my wallpaper, rather than the Firefox window that is open.

Choosing a rectangular area exhibits the same behavior. It jumps to the wallpaper and makes me draw a rectangle on that. 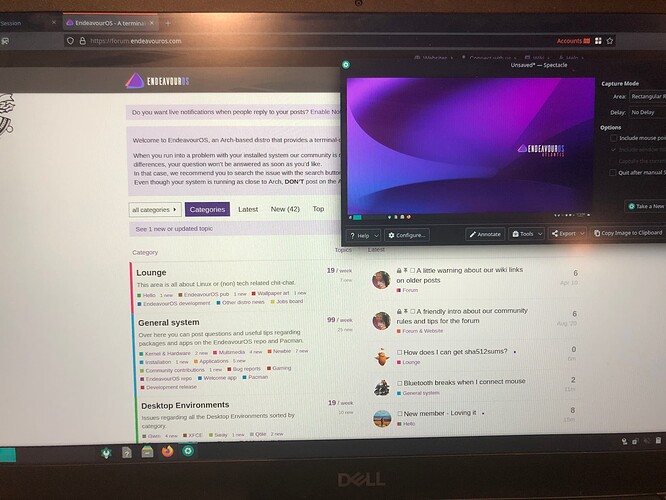 Strange. I just tried it (while running a timer to see if there is any delay) after updating the system and it works as expected.

Do you have a nvidia gpu?