I’ve been having a terrible time trying to get Bluetooth working on Linux and that continues after upgrading to the AX210 chip.
Bus 001 Device 005: ID 8087:0032 Intel Corp.
I’ve installed the chip and WiFi does work great, I’m able to get 200mbps with low ping fairly consistently so I’m fairly sure I installed the chip correctly. However, while there is no immediate issue with the Bluetooth turning on, it is unable to pickup any device even nearby when trying to pair.
Output of dmesg | grep firmware:

Output of hciconfig -a:

It looks like the device is being properly recognized (I think) but something’s wrong with scanning for devices and it’s unable to see anything. I’m convinced the hardware is fine since the WiFi has improved substantially after installing this chip and there is no noticeable issue with WiFi. Kernel documentation shows that this chip should be supported after the 5.10 kernel and I have 5.12.6-arch1-1 . I’m at a loss for what to do and would appreciate any help and can give more info as needed.

Hi,
Have you already checked up on EnOS’ wiki on Bluetooth?

We do not enable Bluetooth by default, because of several security risks. To get Bluetooth working you need to enter this in the terminal: sudo pacman -S –needed bluez bluez-utils pulseaudio-…

What is the output of hwinfo --bluetooth?
You might have to install hwinfo.
If it is a combined wifi/bluetooth chip they’re supposed to have at least different device IDs.

Try using bluetoothctl to get it poweron, list, scan, pair, connect, register, trust etc. It may just be a matter of going through it once to get it to register and pair up the device properly and then it will continue to work.

Yes I’ve done this already. Bluetooth is enabled on startup since I login with a Bluetooth keyboard (temporarily on a separate dongle).

lsusb lists the Bluetooth device with ID 0032 while lspci lists the WiFi module as 2725.
Output of hwinfo --bluetooth:

@ricklinux
I also tried connecting through bluetoothctl but there are no visible devices. In order I: selected the controller, powered on, set pairable on, set discoverable on, and then scan on.

Have you tried the following? Edit the .conf file for iwlwifi and add coexist.

Are you sure that bluetooth is started/enabled?
What’s the output of systemctl status bluetooth.service?

Not sure also what firmware the card is using but you could check.

Once again, the issue is not with enabling the device since it’s enabled and can discover.
As for firmware, iwlwifi is supposed to work with this chip for the kernel I’m using (and it does since WiFi works great) but clearly is not the case with Bluetooth.

iwlwifi is responsible for your wifi, which works, according to your statement. So there is obviously no problem with that one.
btusb is the driver used for the bluetooth device. This one is causing the trouble, if I understand your earlier posts correctly.

since it’s enabled and can discover.

I’ve tried to pair 4 devices; pair of headphones, my phone, my keyboard, and a pair of earbuds. When I normally scan for Bluetooth devices from other controllers (my phone for example) at least a dozen or so show up from nearby which is not the case for my internal chip. The system is not visible to my phone either.

Additionally, I checked some source code for btusb here which has driver info for my exact device id as BTUSB_INTEL_NEWGEN . However the output of lsmod | grep bluetooth does not reveal such a driver:

Is it possible this is an issue with btusb?

Did you try the coexist?

About iwldvm support and known issues

Having Wi-Fi and Bluetooth running at the same time is a challenge. These scenarios have been tested thoroughly on 7260 and up, less so on earlier devices. This is why some people may face issues with devices that are handled by iwldvm. For users of these devices who have problems when Wi-Fi and Bluetooth are running concurrently, we suggest to disable BT Coex by loading iwlwifi with bt_coex_active=0 as a module parameter.

Which DE are you using?
I added a screenshot (using KDE), so you can see, how to make your system visible for the devices you want to connect to. 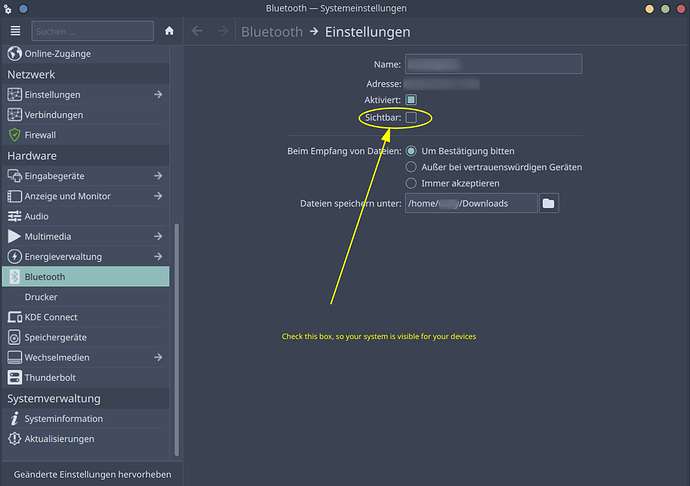 I’m not using WiFi at all so coexistence should not be an issue. I have enabled the module parameter as well.
I am on gnome so I do not have the bluedevil gui although I have enabled discoverable through bluetoothctl by selecting the controller and typing discoverable on which is successful.
Restarting bluetooth after modprobe btusb doesn’t do anything either.
As for the LTS kernel, I have tried it before and it did not even recognize that I had a WiFi chip nor did it recognize an available Bluetooth controller which at least works for my current kernel.

I’m not a Gnome user. Have you tried gnome-bluetooth?