Installing an older version of an AUR git package

Something weird happened with this package “anime-downloader-git” in the AUR repo. When installed it gives me a version number that is newer than the one in the author’s git page.

This doesn’t show up on the author’s git page 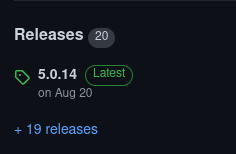 However according to the creator’s git page the latest release is 5.0.14 and the newer version does not exist. It also seems the new 5.0.15 version is broken as well.

It is not running, I even rebooted made sure there was nothing running.

Is there a way I can install the 5.0.14 package? as was working for me all along on my other computer until this 5.0.15 version showed up in the AUR.

However, you could easily edit the PKGBUILD to install the latest version. Just change the name to anime-downloader and have it pull the 5.0.14 tag.

I pulled the PKGBUILD file and changed pkgname to remove the ending “.git” then ran “makepkg -si” but it gave me the same new version. Am I doing something wrong here?

Am I doing something wrong here?

Yes, you didn’t follow the rest of the instructions…

Give me a second and I will show you

If you save that, when the next version comes out you can just change the pkgver= line to the new version and run it again.

Thats perfect, but actually I was thinking of jumping aboard and be a maintainer for this package. I have quite a bit of learning to do before that happens though, coming from RHEL and Debian.

That would essentially be the same process except that you would be updating it for everyone else at the same time.

Take a look at the AUR guidelines to get you started.

Also, since it seems that since python-pysmartdl no longer exists, you may have to add that to the AUR as well.