In general, the best way to prepare for potential problems is making sure you have a working (tried and tested) backup of all of your personal data before you do anything serious. Everything else can be reinstalled within a reasonable time.

What do you mean by ‘backup’? I would like to point out that I have no important files on my computer, so there’s no point in backing up personal data. So do I just keep a USB which has windows 10 in case anything goes wrong? I don’t have to install any ‘recovery’ programmes, do I? Would it be ok to create a system restore point?
Also, isn’t it customary to have three partitions instead of two, i.e. shouldn’t one have root, swap and a home partition?

Also, isn’t it customary to have three partitions instead of two, i.e. shouldn’t one have root, swap and a home partition

Not as necessary as it used to be - and I gave that up a while ago. What I find to be optimal is to have root and swap (and the EFI of course) - and the data separation can be implemented in other ways. Depending on your available drives and partitions, you might find it advantageous to have a data partition - linked to the ‘standard’ directories of Documents, Downloads, Music, Pictures, Videos etc. Then you can treat your data backups differently than ‘convenience OS-related checkpoints’ (as in those from Timeshift, for example) which is a definite plus.

Actually, of course - you can implement this later if desired - but I wouldn’t bother with a separate /home any more.

Is there a problem if my power goes out during the installation? I don’t have a UPS

That will be a problem no matter what.

If, for some reason, the installer freezes, then what do I do?

How long does an installation usually take?

That depends - I can reinstall my system in 5-10 minutes

Can I change things like system language, region, keyboard layout etc after installation?

My PC has 1 hdd which is split into 3 partitions: C,D and F. I would like to install EOS on F. Now, it is formatted as an NTFS partition

That depends on your current partition schema

Say I’ve created a live USB using Rufus. Now, do I eject the USB, go into my boot menu and change the boot order, then plug in my USB or do I plug in my USB before turning on my computer?

Don’t - use the ventoy project instead

Just reboot and use your systems boot override - e.g. F7 or F12

How much space should my root partition have? Also, considering I have 6gb RAM, can I allocate 8GB for swap?

That dependes on your available diskspace - but EndeavourOS can run on as little as 10G and 1GB RAM - depending on the DE installed.

I was checking out the Calamares installer tips page and I did not understand the following: “When you use the same EFI/fat32 partition that Windows uses for boot, DO NOT FORMAT THE PARTITION. Just to be on the safe side, double-check that you didn’t format it before clicking on the install button.”
At what stage of the installation do I have to look out for this?

The reason you are advised not to format it is obvious - you will prevent Windows from booting. Watch out - if you are doing a manual partitioning but as Calamares usually default to not formatting existing partitions - you should be safe.

What is the worst case scenario?

What can you imagine?

I think you misunderstood me (or, I misunderstood you). I was asking whether I should create a restore point in Windows in case the EndeavourOS installation goes wrong. Also, what are the disadvantages of having a /home?

Probably my miss - but no matter. Anyway - splitting off /home just seems to lead to partition proliferation, and serves no particular purpose anymore. I used to have a nightmare setup with multiple distros with multiple partitions (separate root /boot /home data at least for each) and things got ‘untidy’ - especially with grub in the middle!

As for the Windows restore point - as you wish. I can’t think of many scenarios where it would help - but none where it will hurt!

Can you please go in-depth about the ‘data’ partition? It seems interesting. Also, if I keep everything in the root partition, I won’t have to type ‘sudo’, will I?

It won’t have any effect on when you have to type ‘sudo’ - that is just something that needs ‘thought’ before you do it. Sudo is just temporary access to an ‘Administrator’ account - to make sure you have the system access to do whatever that command is - a lot simpler than having to log out and log back in as the ‘administrator’ to do something. Where the files are ‘mounted’ in the file system is not significant.

The data partition is just that - a separate partition where you keep your data. There are certain ‘standard’ directories created under the /home directory - as I mentioned above. An example of a ‘soft link’ would be:

Once that is done, the Downloads directory would actually look in the data partition for the contents of Downloads, and you would not see anything stored in /home except the link to the data. Then - when making backups of your data - you would only need to backup the actual data.

If you use something like Timeshift to handle the system restore stuff, then having your data backed up by other means means that even rebuilding from scratch would be easy.

Ok, I won’t have to rename the EFI partition, will I? According to videos, it will be named something like /deb/sda/2. Also I am not supposed to get an extra dropdown box at the bottom of the partitioning scheme saying ‘Install Boot Loader’, right? This only popped up once during a virtualbox install. Also what’s up with the 8 MB partition I’m supposed to make?

Ok, I won’t have to rename the EFI partition, will I?

No, don’t do anything to it, simply use it. Installer will ask a mount path to it, and select the path (most probably /boot/efi or something very similar).
Remember that EFI partition already contains your Windows boot stuff, so don’t otherwise touch it. EndeavourOS installer simply adds some stuff there.

According to videos, it will be named something like /deb/sda/2.

What videos exactly? It already exists there if you have Windows installed. /t could be a device /dev/sda2 or something else. Note that in sda2 the ‘a’ means the first disk, and 2 means the second partition on that disk. You should look at your partitions before installing with the Partition manager.

Also I am not supposed to get an extra dropdown box at the bottom of the partitioning scheme saying ‘Install Boot Loader’, right? This only popped up once during a virtualbox install.

You have an UEFI machine, right? Virtualbox defaults to MBR disks, and UEFI machines use a different booting firmware. Installer installs some booting stuff to the EFI partition.

From some Linux live usb, post the output of the sudo parted -l. This could help any forum member to have a picture of your disk.

Is the OP referring to an 8GB Swap partition?

Also, @OrangeBoy it is reccomended by most to have a swap partition, or file at least. Ref here for more info.

@OrangeBoy
How much RAM do you have? And are you planning to use apps that use lots of RAM?

Ok, my bad, it only tells you to make an 8 mb partition if you want to use GPT on bios (I forgot to enable EFI in virtualbox). 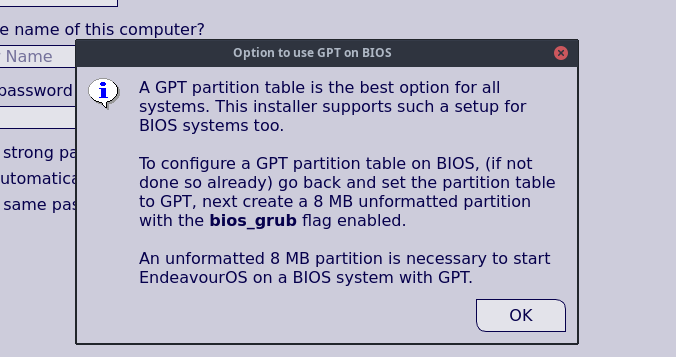 Are you installing into a virtual machine or bare metal?

Nowadays those flags are not so important as they used to be, as far as I know.
But the bios_grub flag probably is needed, if that is what you want or need to do.

@OrangeBoy
Does the computer you are installing on have UEFI? If so then if you are installing in virtual-box you can enable UEFI and if you are doing manual partitions then create 300m efi formatted Fat32 and mark it /boot/efi and select /boot in the window below. Then create your other partitions for / and also for /home if you so desire and also swap if you want. In virtual box make sure you give it 2GB memory and i usually go 18 GB for the size and make sure the display is set VBoxSVGA and check 3D and then when you go to start the vm make sure the display in that window also is set to VBoxSVGA. Then start the vm and browse to the ISO file to load. Then when the ISO starts to load maximize the Window. Then go to top left in vbox and under view set the virtual screen to your monitor resolution as soon as you see the sizes available to select. Then when the ISO loads it will automatically switch to the proper resolution if you get it set before it gets too far. Then your good.

Once installed and you power off virtualbox i do two things. Go into settings and uncheck the optical drive. Then make sure before you go to start the vm it is set to VBoxSVGA. Once you start it and it has had it’s first run the settings will stay unless you go into the settings and change anything.

Edit: Also just in case i forgot i usually bump up the video memory to 128 and there are settings for the number of processor cores also.

I understand that the user named ‘Root’ said to use Ventoy but seeing as I don’t need it’s features, I’m more comfortable with using Rufus instead. Now, my system uses UEFI, so my partition scheme will use GPT, right? So when burning my ISO to rufus, do I select MBR (which Rufus claims to be compatible with both UEFI or BIOS), or do I select GPT? Also, in Rufus, what file system should I choose, FAT32 or NTFS? Also, what should the cluster size be? 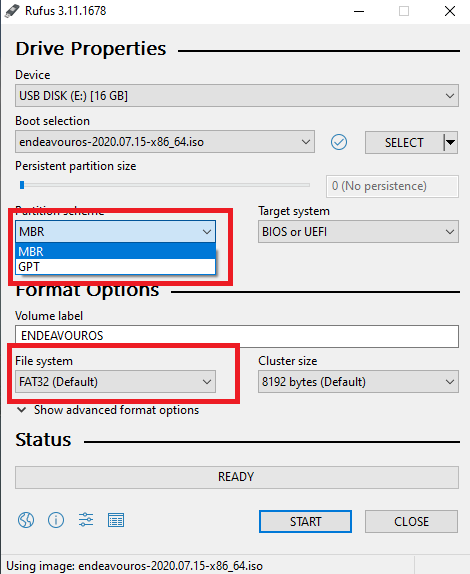 Edit: Ok so I chose GPT and left it as FAT32 and the installation went perfectly (well, I haven’t tried booting into windows yet so I can’t say anything about that). Thanks for all your help.