I am trying again to get hybrid graphics working on my Thinkpad Extreme. I downloaded the new April release to overwrite an existing EndeavourOS installation, but selecting the option of using the proprietary Nvidia drivers caused an endless loop indicating an error in a module fbmon(?), so I installed the standard version but selected the ‘use Nvidia proprietary drivers’ option during installation. However, the system still seemed to be using the nouveau version.

I then tried ‘nvidia-installer-dkms -t’ which indicated no errors, so I proceeded to ‘sudo nvidia-installer-dkms’ which downloaded some files and then required a reboot. However, the reboot hung while starting the display manager (lightdm), the same problem I had several months ago. So I reinstalled the nouveau driver and following an earlier discussion in this forum, I used ‘garuda-settings-manager’ from the AUR to install the propietary drivers. This time I was able to reboot, and as the attached screenshot show, it looks like the hybrid option is selected, but the external monitor which runs off the nvidia card using HDMI is not detected. The external monitor is detected on my Popos and Windows 10 partitions.

Is there anything else I should try? Thanks. 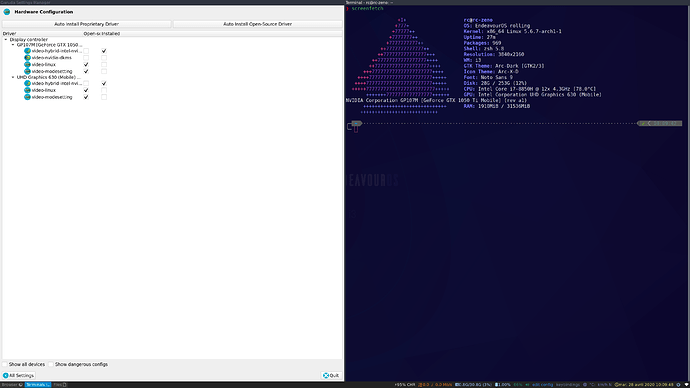 I just installed optimus-manager, then tried

try this and reboot

I tried that and rebooted, but it did not switch to nvidia, even after rebooting a couple of times.

After doing that it does run the nvidia driver and the external monitor is detected. But there are still a couple of issues. The two monitors have different resolutions, so right now the displays are mirrored and the display on the high-res laptop monitor takes up only a quarter of the screen. Can you suggest a fix for this? Thanks.

Since you are using
I3
Try arandr
And also
There autorandr

https://www.archlinux.org/packages/community/x86_64/autorandr/
See if that helps

I was able to get the display issue fixed by using arandr. I also installed autorandr and will look into how to set it up to autodetect the external monitor. I mostly run the laptop plugged in, but I will check to see how battery life is affected with the nvidia graphics always on.

Thanks for all your help.