How to return to HD after being denied access?

When installing the EOS, I opted for HD encryption, but if I type the wrong password for some reason it goes into “b rescue” mode and for lack of knowledge I don’t know how to return the HD functionality via command. I can only turn off the desktop with the power button and restart the desktop and enter the correct password. 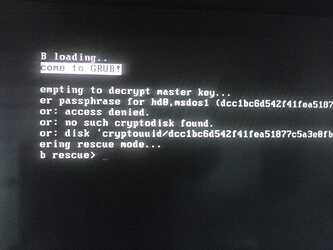 Note: Before having installed EndeavorsOS flavored Gnome 40, I had installed Pop OS 21.04 Cosmic and in this regard, it is friendlier, where it has a more polished screen and does not go into “b rescue” mode. There is a screen centered with successful or unsuccessful password information.
Could the EOS developer team do something about it?

Thank you in advance for your attention

Note: Before having installed EndeavorsOS flavored Gnome 40, I had installed Pop OS 21.04 Cosmic and in this regard, it is friendlier, where it has a more polished screen and does not go into “b rescue” mode. There is a screen centered with successful or unsuccessful password information.
Could the EOS developer team do something about it?

I haven’t checked lately but PopOS is probably using an unencrypted /boot and then using plymouth or something similar to improve the aesthetics of the process.

By default, EndeavourOS uses an encrypted /boot which means that grub has to do the unlocking. Unfortunately, grub doesn’t have the more flexible/attractive unlock screen options that exist in the initramfs. grub is pretty limited in this regard.

It is a tradeoff between increased privacy/security and ease of use/aesthetics.

Thanks for the feedback!

If possible and if desired, download an ISO of POPOS Cosmic 21.04 and install it in Virtual Box to be sure. I believe the screen uses encrypted code yes.

I will look at it later and check for you.

OK, so I checked. While, technically speaking, it doesn’t have an unencrypted /boot, it sort of does.

The initrds and kernels that an Arch distro stores in /boot, PopOS stores in /boot/efi so they are not encrypted. Then they use plymouth for the more attractive password box.

Keep in mind, you could also adjust your EndeavourOS install to work like this if it is important to you. You have the control. That just isn’t how it works by default.

Wouldn’t there be another form of less abrupt warning in which the user, upon mistaking the password, which can occur due to numerous factors, can redo it again without having to turn off the desktop?

Couldn’t it be the same as what we do on the login screen, where we can type again without having to restart the Desktop when there’s a password typing error? What can developers provide users on this issue? Is it complicated and unsafe to make any changes in this regard?

I think, first we need to clarify something. The functionality you are referring to is provided by grub when the initrams are encrypted. Changing it would require changes to grub itself. That isn’t something EndeavourOS can do.

However, what could be done, is that the initrams could be placed on an unencrypted partition. If that was done, it could then work like you want it to. It is up to the devs if that is a path they want to consider. It would involve sacrificing a small amount security/privacy to get a small amount of additional functionality.

That being said, you could modify your install to work that way. Even easier you could reinstall with an unencrypted /boot and it would automatically work the way you are describing.