I stumbled across this today. I have been using xmodmap for years to do this, but it has issues, it has a tendency to stop working.

Add the following code within the { }s of xkb_symbols “basic”.

Ensure that there are no syntax errors

If there are syntax errors, the command will refuse to load the layout.

The Capslock should be converted to Hyper now. You can test it by setting shortcuts to something in your window manager.

setxkbmap only loads the layout for current session. To make the changes permanent, use the following command

You will probably want to add to your startup:

To regain caps lock function (by pressing both shifts together).

Plasma cannot see the hyper key, but sxhkd can be used to add additional hotkeys.

I’m assuming this is for XFCE?

Gnome (in tweaks) and Plasma have this functionality built right in and just need to have the box checked. I’ve been using caps as an extra super key for quite a while now.

Hyper is not super, it is a totally seperate modifier dating back to the old lisp machines (space-cadet keyboard - a thing of beauty and fear!).

The space-cadet keyboard is a keyboard designed by John L. Kulp in 1978 and used on Lisp machines at Massachusetts Institute of Technology (MIT), which inspired several still-current jargon terms in the field of computer science and influenced the design of Emacs. It was inspired by the Knight keyboard, which was developed for the Knight TV system, used with MIT's Incompatible Timesharing System. The space-cadet keyboard was equipped with seven modifier keys: four keys for bucky bits (⎈ Control,...

So I now have: 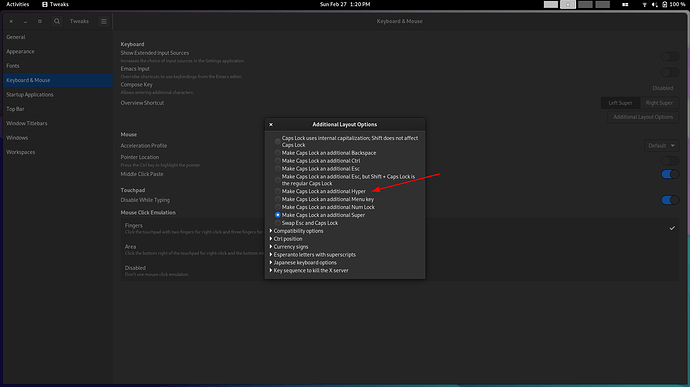 I’m not aware of a way of doing it in xfce - and I’ll have Cinnamon up and going shortly. It’s been a while, but I can’t recall if Cinnamon has the setting or not. xfce is definitely the least refined of the big 3 desktops.

That being said, it’s super stable because it’s slow going on new features.

Easy enough (though not on GUI) to change the Caps lock to another key, or stop it from acting - but I don’t know how to set ‘Hyper’.