How do I program a shortcut to ONLY execute when I release the button for xfce? 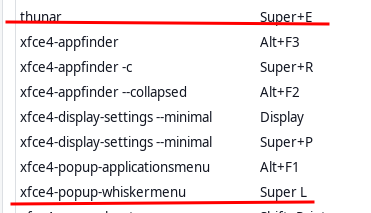 As you can see over here, currently the whiskermenu only opens up when I press the super key. But it opens up when I press the button without releasing it. This is an issue as you can see if I wanted to open something else such as thunar, I have to press super+E which causes whisker to open up as well which is something I don’t want. Any ideas how I can change it to open up only when I release the key?

Bind the whisker menu to Alt+F1. This works the same as Super, except it triggers properly when Super is released.

That’s the standard way to set up a shortcut that triggers on release of Super.

But I just did that and it doesn’t quite work

I did this, and like when I press the super key it won’t open the whisker menu

If it works with that, then you need to add that command to the autostart, see this:

Should I run this after I changed the keyboard shortcuts through xfce?

Yes. Set the shortcut as you did above to Alt+F1, and then just run this command in the terminal to see whether it works. If it does, you have to run it on every boot, that’s why you add it in the autostart settings.

So I decided to add this to my /etc/rc.local file as this is where I have saved other commands to run upon start

Yeah, that’s fine, too, I think. The post on the Arch forum I linked above suggested it being added through xfce settings, but if you prefer it in rc.local, I don’t think it should make a difference… If it works, it works

Yep, thanks for your help mate =D

Although I really prefer if I could change xfce to execute the command upon key released to avoid having such complexity setup, you wouldn’t happen to know how to do this, right mate?

you wouldn’t happen to know how to do this, right mate?

No, I’m afraid not. I could be wrong, but I assume there’s no setting like that in xfce.

But if this does what you want it to do, I see nothing wrong with it. That’s how it’s setup on Plasma as well, all shortcuts trigger the moment they are pressed, except Super, which triggers Alt+F1 when released.