How do I get flash to work on chromium/brave browser

On both chromium and brave, I have enabled flash

But I get this error on both browsers. 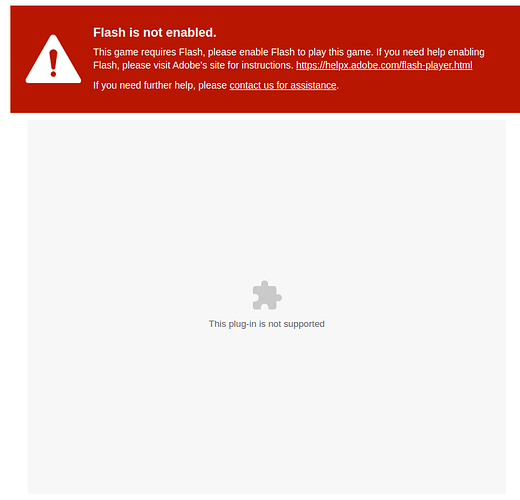 I have not been prompted at all to enable flash, it instead states This plug-in is not supported. On Windows I was able to get Chrome to work so I am not too sure why its not working on Chromium nor Brave on Linux?

Isn’t flash DEAD and utterly discontinued and no longer supported in any browser as of this month? Or is it next month?

Flash is deceased. However…

should make sure the plugin is there

I don’t think it is dead otherwise why it works on Windows?

Ok I have done that what would I do to ensure that the browser uses pepper-flash? Also is pepper-flash open source?

Not open source, as Google maintains it.
Just because it works on windows doesn’t mean much. Google Chrome bundles the full flash player pepper-flash into itself. Chromium, which is the base source code of Chrome, doesn’t. If you put Chromium onto Windows it won’t work with flash until you load the pepper flash or Adobe flash player.

Flash is deprecated. Dead. A nasty security hole for anyone using PCs since 2000. https://en.wikipedia.org/wiki/Adobe_Flash
https://www.wired.com/2015/07/adobe-flash-player-die/

Where would I get chrome from then? Cause I always have difficulty finding chrome?

Flash is deprecated. Dead. A nasty security hole for anyone using PCs since 2000. https://en.wikipedia.org/wiki/Adobe_Flash
https://www.wired.com/2015/07/adobe-flash-player-die/

Yeah that is a bit unfortunate, but there are some things I wish to run which only runs with flash

Will get the latest Google Chrome. But why bother? You’ve already got Chromium, and now pepper-flash installed, so after restarting Chromium you should be able to use flash-based applications. Those sites that are running on flash apps must surely realise that their time is nearly up…so look forward to native HTML5 / javascript apps soon?
In the meantime, do your backups. Flash vulnerabilities have been known to even affect Linux, and you wouldn’t want to lose data to them.

I always install flash even although eventually it will be redundant as Google has taken over. I install adobe flash and pepper flash.

@unix_lover
BTW there was just an update to both Adobe Flash and Pepper Flash!

Edit: I know you are using Brave browser which i do not. Firefox has flash plugin. Another reason why i use it besides many more.