How do I find out what WiFi drivers I'm using/ I need?

I’m trying to work around the live ISO not having wifi until I install the OS through a wired connection. How do I work out what WiFi drivers I have installed/I need?

The output from inxi -Na is:

Based on that I have copied these over to a USB:

My plan is to install them whilst booted into the live ISO.

Do I need any other drivers? Do I need to turn the WiFi on through the terminal after installing the drivers? 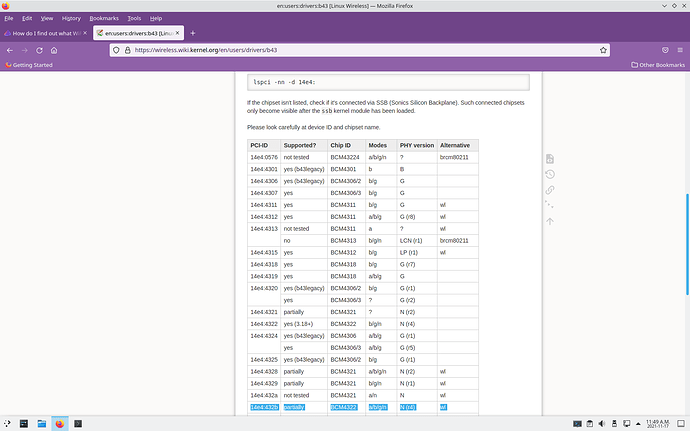 Have you tried it on the live ISO to see whether it works because broadcom-wl-dkms is on it. Not sure it works or it uses the b43?

it’s a mac so it has it’s own challenges.

Thanks for helping me out with this I really appreciate it.

I’ve only tried the broadcom-wl-dkms. I installed it from a USB stick, but I couldn’t get it to work still. I didn’t know if I needed to specifically tell the WiFi to turn on or refresh the live envrionment somehow so that it new the driver was there. If its not that, I’m not sure what driver its using.

I ran yay -Ss broadcom | grep 4322 and that returns nothing.

and all the related drivers come up but how do I know which to choose?

Is there a way to determine what driver the online installer used? Because thats the working one.

It will be broadcom-wl-dkms i would think. What does it show on the installed system running?

Indeed it does, but its mostly working luckily. I just need to determine what driver the ISO online installer used as it works after a full install.

It will be broadcom-wl-dkms i would think.

Perhaps I’m doing something wrong then. I just ran pacman -U /path/to/driver do I need to do something else?

You’ll see it shows which one is installed

I collect old Macbooks with Broadcom.

For my situation the kernel already had open source drivers. Back in an old install I just removed broadcom-wl-dkms, reboot and WiFi works. Any new installs going forward I untick from installer now.

BCM4322 - Looks like same, kernel has built in drivers but broadcom-wl or broadcom-wl-dkms has to be removed and reboot.

Anyway I’m not an expert but this was same for few old Macbooks I have.

As @QAP said also it could be using the kernel module and not the installed broadcom-wl-dkms but you would have to uninstall or blacklist the broadcom-wl-dkms package and reboot in order to confirm that. The driver just say’s wl so I’m not 100% sure.