How did I do this? (SurfShark App)

a few days ago I installed EndeavourOS on my old PC and Surfshark with GUI. I was very surprised that there was a pakage which looks like the native App 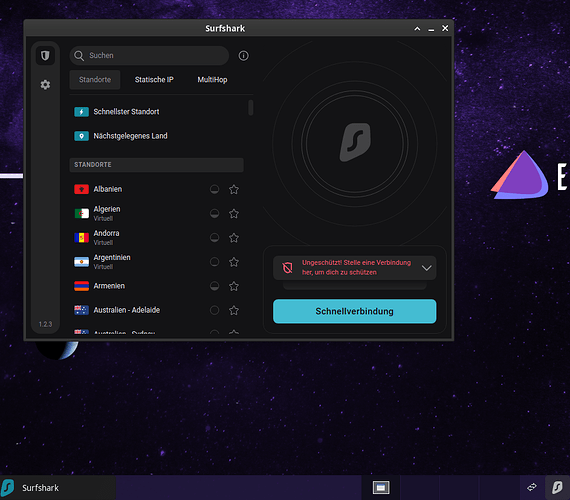 A day later I installed EndeavourOS on my laptop, but when I searched for the SurfShark GUI pakage I couldn’t find it in AUR.

The package I’m looking for is this 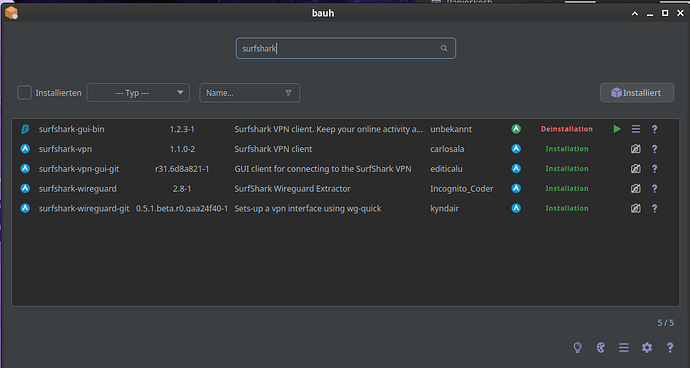 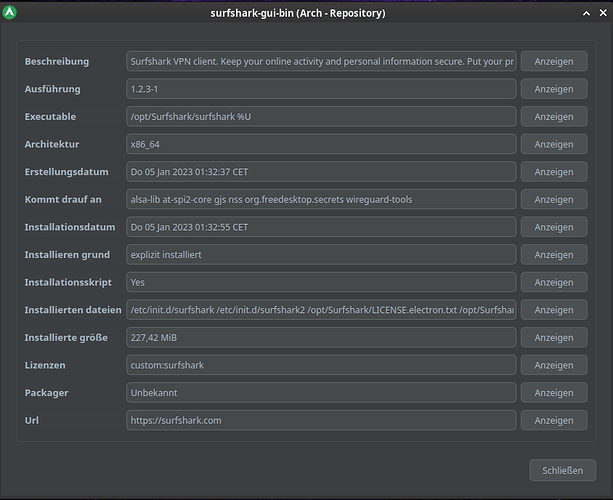 Does anyone know this pakage and where I can find it? I can’t remember.

surfshark-vpn-gui-git is the one you want. Git version is the latest and greatest.

Seems to be gone:

Sorry, the page you’ve requested does not exist.

I tried this one you mentioned but the gui seems to be different and I encountered an DNS leak with that you mentioned.

surfshark-vpn-gui is no longer in the repos. I don’t know if it still is in the chaotic-aur

It downloads the source directly so I don’t see anything sus.

Seems to be gone:

Thanks for the warning. Then I’ll remove it immediately. Still wondering how it could appear for install on bauh. Maybe a mirror server where it was not removed yet?

The packager took an existing Debian package and wrapped it up so that Arch/EOS would install it. Another Arch packager saw that the original Debian package was a dud - it was badly packaged for Debian - and nuked the whole thing from the AUR.

There are a lot of packages ending in -bin in the AUR which are “caution advised” for that reason - they are wrapping up something packaged outside Arch which may not have had quality control, or even skill, applied to the original package.

I use the Chromium extension for Surfshark. It has the disadvantage that it only puts Chromium network traffic through the VPN, but that’s enough here. (I run two browsers - Chromium with Surfshark and Firefox with no VPN).

I don’t know if you necessarily want to use a gui for surfshark.
And maybe you already know how to add .opnvpn configs to your system.
This a setup i use for a while now. Debian and Arch.

My desktop is xfce4.

I use Surfshark’s .opnvpn configs with network-manager.
Downloaded from their website.
For each location, add the .openvpn you need.
Create username and password for external apps, on the website of Surfshark, in your account.

The disadvantage is that you can’t use all the functions like in the gui version.
E.g. the killswitch.

You could create a script with rules for ufw, ifthere is no vpn connection.
If that’s important.
You can find such a script on github.

I use xfce4-panel with a genmon script to easily see if there is a vpn connection. The tooltip shows the output of ipgeo.
And when I click It checks the speed with yad+speedtest-cli.

the GUI variant makes everything a bit easier and faster. I have also connected via the terminal. But this requires every time a new input of the access data and the standard test of https://dnsleaktest.com/ shows me that there is probably a data leak. Funnily enough, the test page from SurfShark also shows me a data leak and recommends a SurfShark subscription, even though I’m using SurfShark at the moment. xD
The problems mentioned above do not exist with the GUI.