I am 37 years old, from Vienna working as a IT - Technician for 3 years now.

I was a gamer, acquired some basic programming skills in C, VB and of course HTML and PHP.
I always had just one machine and gaming was my priority in my life. So i sticked to Redmonds best, with some excursions into the world of unix.
My first Linux, ofc, was a redhat CD i had in a magazine.
I installed it and it was just aweful. (used it for like 15 minutes or so)
My first real attempt to use linux was gentoo in 2003. It was a harsh entry into the world of linux, it took me a full week to install it, but i was very proud when i made it. I’ve used it for 1 month or so, then my passion for gaming led me back to windows. (i had no idea about dual booting, nor a second machine to use it on … funds were limited this time)
I’ve managed to install arch several time, and broke it several times.
I’ve used NixOS with KVM/QEMU VFIO Windows 10 on it for a long time (nearly half a year).
Things changed when i came into a family with 3 children and was lucky to get my actual job at the same time.
No time for gaming anymore … it became boring anyways. … no use for windows on my main machine anymore.

For work i am using a Notebook (it was my first notebook), sure with Windows 10 / 11, because “use what your customers using”.
For servers we are using Windows and Linux ones (mostly ubuntu).
I bought myself an iPhone (again … my first smartphone was a iphone 3gs) and lately an M1 Macbook Air.
I’ve upgraded my main Machine to an AMD Ryzen 5900X with 32 GB of RAM, because you know … working is increasing your funds, and at some point you have to fullfill your childish dreams g
And i decided to give desktop linux another shot.

An experienced noob trying to fulltime switch to Linux on his main production machine.

Thats what i want to achieve with EOS on my main machine:

Using it for Home-Office:

Using it for learning:

Using it for gaming:

Using it remotely from my macbook:

i am using EOS with i3wm btw

Feel free to ask if you have any questions. 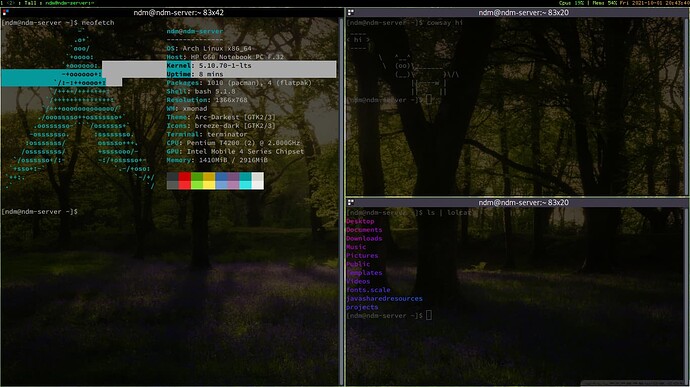 @aw4r3 Hello and welcome to the forum and have a nice stay!

Wow. I see you are really experienced.
I’ve been on linux since 2000.
Never enjoyed a community or a distro like EOS.

I’m sure you will enjoy it here.
You are welcome to our wonderful world.

Welcome to the purple side and to this amazing linux distro, hope you have a good journey as you discover and learn about linux

You sound like you’re going to fit in nicely here. Welcome!

Hello from Austria to Austria