I dont use XFCE and I love Gnome, I am also OCD when it comes to my desktop, yes this is for those telling me to just install it.

I would love to try endeavour since i used antergos till it would not let me install or update anymore but i really loved there gnome version and would like to try replicate it if possible?

I am a noob coder noob tech junky but i can fiddle and would just like some advice is it possible?
When will we be able to install gnome as default with offline installer?

Thanks for the help in advance

Hi and welcome to the forum!

You can install the standard ISO, install Gnome and uninstall XFCE if wanted. Maybe this post can help you with that…

My goodness, how in the world do you remove XFCE? General system

Immediately after install, did not even update, I got into a console window (Ctrl Alt F2) and logged in as root. Did # pacman -Rnsd --nodeps xfce4 xfce4-goodies and totally nuked XFCE. reboot when lightdm came up, again got into a console window and # pacman -Syu Then I checked and make sure I had the intel-ucode and xf86-video-intel packages, which it did. Next # pacman -S gnome gnome-extra When it prompts for which packages to install DO NOT install 7 (gdm) I go through and pick abo…

I don’t know how tweaked the Gnome-Version of Antergos was, but with that you should get a standard Gnome-desktop.

hi @Morgs
i just had a quick shot at doing a gnome install on a spare ssd and the post that @devnul refers to works a treat, in fact it only took about 20 minutes to get gnome up and running from my new endeavouros iso that I built last night
Gnome is one of those desktops that I want to like but more often it frustrates the sh!te out of me 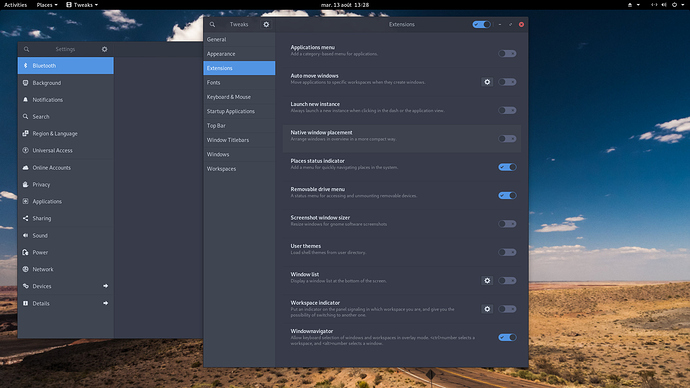 next iso will also be a offline installer. but somewhere near fall, there would be a online addon so we have to wait and test it, im sure gnome wil also be taken intoo account intoo the online options. but we have to wait. Those things takes time, im sure they tried a dev version but is a work to set it up what needed… we should wait

I would like to ask if it would be possible to build a gnome based offline installer for myself to use.

Yes, if you don’t want to install gnome after the offline install you can build your own iso.
You’ll need some learning curve though on how to build an iso, even if you use our files as source.
Depends on how much do you want to learn and how much time you’re willing to spend.

nothing listed for ‘dash to dock’??? how the hell do I configure it?
And my kalu isn’t appearing…

This is another case of Arch being Arch. For dash to dock or dash to panel you need to go straight to the source. Namely github, but never fear it is very easy, only two steps actually.

I start by making a new folder in my home directory named Temp cd into Temp, then as user enter

There should now be a folder created named dash-to-panel cd into this folder then enter:

Do a reboot, yes reboot not log-out log-in
Now dash to panel should show up in Gnome-tweaks. Enable it and configure it to your liking.
I prefer dash to panel because the panel on the bottom looks more conventional to people who use Cinnamon, Mate, Windows

or Deepin Gnome. Here’s how I see it, conventional panel on the bottom of the screen with frequently used apps, then click on Show Applications ( the start button in other DEs) and get your apps presented in a smart phone style.
Here is how I customize Gnome
Lauch Tweaks

For dash to dock, in ~/Temp enter

Reboot and use Gnome-tweaks to configure.

I’ve never tried installing kalu on Gnome, but if kalu is gtk based it might work.
Anyone know for sure?

Here is a screenshot of my Gnome desktop configured as described above.
Except I don’t use “Places” anymore (extreme lower left)

Dash to dock and dash to panel and all the other gnome extensions are also available in the AUR. (use yay)

You’re correct, but IMHO I try to use the AUR as little as possible. The AUR is always my last resort. Not knocking the AUR, it is a large part of why Arch is so popular, but occasionally it is the only way to get certain apps. Then I like it alot.

There’s no right or wrong in this case, I just gave another option, whether a user chooses for the AUR or not.

with firefox you can install easily an extention like dash, but also get automatic updated , vanilla gnome is always way stable

Heh. For me it’s the opposite. Pick order: Repos, AUR, Git, Flatpack.

I’ve never tried installing kalu on Gnome, but if kalu is gtk based it might work.
Anyone know for sure?

I think I got it to work with TopIconsPlus extension, but don’t recall for certain.

You also can install pamac. It helps me when ein dont what I am looking for exactly.

nothing listed for ‘dash to dock’??? how the hell do I configure it?
And my kalu isn’t appearing…
I’m back to xfce

for the time being…

“Legacy” Tray Icons, like the one Kalu is using to show up, do work under GNOME if you will start a GNOME-X-Org-Session and if you have TopIconsPlus installed and enabled.

That was the other caveat I was trying to remember. Thanks @joekamprad!

hello, I looked at gnome extensions on aur, they are at least two years old

Thanks for the info and yeah ill have a look at it my saddest day was when Antergos died it was the best vanilla, sexy slim gnome arch i have ever seen. Building my own iso is an option but will need to make time for that. Installing vanilla arch gnome is kinda like installing arch with gnome its bulky and kinda ugly. I just would have loved and option of choice at install. Maybe ill try the xfe desktop not used it since 10.04 xubuntu but ill give it a think.

Hi,
i think you read the articel from Bryan that there will be a netinstaller this fall.
https://endeavouros.com/net-installer-burning-questions/
Unfortunately it seems that it will only install the “bulky” vanilla Gnome, as all the needed extensions would be too much work.
I couldn’t remember a nearly vanilla arch with nice Gnome-desktop either. That said still every Arch-Install has half the packages of an Ubuntu-based install even if it’s a minimal-install.

The goal is a vanilla style if gnome, importandly not want to pimp the desktop with extentions that later on can get issues.

I fact you only need one extension Dash to Dock and get it from the correct place Gnome shell extensions.org not from the repros,

it is then installed in the correct location ~.local under extensions and can just be deleted if problems arise with right click delete. no harm done to the root file system