Good day to the community.

Just new to EndeavourOS and arch in general.

Fresh install and almost everything is working fine except conky. I installed conky and conky-manager and when i am trying to view a conky the appearance is like the above screenshot. 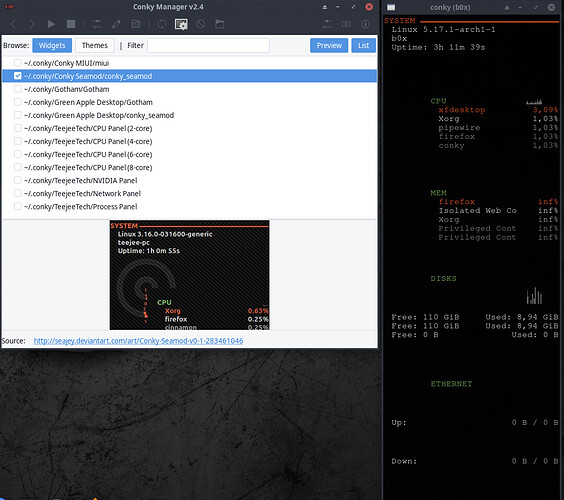 Can someone guide me what i need to fix/install ? Thank you.
Uploading: DeepinScreenshot_select-area_20220413013722.png…

welcom to the EOS community.

in which folder are your conky config files?

The configuration file can be located in one of the following paths (the first one found will be used):

If none of these files exist, conky will use the default built-in configuration, which you can print out with:

Did you install Conky on DeepinDE?

Not sure Deepin is going to work brilliantly anyway…

welcom to the EOS community.

For some weird reason im trying to install conky-lua-nv from AUR with yay and im getting this error:

Did you install Conky on DeepinDE?

Not sure Deepin is going to work brilliantly anyway…

No jonathon im on XFCE, i just used deeping-screenshot tool.

For some weird reason im trying to install conky-lua-nv

If you have installed conky why are you trying to install it again?

If you already have it in the system conky-lua-nv will not install and it will abort. Because conky-lua-nv is just conky with Lua and NVIDIA support.

When you try to preview a conky theme through conky manager the preview window appears like that. It’s not a bug to fix. You need to start conky by just entering conky in the terminal or making a .desktop file and using that to auto-launch conky at log on. You can use read how to do it here.

Also, make sure to make it run in the background as mentioned under the auto-launch part in the link I posted above. Once you get conky running you can use the manager to switch between themes and it should look like the below screenshot.

I did some settings to the config file and this is how my window appears now: 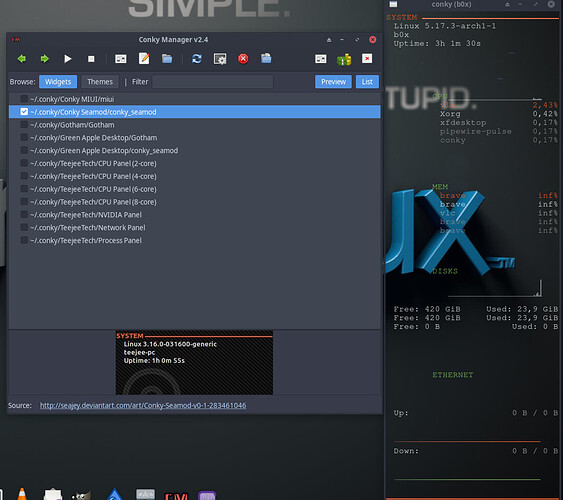 Im using conky-manager to manage conkys and not manual.

My path for conkys is: ~/.conky and not ~/.config/conky

I tried conky-manager years ago and just found it to complicate things without advantages - although YMMV. I suggest finding conkys you wish to try, and just using the conky -c path/to/conkyfile & construction to run things until you have it as wanted. I have a whole alternative to conky -manager built with yad for my stuff, but it isn’t ready for distribution(!) because it also uses and assumes conkywx is present…

If you have a conky that you want, and it won’t work - we have people here that can help (including me - look through Share your desktop thread for examples) - but make you have TIME to get things as you want them - conky can be a huge time sink!