I know that packages from the aur aren’t officially supported, but I’m hoping someone can help shed some light on an issue I’m having with Google Chrome. Flash player shows as version 0.0.0.0 and is unable to upgrade in EOS and vanilla Arch while it works in Manjaro. It works flawlessly in Chromium with the installation of Pepper flash, but Chromium has it’s own issues…

Any help is appreciated in advance, thanks!

Both adobe flash plugin and pepperflash should be installed from the extra repo. They are version 32.0.0.223.-1 I see it say’s version 0.0.0.0 in chrome://components

Thanks for the reply, but I already have both installed and flash works flawlessly in Chromium, but not Chrome. I’m unable to update the flash component in Endeavour and Arch, but I can in Manjaro and Kubuntu 19.04.

in aur comments that flash not present in google-chrome-stable

but if you take pepper-flash , and other modules from chrome you have basicly chrome, like widevine is needed for DRM the build in pdf reader, but depends what you need…

Ah, I thought that was marked as a bug not a notice, thanks for the clarification. I’ll check out widevine since Chrome is officially on my naughty list now

I have the same thing in Arch also. Firefox is no problem. Google is doing everything it can to block and do away with flash one of the reasons i use Firefox. Chrome does report that version 24 is installed on Arch. Getting it to work is another story. 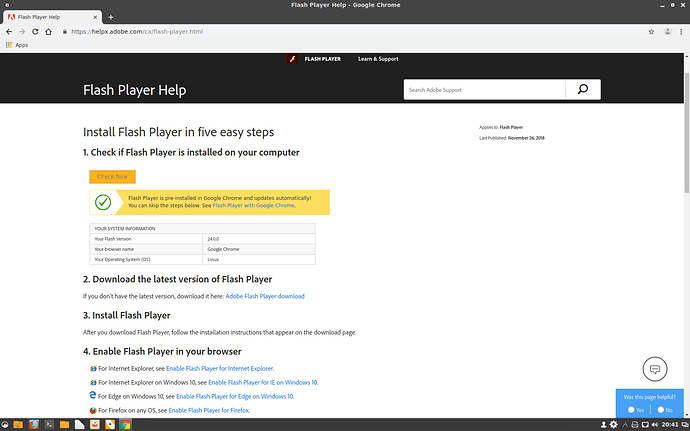