Did you reboot after the update?

Not before I posted the above. But have rebooted since, and Firefox is gone from my menu. However, Discover thinks it’s still installed in my system–it has the Remove button for Firefox. Too, when entered into Search, there’s a Run Firefox that returns the same error message above when clicked.

should not be empty

pacman -Qk should not show errors , but you can try reinstall firefox.

Can we see the output of pacman -Qs firefox

Sorry, I have been out on a job last week. Just back, and Firefox is still missing.

should not be empty

Can we see the output of pacman -Qs firefox

64/65 updates successful. only firefox did not update, and Discover reported this: 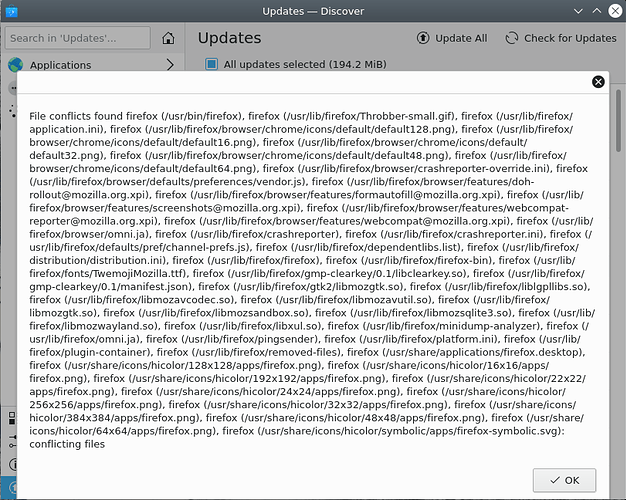 will just see if i can uninstall firefox 77.0-1 and then do the new firefox update.

Ok. Discover could not remove Firefox, and neither could sudo pacman -Rsn firefox. Only Pamac was able to.

Then (that’s why) I used Pamac to install Firefox 77.0.1-1, which successfully did so, after reporting a long list of conflict warnings about files already existing and replacing each one.

Firefox is now back. I guess it was a bug on Firefox 77.0-1, which neither Discover nor pacman could resolve, and only Pamac did.

But I guess I’ve discovered an instance here where Pamac is more powerful than Discover or pacman (through Konsole)? But that’s another topic.

is not neccesary powerful

pamac is built from the ground up to work with alpm(the backend of pacman). Discover is a general purpose tool so it can’t handle situations requiring manual intervention.

pacman is far more powerful than pamac but you need to know how to use it where pamac will try to automate some things for you.