It seems to work ok for basic ArchLinux ARM - so I started to play with EOS install and…EOS installer hangs for me just after servers speed ranking.

Code i’m using to start EOS install is like this:

Is there any way to debug this issue?
Or maybe i’m doing something wrong?

Hi and welcome to EnOS’ community @warpme!
And good luck with resolving your issue!

Also please have a look at the install instructions at: 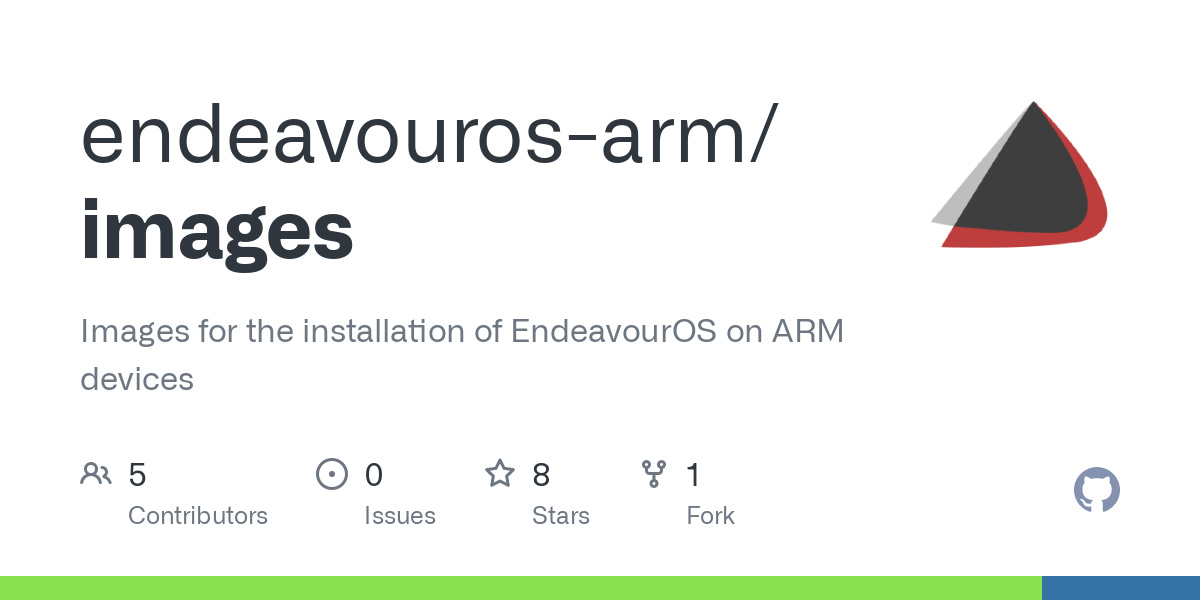 Hi and welcome to

forums. Best person to answer would be @dalto.

Thanks for trying out

As @pebcak says our latest install method is given here:

The script you are using is our old script for devices we don’t directly support. For using that script, you have to have archlinux arm installed first then run the script in the repo.

I’ve tried this script after looking at your post and I can verify that it is working on a chroot. I’ve not verified it to a a separate storage device.

EOS installer hangs for me just after servers speed ranking.

Is there is an error in servers speed ranking, then the issue might be with the mirrors. Is the script hanging after the mirrors are being ranked or before?

It would be great we can see the terminal output of the screen when it hangs. If text output can’t be done, a screenshot would suffice.

Good.
This means my issue is result of different system state (installed pkgs) of my system vs. yours.
Im installing on pure https://archlinuxarm.org/platforms/armv8/generic on rpi4
I see installer skips installing libnewt on rpi4 devices.
This results with fail when user is using https://archlinuxarm.org/platforms/armv8/generic on rpi4 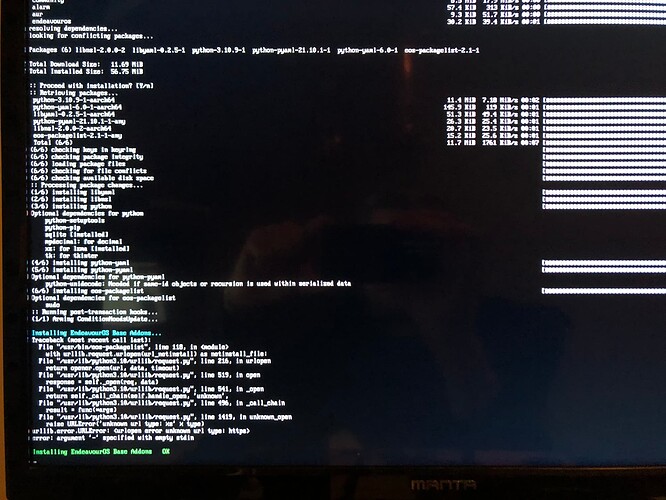 Can you provide the entire log in a text bin?

I think the issue now is the endeavouros core packages like eos-packagelist are not installed.
You can see that the mirrorlist wasn’t downloaded properly. I think this is again a mirror issue and or github issue.

mirrorlist and keyring, we download it in our script from github and manually install it. That step is in the beginning of the script. If it fails, everything else will.

Im again a bit further with this: after multiple reruns of installer script i got state when system boots with black screen and blinking cursor.

Logging as root and examining logs shows me xorg server failed to start due:

This looks to me like mesa is built against icu71 while system already has icu72.
(the same issue i see for gtk-pixbuf2, gtk-query-immodules, etc)

btw: i have another issue with failing gnome-shell. What is most preferable way reporting such issue?
(GitHub issue, here, another forum category, etc)

Did you try to install the rpi4 image instead of the generic arch?

I think these issues will be resolved soon if you report it there. I face these issues infrequently, but they generally get resolved.

@Pudge could you look into the missing dependencies in the install script? Nice to see that it’s working with minimal maintenance from our side

Oh no - as this is not what i want to achieve.

target: user downloads image, burns on SD card, inserts into SBC, updates from Internet and installs EOS. All should be as easy as possible.

So far I got it working (with some fixes for archlinux arm image + oes install script) for all my supported sbc/tvboxes (https://github.com/warpme/minimyth2#current-status).

If you can give us a list of packages which needs to be installed (which is currently missing from the install script and causing the script to not run) it would be really great. I’ll add them to the script.

Oh no - as this is not what i want to achieve.

Yes, that’s why I was testing the script. This was the old method and currently the supported method for devices we don’t officially support. Thanks for looking at our work. Even though this script is minimally maintained, I was pleasantly surprised to see that it still works. I think we can make it better with your input.

If you can give us a list of packages which needs to be installed (which is currently missing from the install script and causing the script to not run) it would be really great. I’ll add them to the script.

Sure.
I think script needs some love in 3 areas:

First off, for the RPi 4 model B we don’t use the generic AArch64 Installation as it installs the
linux-aarch64
kernel.

We use the
linux-rpi
kernel. Which is the “RPi Foundation patched Linux kernel and modules”.

We tried the generic linux-aarch64 kernel and found that it did not do what we wanted it to do.

If using the generic linux-aarch64 kernel is a requirement for miniarch then you will need to rework your script to accommodate your needs. 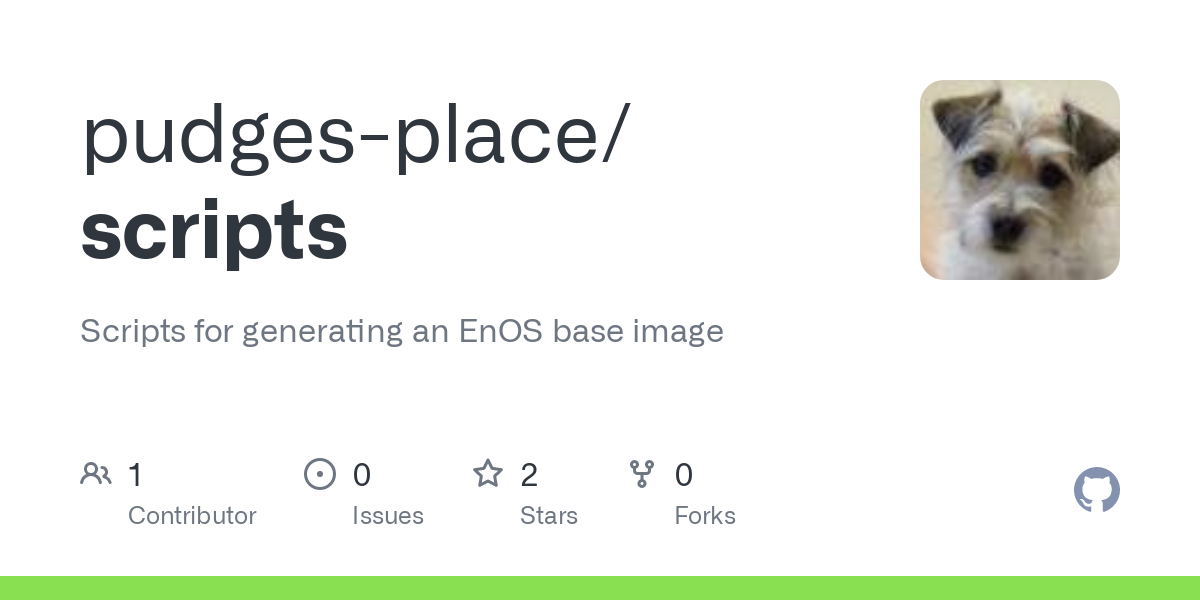 GitHub - pudges-place/scripts: Scripts for generating an EnOS base image

Scripts for generating an EnOS base image. Contribute to pudges-place/scripts development by creating an account on GitHub.

Perhaps you can check these out and maybe find something useful.

kernel. Which is the “RPi Foundation patched Linux kernel and modules”.

My motivation (with my project) is to offer choice: users can go with dedicated kernel per group of devices (example is rpi) or go with universal kernel (this is what i want to offer).

In ideal world - if api/abi of dedicated kernel conforms with mainline - we should be ok.
But even with that - rpi is not a case (e.g. h264 stateful video decoder offered by rpi kernel works only with rpi private ffpmeg. the same with hevc state-less).

You may say - what the problem?

Model i’m developing solves this issue (as we have single mainline kernel).
It is not free: mainline will almost always offer less full hw support compared to vendor kenrel.

Q is where is break even point to move away form vendor toward mainline?
Imho probably best criteria is devel. effort: if lower maintenance/devel but less hw support by unified kernel outweighs extra time/effort of keeping multiple ver. of sw components with vendor kernels for better hw support - we should go with mainline. I’m already on this route.
(imho corner cases where rpi covers and mainline not is all the time deceasing while rpi kernel incompatibilities are still pains and growing: hevc decoder is example)