EndeavourOS plasma frozen hard , what can i do

hii, my laptop whixh runs endea plasma freeze suddenly when i open a new youtune tab in firefox. all just freeze, mouse and all.

Pressed ctrl+alt+F2… after a few minutes, it reaches tty2:

such serious freezing of os, what my options are available?

if you choose to login into tty2, what can i do fr inside to unfreeze it?

lets say hard shutdown is not an option …

ps: write in with smartphone now.

If you know which software is causing the freeze, you can do killall <app-name> to force kill all instances of that particular application.
Eg:

you could also try htop to close the application.

Imo, None of these two methods will save the data of your application before closing. You will face data loss for the application you kill. If you feel its okay, then go forward, else wait for someone else to give their suggestions.

i cant even call out terminal app. frozen

i think can only run htop thru tty

Yes I meant the tty

haha, by the time i log in to tty, firefox was auto closed by something…so lost the chace to learn practically.

However something weird happened to youtube site:
pls don’t mention the amount of tabs i opened… my bad habbit.
now, all my youtube tabs become this…
when i type in www.youtube.com… it just appears this monkey… something changed when it crashes. 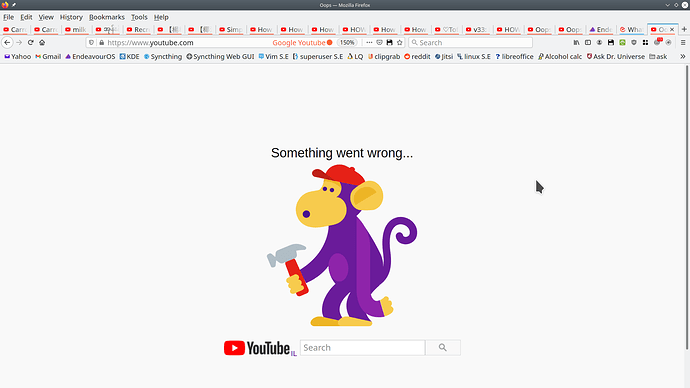 However i can still open the same youtube thru a 3rd parti website service.
maybe some setting in firefox triggered tells firefox to disable youtube site ? because it causes crash ? 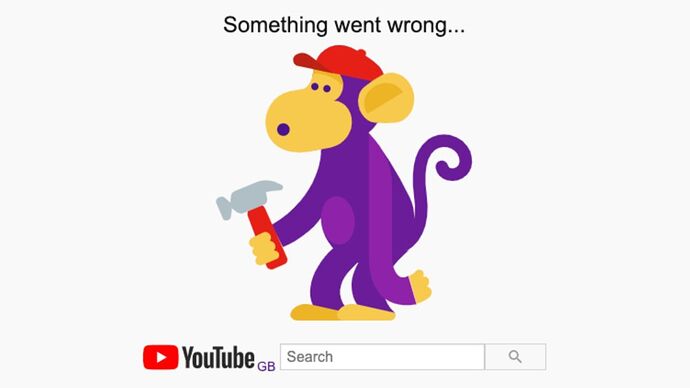 YouTube down: users are getting 'Something went wrong' error messages

Is YouTube down? Here's what's going on with the December 2020 outage

Maybe an outage? This link I put here was posted 10 minutes back.

Edit:
Downdetecter also says YouTube is inaccessible for some

Real-time overview of problems with Youtube. Can't log in or watch videos? We'll tell you what is going on.

This kind of stuff is what i dislike… bcos i have no learn anything from the issue. wasted. 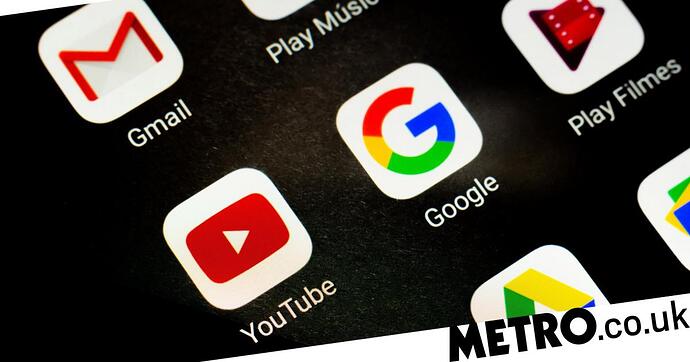 YouTube and Google services down for millions of users

All of Google's services are currently experiencing a massive outage

Gmail, YouTube, and Other Google Services Currently Down in Multiple...

Gmail, YouTube and Google Docs are all experiencing severe outages, with reports of problems accessing the services across much of Europe, the U.S.,...

Highly depends on the server you’re connecting to. The domain is “youtube.something”, but there are many servers around the world. The people at YouTube/Google may have temporarily set up a redirect so that all queries coming at an affected server is rerouted to some server is working. Probably this is the reason why you can (now) access YouTube.

Edit:
Reading reports on the websites, it seems like the problem is related to the authentication service. So my reasoning above may not be 100% compatible with the current situation.

Well, that does it! i m gonna sue google for causing my laptop to freeze!!! sue them for a lot of money!|!!
Since i got proof now!

I don’t think YouTube being down for a while had anything to do with your computer freezing, but it’s why you got the “something went wrong” monkey.

I also got it for a while. I do not like monkeys!

I suspect your computer is freezing due to the tremendous amount of tabs that you have pinned. If that is your normal way of starting firefox i am not surprised your system is freezing. If you want to test it teboot your pc and log in without launching firefox. Open a terminal and launch htop. Then launch firefox and see how much cpu and ram is being used.

Also return inxi -Fxxxza --no-host
From a terminal and post the output here.

@Elloquin I remained silent just because of this

pls don’t mention the amount of tabs i opened… my bad habbit.

I remained silent just because of this

Me too. But we were all thinking it…

I don’t think YouTube being down for a while had anything to do with your computer freezing,

no ? how come they coincide so precisely ?

ur pc and log in without launching firefox. Open a terminal and launch htop. Then launch firefox and see how much cpu and ram is being used.

Also return inxi -Fxxxza --no-host
From a terminal and post the output here.

Nope! i won’t want to do that

But i have opened so many tabs for whole several weeks of usage… nothing have happened… Just until just now… youtube service downed… and my computer freezed… so perfect!!! can’t help it but thinking there is corelationship

Anyway, i am gonna scramble out of here… before too many flood of “rain” poured in… lol
Cheer!

OK just two things and then you can continue on your journey of self fullfillment.
One, you really need to get a grasp on how to properly use the forums quote function.
Two,

Just for information purposes their is either A. a relationship. or B. a correlation. Could be both but that doesn’t mean they become the same word

Thread has been marked solved. Would you like me to close it now?

you really need to get a grasp on how to properly use the forums quote function.

before that… what do you meant by "properly use of quote function ? Hav i being use wrongly ?

Oh ya… my poor english… i tend to “create” new vocabulary …