EndeavorOS_Cassini_22_12.iso does not start aborts with an error message.

I had a problem using ventoy and selecting “normal boot” ( don’t remember the error msgs). After I tried “grub boot” and it booted normally. I will try again later, take some pics of the screen and post here.

I would suggest creating a new live usb using etcher on Windows or Linux. Ventoy doesn’t always work. Could be the reason?

I took a picture of the boot screen showing the messages. 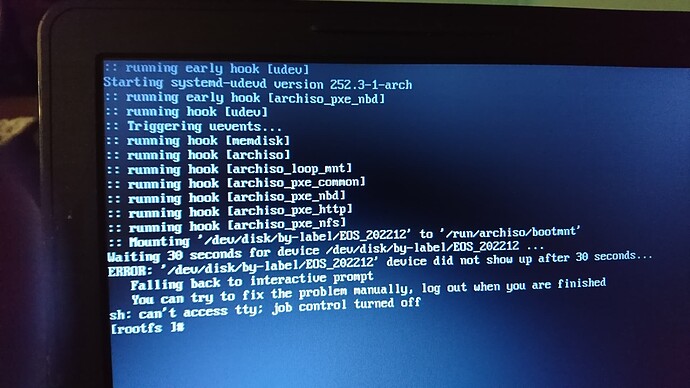 update ventoy it worked for me.

I had a problem using ventoy and selecting “normal boot”

I get this error every time I try to install Arch or EOS from Ventoy.

The solution here is to create a separate USB and dedicate it to just that ISO.

So some reason Arch does not play well with Ventoy. The same also for KDE Neon.

Always write a separate ISO to install Arch and EOS.

I can see similar issue…
ventoy is sometimes working and after update of ventoy or ISO it is not working at all…
But writing the file image directly to the stick is working 99,999% of times no matter using DD or cat or other direct write options.