Hello guys, I’ve been using Linux for quite awhile with KDE as my DE of choice. Every so often, KDE decides to be annoying and quit working properly. When this happened on GNOME, I know I could use ALT+F2, then R. KDE had no such option and that only worked on x11 anyway. To solve this, I made a .desktop file to restart it quickly without launching the terminal.

To use this, open a new file in Kate, paste the above text, then save it to your desktop as AnyFileNameYouWant.desktop

I just use alt+space to popup krunner, it hasn’t failed me later.
And just restart plasmashell. Obviously it happens often enough I can remember the steps (lol).

Haha. The main problems I have is the weather widget failing to do anything useful or the clock freezing. These problems usually take a week or longer of uptime to show themselves thankfully. I also have Krunner in my menu bar these days so I don’t even need the shortcut.

do kwin_x11 --replace also not work , just a question

wayland is kwin_wayland but idk… if kde hangt i would first look in the services and disable some services like baloo , or other indexer services… and which opengl you use can be a point… 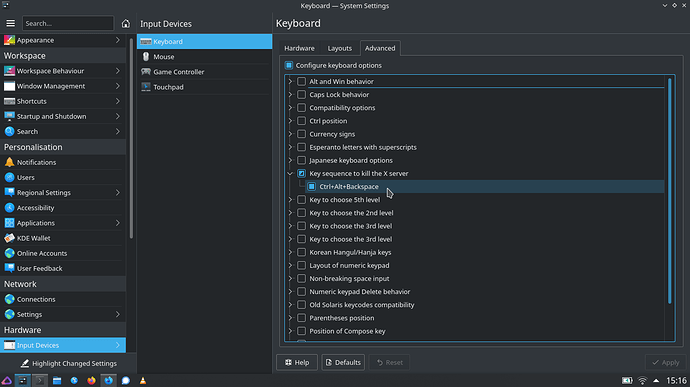 Also, this shouldn’t be prefixed with [Solution] like this, there’s a Solved button for a reason - and a wiki for an even better reason.

[Tip] Logout of Plasma Session from the Terminal Desktop Environments

By changing the numbers in the command you can do other log-out-related stuff. As mentioned above qdbus org.kde.ksmserver /KSMServer logout 1 0 1 will display the logout menu, with the “Log Out” button selected. qdbus org.kde.ksmserver /KSMServer logout 1 1 1 will do the same, but with the “Restart” button selected. Changing it to 0 1 1 will restart your computer without prompting you. 0 2 1 will shut it down. I’ll leave it to you to figure out what the other combinations do

Relevant for Linux in general:

The Linux kernel authors have provided a very nice feature of issuing low-level commands to the kernel directly, regardless of the state the system is in. This is called the “Magic SysRq Key”, because these commands are issued by pressing the SysRq key on the keyboard (if you can’t find it, typically, it shares the same physical key as the Print Screen key, but on some laptops it can be elsewhere). A common use is to reboot when the computer freezes and becomes unresponsive due to some software…

I already knew about and enabled REISUB but didn’t know about the qdbus stuff. Thanks!