You probably don’t want to … i hear it’s difficult to install.

yep , dont want. just one time i installed arch linux “traditional” installation. was first time, in 30 minutes after looking on youtube. nothing is hard if you really want to do. but i dont know what is so diferent gentoo from arch? is independent like arch and nothing else. if is hard that not mean good…and btw , eos is on 47 gentoo on 49

You probably don’t want to … i hear it’s difficult to install.

I understand that Gentoo is the most sophisticated and secure GNU/Linux distribution. It is the one distro which evidently is the favorite of "hackers’ and other such people. (The person who ran Kickass torrents used it and would have never been “caught” had he not been stupid and rented servers in the United States and Canada! I guess you can be brilliant and stupid at the same time!)

I also understand that, not only is Gentoo difficult to install, it takes “forever” to do so and “forever” to update.

There is an alternative, much as EndeavourOS is an alternative to Arch: that is CalculateLinux. That one is very easy to install and, though updating is much more time-consuming than with most other distros, it is still easy to update. It is also a “rolling-release.”

I tried it for a while and I liked it. But I had to stop using it. That was for two reasons: first, the distro is Russian in origin and, for the most part, its forum is written in Russian, which I do not read nor understand and, second (and most important), there are several programs that I use which are not in the repository and I could find no way to install them. That was the deal-breaker.

I apologize for this long, basically off-topic, post but I thought that the information might be of interest to some.

It is totally true, I have seen it in several forums. There people with a lot of capacity that Gentoo used, no longer do it, simply because they got tired of compiling and doing everything by hand, to the old school, that’s why when trying Arch, they stay and are very comfortable.

It is true it takes hours yes, now well; Like slackware, Gentoo and all the classic distros of Linux, with the appropriate documentation they can be installed and they are solid as a rock and you learn an enormity of things, which usually does not happen with other distros.-

Just checked today on Distrowatch. When you use the last 7 days filter - EndeavourOS is 7th! That was a pleasant suprise! 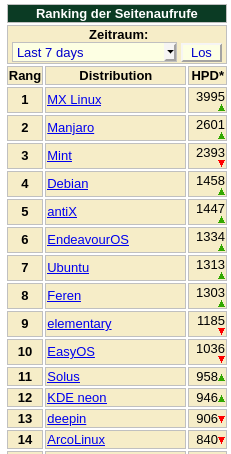 Well done guys. You have been working hard & have managed to work wonders in such little time. I do feel proud of you.

To be fair, it is a good distro with a good focus on their community.