Just a video, interested to see when it makes it into the repos:

It’s sad to se a distro going downhill like this, as I loved the DE as it was.

This is just plain ugly and doesn’t look like Deepin any longer. The Dock is gone in favour of a grotesquely thick thing at the bottom. The ikons är childish, the settings menu-pop out from the right is gone.

It’s look, and soul is gone.

I agree, especially with how thick the panel is, and “fashion mode” takes up half the screen. I was also disappointed that the settings are still pretty much useless, you can’t adjust anything really

It’s still the same dock? If I switch my current dock from “Fashion Mode” to “Efficient Mode” it looks exactly like the picture. You can change the icons.

Lets not call time of death when the patient hasn’t even arrived at the hospital yet.

Looks very similar to the new UKUI in my opinion now.

There’s a very good reason for that, my friend. Deepin is the community version of UKUI.

the settings menu-pop out from the right is gone.

It was very usefull, fast to setup and accessible, not a good idea to replace it by windows !
The install is impressive, the worldmap beautifull…

I noticed that the choice for server mirrors is not there anymore ! but it’s Beta…

There’s a very good reason for that, my friend. Deepin is the community version of UKUI.

It is? I thought UKUI was from the Ubuntu Kylin project?

@FLVAL
I have also tried Deepin 20 Beta and it but it seems it makes a difference which ISO you get as i tried some and it was horrible but i just downloaded another and it installed really fast and works like a charm. It will be really good on Arch for sure. I know some were complaining about the dock being so big but i just adjusted it to make it smaller and it’s great.

hi @ricklinux, I used directly the mirror ftp to download it…choose one from Canada, you would find a fast university which is sharing it

The Barmenu could be setup on differents way and mode…The install is very useful and geoip worldmap fantastic…maybe the best installer on Linux, they master UI design. I could install on my father computer who used the old Deepin 15.7 not possible to update it cause the Kernel version 4.15 and 2200G AMD GPU, now it’s working like a charm on first step with Debian 10 and Kernel 5.3. It’s a Beta but already advanced.

If you guys add Deepin 20 to Endeavour, would it be possible to add a few settings or is it difficult to do?

One would be a panel settings option to adjust the size of the panel and icons, and any other common settings that people might request

Another would be to add an acceleration setting to the touchpad. The cursor speed is not adaptive at all, and it’s annoying to use

If you guys add Deepin 20 to Endeavour, would it be possible to add a few settings or is it difficult to do?

One would be a panel settings option to adjust the size of the panel and icons, and any other common settings that people might request

On my test this afternoon, you could simply grow the panel and icons in the same time if you stretch it up. Try it in changing mode on right click on baremenu.

Another would be to add an acceleration setting to the touchpad. The cursor speed is not adaptive at all, and it’s annoying to use

Then about touchpad, remember it’s a Beta release for now, would be good to report this bug directly to Deepin to get it ready on V20 release…and futur DE

The old Deepin also had one setting for speed and nothing else, and it wasn’t adaptive

Which Deepin were you testing where you could stretch the panel? The official beta version from the Deepin distro?

I was able to just drag the panel to make it smaller. All the icons just adjusted as i dragged it. Are you referring to the bottom dock panel?

I’m running it on v-box no issues. 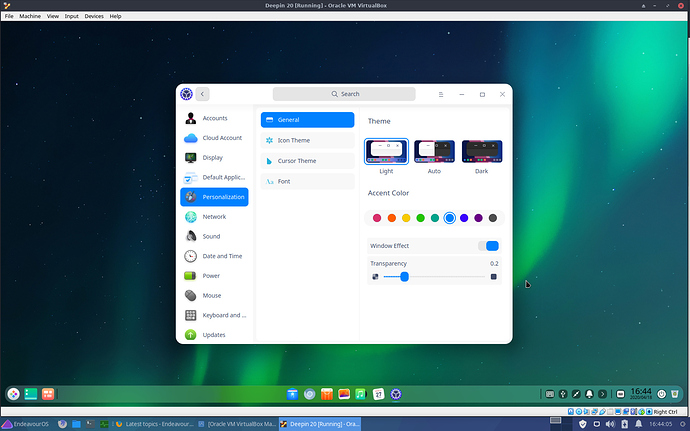 I took the one from Austria depending where you are…

To have an idea of what it would be on futur DE, you could test on Vbox, works well.

How does one install a version of Firefox that isn’t from the industrial revolution on the official Deepin?

Chromium as default…on the few latest Firefox version you could setup language throw it directly, so it gives some problems to modify language on a Chinese default Firefox when you install it ! Before you installed the lang Firefox package and it was ok…

But again, it’s a Beta release !

Have you checked for snaps or flatpaks?