I have too much space between the lines in conky.

Can somebody help to make it better

Thank you very much for your help

In a basic conky such as this, AFAIK, things like interline spacing are set by the font you choose. Whether it is worth finding a ‘tighter’ font with similar looks… IDK. You may NOT know, however, that fonts can be specified with their sizes in increments - one conky I used to run used a font with 8.2, 8.8 and 9.2 sizes for particular placements (as well as some full sizes elsewhere).

Another alternative, but much more ‘complicated’ is to use a lua based library to render text instead. The conkywx library, as well as many (!) widgets, includes a textformat statements that places and aligns entire blocks of text as desired. Here is an example using conkywx - ALL the text is placed and rendered (colours included as well as leading) with a few textformat statements. See a couple of them below… 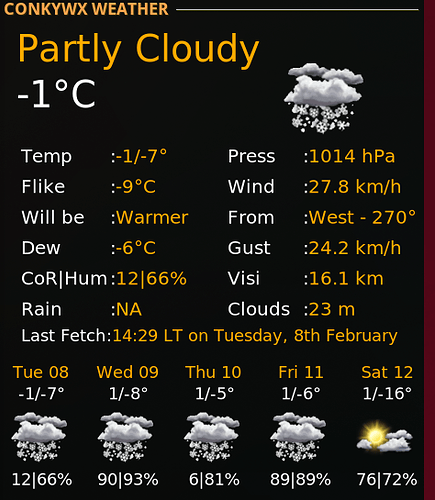 You can see that commas and semicolons set lines and tabs, h for height and w for width, and so on. Doesn’t take long to learn the basics though!

There may be other ways of handling it - but those are the ones I generally use.

Here is some code it helps to post it.

This is what it generates. 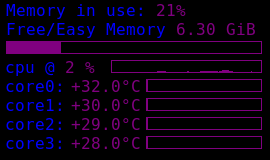 I don’t think the bars affect the line spacing - but if they do I expect it would be their height setting that does, not the length. I hope the OP has tried fractional font sizing - it might do the trick (especially as the ‘default font’).

Eventually, you can make conky do whatever you want - if not always directly! For instance, you can call a $voffset with a negative pixel count to tighten things up…every line! A bit work intensive, but possible…

I know OP is artistic, so positioning is bound to be important!

The question is not clear. I read it as Op wanting a more compact conky overall with fewer lines? Thus shorten the bars, place code on the same line …

I have too much space between the lines in conky.

How much closer can the lines be and be readable??? I needed another translation, or read between the lines.

Sorry for the late answer. Thank you for your help.

I have found a solution for me, the font i have doesn´t fit in my conky. Now i have another one and everything is good.

That’s exactly what @freebird54 told you, so you should mark his reply as the solution, not your own.

Oh no, i don´t have read this carefully. I make it right now. Thank you, @Kresimir.

Just adding information here: If you want to reduce line spacing, insert a ${voffset - some number} any number between 1 to whatever. The number is the number of pixels up or down you want to change. If you wanted to reduce spacing by 5 pixels, add this code everyplace it is needed: ${voffset -5} (voffset is vertical offset up or down–offset is right or left of center).

A code example from 1 of my conkys: