I have tried to change the terminal used both in the i3 config as well as in the eos-script. However, I have not been able to make it change. I am trying to change it to tmux.

so what exactly have you done to change the default terminal?

is set in i3 config, only needs to be changed to your terminal executable.

i3 or sway is about as basic and fool-proof at changing configuration (like this) as anything in the world. The text config file simply needs to be edited with a valid executable installed and in your path (or an absolute path of course)…the config reloaded and voila, magic happens!

I guess it is my bad then. Do I change it everywhere for xfce-terminal -e tmux?

try it… some tip for such task:
use xed editor and replace option: 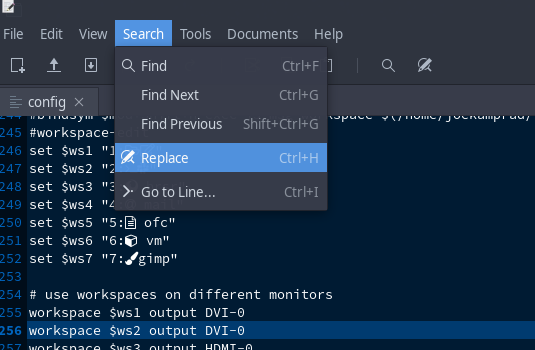 Now now…someone running a tiling manage should use vi or maybe nano (hee hee, old fashioned am I).

yes i do use i3 but the reason is that I can simply choose what ever I want and integrate it into my setup as I like… and I do like GUI editors, in the same as some cli tools p.e. i do love nano but vi? no way

In addition for this case you should create a patch