Hi guys!
I’m a new Endeavour user (and an old archlinux user. very very old. at least 10 years ago).
now, I have an old laptop to revitalize (core2 duo, 4gb ram) and I think that an arch-based system should be the best way.
I’d like to use Pantheon DE, beginning from a online installation of a base-system (no DE installing)

What should I do after the installation of base system?

thank you so much

PS: please forgive my bad English, I am Italian

The best source I can think of for information (other than a Pantheon user if present!) is
https://wiki.archlinux.org/index.php/Pantheon
Usually the information is comprehensive, if not always easily comprehended…

Edit: Don’t worry about your English - it certainly appears FAR superior to my Italian!

It should be easy, but I haven’t tried myself, as I’m quite content using plasma. Pantheon is one of the good looking DE’s though, imho. 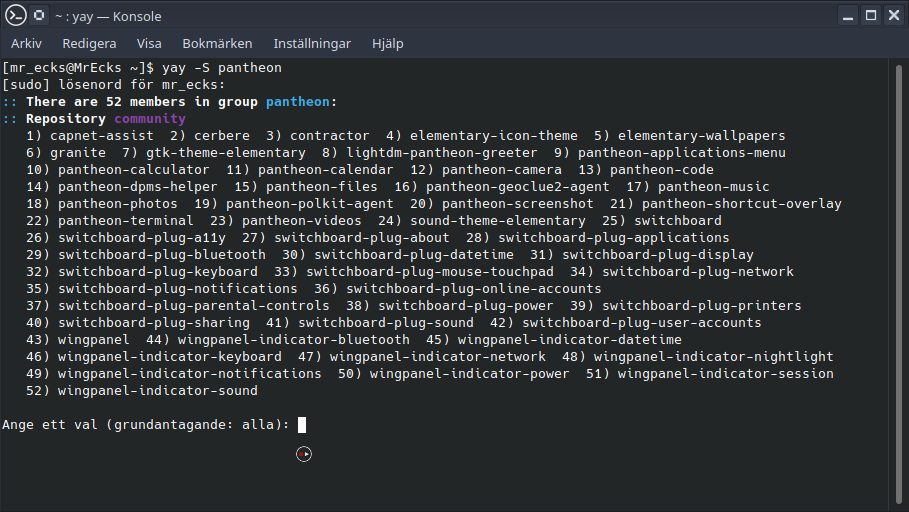 Then you can pic and chose, or just install the whole Pantheon desktop. In the latter case just hit enter (and probably keep on doing that).

Have fun, and welcome to the forum!

oh, wow.
awesome.
yay -S pantheon should be install all dependencies need to work fine I guess. such xorg, etc?

You should be aware that Pantheon is somewhat difficult to keep working on Arch/EOS. They target Ubuntu LTS and are generally not super worried about anyone else using Pantheon outside of ElementaryOS so if you decide to use Pantheon you should expect breakages as things roll forward.

This is why not many Arch-based distros offer a Pantheon experience. Or at least, they usually don’t do so for very long.

pantheon-desktop-git is a meta package so it probably wouldn’t need to be updated very often.

Most/all of the packages it depends on are also *-git packages. Those packages simply pull the latest source from the git repos and build them. They only need to be updated if the build methodology changes or specific patches need to be applied.

I didn’t know that. I checked the elementary github repository and things seem to be updated quite frequently. Why wouldn’t it work well with Arch-based distros then?

I checked the elementary github repository and things seem to be updated quite frequently.

Being under active development and targeting the latest versions of libraries aren’t the same thing. Pantheon isn’t an independently developed DE. It is built specifically for ElementaryOS which is based on Ubuntu LTS. Ubuntu LTS is only released once every 2 years. The times when it works well are usually when they are targeting a new Ubuntu LTS release because the library versions on Arch/Ubuntu aren’t that far apart. But 18 months later there is a big gap.

To be clear, I am not recommending people don’t try it. I just don’t recommend relying on it as your only DE/WM. I have tried to get it working quite a few times. My experience is sometimes it works well, other times not so well.

There is also a pantheon meta git

Also there is a user repo with pantheon on unoffifial repo but as those repo is likely soon or later to break. I think personal things like xfce you can theme like pantheon with the wing menu or gnome can be elegant to on some point but would not stil be the same

And cinnamon with two panel , and second panel can be configuree as a dock. Because standard cinnamon has windowish task icons