Are there any (functional) Differences between Installation of Packages in Calamares versus CLI later on?

Actually there are three different options available to install packages in EOS.

1. By selecting them in Calamares-installer: 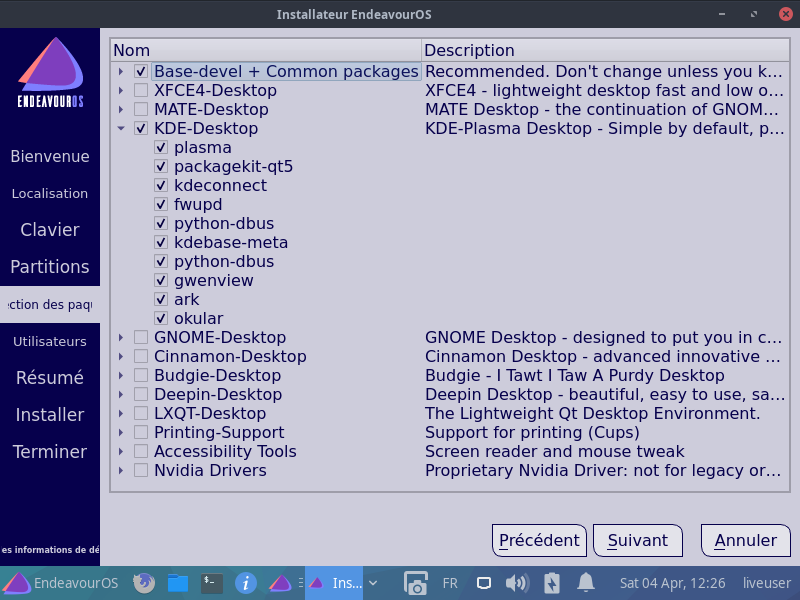 2. By installing them via CLI-command after finishing base system installation:

3. By using Discover to install them via GUI after finishing base system installation

(I guess, no screenshot required here

So my questions especially about the category Base-devel + Common packages group are:

If the latter is true, I couldn’t install them via CLI because I wouldn’t know what else Calamares has installed to get the package working. Therefore better to ask here.

Furthermore, some packages seem to be mandatory to install them during initial installation already. See here for example the package ethtool:

It is not for network scanning, it is for managing network interfaces. I would install it. If you need it later, your network might be broken and it may be difficult to install at that point.

in the online part of calamares , the desktops are installed in Groups. if it was installed in in Meta packages it get also harder to remove some packages if you dont want it.

all things are configured as vanilla. you can make your desktop of your own also.

if you use online installer your system is already up2date do pacman -S xxxx is fine but general, de groups packages in endeavouros is basicly al what you need to run a desktop.

calamares is just a installer btw ; if you do pacman -S plasma , it installs all from ‘group’ plasma… groups are basicly different then packages it self, packages self are mostly : package+depency thats needed… but groups are , packages in a group+ depencys what needed.

Thank you for your answer!

if you do pacman -S plasma , it installs all from ‘group’ plasma… groups are basicly different then packages it self

Okay, the Desktop Environment group is a bad example with all its meta packages, I should precise my question more about the Base-devel + Common packages group.

In the end there is no difference as installer is also using pacman to install the packages selected. But installing packages on installed system is not possible with calamares, it is only the initial system installer (also using the tools from archlinux to install needed packages)

To be clear, ethtool is useful and I would recommend it but I don’t see it as a required component of a base install. You don’t need it to connect to the network. It is useful for when specific situations come up that require changing adapter settings such as when duplex auto-detection isn’t working.