Has anyone used the AppImage tool? I wonder if it is that easy? Maybe Kid3?

Yes, make me an AppImage of Kid3! Maybe one on Lollypop too!

AppImage is really good. I run them when I can. Works on most Linux distro.

Does it work? You tried it?

I tested the AppImage tool a while ago. Downloaded it as AppImage but did not get it to work

Have not tried since then.

Has anyone tried , used , compared Kid3 to Easytag
Curious

I’m afraid, despite my decision to use kid3-qt, that I don’t really know. I tried Easytag - and it didn’t immediately do the operation I wished at that moment (and kid3 did) and I didn’t try any further

So Easytag may be more capable, or better in other ways, and I would not know it! It just wasn’t as instantly accessible at that moment in time (to me).

I have tested both. Kid3 is much better. Easier, faster and you have control over the entire metadata. Nothing is hidden.

I have tagged around 10k songs with Kid3 without a single hassle. I run Kid3 on Linux and Windows. Also available for macOS. Which I think is good. You do not have to lock yourself into an OS. Just choose what you want!

,
I only use Linux have not used Win except for few weeks a decade or more ago at least .
I might just go and get that Kids3 app after finished here looks good,
looks to have the tags youd expect , the layout seems more open ,
give it workout this week got a BBig folder full of tunes for it
Armin van Buuren songs over 500 tunes yep 500

You will not have any problems! I loaded around 40k songs in Kid3. 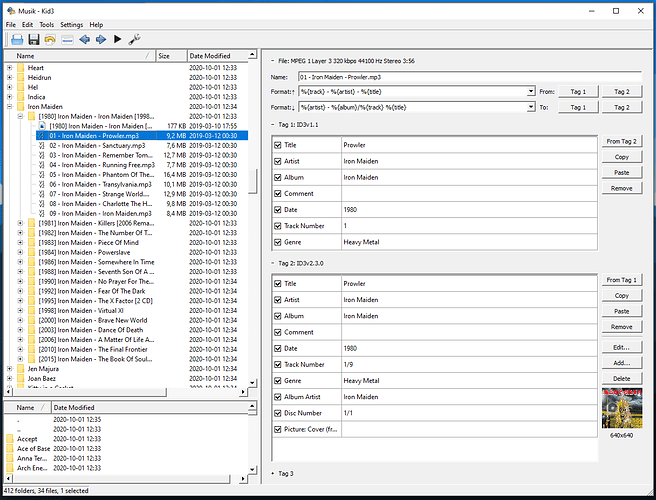 Works as fast as with an album.

I think the artist I have the most songs on is Grave Digger. 19 albums and around 250 files.

I have not searched so maybe there is one already?

I had a look last night not a proper use of it , hopefully this week ,
today I’ve been getting into Gimping and will show tonight soon

One thing did notice is have to use ctrl+c and ctrl+v ( makes no real time difference )
in Easytag just highlight and drag and drop ( I have manytimes easily not highlight enough or too much ),
Kid3 has a much clearer and cleaner look makes easier to navigate (faster) also the album art is on the same page (better) , cannot forget to do artworx then in easytag it in a different tab easily overlooked when tired or rushed ,
small differences that make big differences when doing any amount of files ,
I appreciate you sharing about Kid3 never heard of it before,
Thank you @anon9173994

Another thing you might (or might not!) find useful about kid3 - it has commandline access to things if you want to script it instead - or just batch a preliminary ‘take’ on a whole whack of files. (I had a bunch from CD, and batch tagged from filenames where needed).

Pretty good at batching in GUI too, though

Only know from you about Kid3 , batch tagging yeah that’s good ,Looks as though found a good app ,
sorry easytag It’s not me it’s you

looking forward tomorrow might even start later tonight ,
Thanks @freebird54 see this idle chit chat is a community learning and moving forward
I appreciate this Forum , Good stuff .

It’s fun to see others spend some time on file tagging. Thought I was alone with it today. Everyone is running Spotify or similar stuff today. Not many people know how to tag.

I am very pedantic with my files and want them in a special way. Everything from tagging to folder structure. Filenames and so on.

This is what my folder structure and file name look like. On all my music files:

Takes some time, but is worth it! Music is important and requires love and work!

It does not stop with music files. Movie files and TV series are also important! 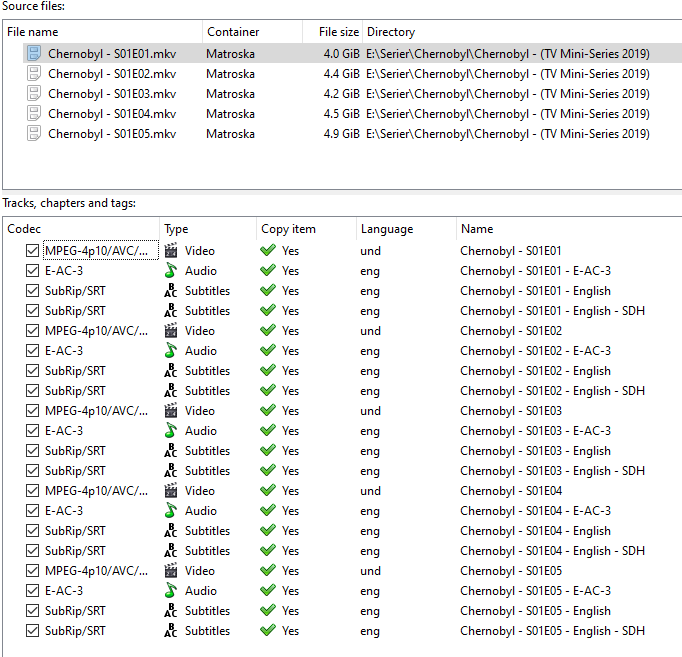 I use MKVToolNix for movies and series if they are in mkv. Available as AppImage. A really good program too.

@anon9173994 100% agree
If you care about the music collection you care about tagging files theres nothing wrong with having music or anything else in a structured organize system ,

Hmmm - I see some resemblances here. No doubt yours is more completely this way, though! Mine is a jumble of mp3s, oggs and flacs (some with .cue files) - but the idea is the same… 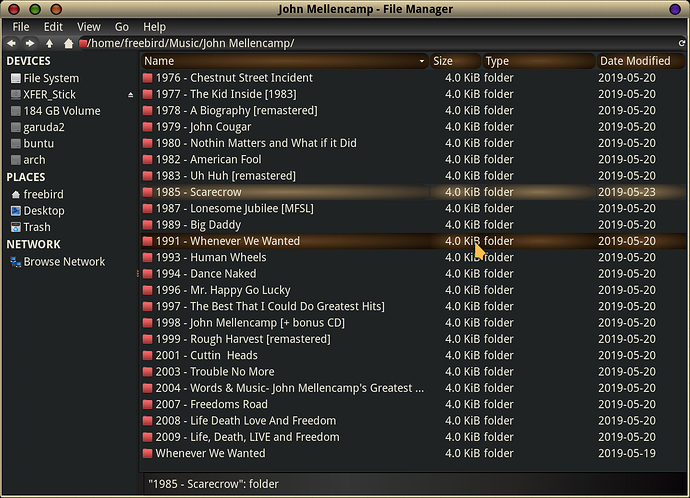 In my case, all cover art is called ‘folder.jpg’ - so it can be picked up and displayed by conky when audacious is playing it…

Got to admit, though, that the movies get less attention!