Alternative for Xeyes that works with Wayland?

you always make me smile .

You have not heard of xeyes

Im a single monitor not far from me or too high a resolution for me to pick things out kinda person. Though i guess for some its useful

The more you know

is wayland on KDE even usable yet? I heard its still rough around the edges vs gnome+mutter or something like i3+sway

Create an fully transparent window over ALL available monitors, then pick the mouse direction info from that window. Trivial! Of course, while you’re there you can keylog too…

is wayland on KDE even usable yet?

Depends on what you mean by usable. It works. It’s not without flaw.

I have been trying the Wayland on the KDE desktop off and on for about a year or two. So far my experience has kept me switching back to X11. Wayland generally starts and runs but I would have small annoying errors that would crop up from time to time. As an example, as soon as I had logged in, if I opened an application it would not appear. It took me a while to figure out that I had to disable and re-enable compositing for applications to be drawn on the screen. Or, switching between users wou…

Yeah, but I want to be able to click on stuff, too.

Yeah, but I want to be able to click on stuff, too.

Just pass it on to whatever you overlap…

Do yourself a favour and

Of course, if you’re using Wayland, then it won’t work… The eyes will only move when your cursor is inside the window, and there will be ugly rendering artefacts.

Of course, if you’re using Wayland, then it won’t work…

Then maybe we’ll come up with a Wayland solution!

You don’t know because you haven’t tried it!

It might be nice if there were a ‘5 eyes’ version of the app - feeding paranoia can be relaxing (“see - they really are watching”).

You can run multiple instances of xeyes.

This solution is limited to an even number of eyes, unfortunately (though I suspect you can work around that with some clever overlapping). 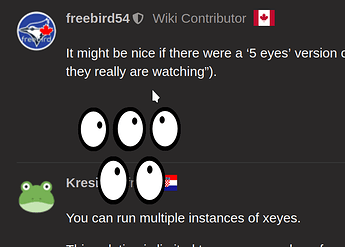 we need a 14 eyes version

Is it only for me that as “simple” a thing as adding/removing a virtual desktop in Plasma/Wayland just makes the whole DE freeze? I’m also getting Plasma crash notification each time I login into the session.

Do you have a minimal example that compiles? It’s a bit hacky, but if it works… Just a big transparent window that passes all events to everything behind it. That’s all I need, really.

My one is one in 3: eyes cat clock

No, that’s not good enough, unfortunately…