A question about workflow

Hello, everyone. I have a doubt, which is not a technical issue, mostly just a curiosity, so I believe this is the right place.

In the Linux community I hear a lot about “workflow”, and how tilling WM are the obvious productivity choice. While I can see their utility for some stuff I do, I couldn’t find any easy solution for quick file access. You see, I am a teacher and a student at the same time, so most of my work revolves around quick searching and opening pdf files, which are either books (shameless user of Library Genesis, don’t bully me), pre-prints and student assignments (or my own assignments) which I have to consult back and forth, so Krunner on KDE, or even Dolphin’s file indexing is something that just makes my life much easier than a constant browse among several folders just to get the file I want. However, seeing how file indexing is so frowned upon (I have a decently powerful computer, so I don’t mind the big baloo file and indexing doesn’t affect my performance much, besides, I can chose which folders to index on KDE), I wonder how people do quick search through files in a more “advanced” way, if something even exists.

So my doubt is, for other people who work with similar things, how is your “workflow”?

First of all, welcome to the community!

Next, I would point out that there is no “best” choice for productivity. We talk about workflow because we all have a different workflow. One of the things that makes Linux great is the fact that we can choose whatever method best suits our personal workflow.

You see, I am a teacher and a student at the same time, so most of my work revolves around quick searching and opening pdf files, which are either books (shameless user of Library Genesis, don’t bully me), pre-prints and student assignments (or my own assignments) which I have to consult back and forth, so Krunner on KDE, or even Dolphin’s file indexing is something that just makes my life much easier than a constant browse among several folders just to get the file I want. However, seeing how file indexing is so frowned upon

I am not sure why an index would be “frowned upon”. Especially if you are doing things like indexing rasterized PDFs which require OCR to read them.

That being said, there are ways to search normal documents fairly efficiently without an index. Although it will never be as fast on a large library as content that has been pre-indexed.

However, it isn’t clear to me what indexing or not indexing has to do with using a tiling WM. Those shouldn’t be mutually exclusive.

First of all, welcome to the community!

I am not sure why an index would be “frowned upon”.

Everywhere I look for file indexing I can only see people asking and advising to disable it, which I can see why. It has a hit on performance.

However, it isn’t clear to me what indexing or not indexing has to do with using a tiling WM. Those shouldn’t be mutually exclusive.

I know I can install for example, Dolphin (and probably Baloo will come as a dependency) wherever I want, but I don’t know if that would look good outside a KDE environment (I know, what a concern to have, haha) and honestly, Dolphin is what makes me stick with KDE regardless what other functionality other DE or WM might offer me. That’s why I am asking about other kinds of file indexing/file browsing different than what is offered by KDE.

Something like catfish is little more portable than baloo.

You mean more advanced than find . -iname "*somename*" ? Nah, that is just silly.

However, seeing how file indexing is so frowned upon

I do not uderstand this. Indexing seam pretty reasonable to me. Especially if you have files that do not move that often - therefore you do not need to reindex then too often.

If you have patience to do it you can use tool like calibre to manage your library (patience is for the part where you build the library not for searching in it). It can be a benefit to add some metadata to the files so you can filter them not only by their name.

I honestly don’t know why you would be looking for something else if KDE is functionally working well for you. KDE is very responsive, fluid and extremely stable and customizable. It’s solid and just works. Only my 2 cents.

For example, I use Endeavour with plasma as my daily driver, but was looking at Archcraft on a VM yesterday, and I really liked Openbox there (for the looks, admittedly). However working with it would be a little bit annoying until I found out some alternative. That’s why I wondered what I could about file indexing there.

It’s fun to learn, but yeah, KDE is where I’m settled for now.

In the Linux community I hear a lot about “workflow”, and how tilling WM are the obvious productivity choice.

Yes, many people like TWMs, because they allow you to have a mostly keyboard-centric workflow, minimising the need to switch to a mouse. This is especially nice on a laptop, where you don’t have a mouse and the trackpad or that nipple-thingy is just too cumbersome.

That said, KDE Plasma can be configured to be almost as keyboard-centric as any TWM, without any downsides to using TWMs (which tend to be feature-poor). It’s really a matter of preference.

However, seeing how file indexing is so frowned upon

Well, that in itself is not a valid argument not to use file indexing. It’s basically just “peer pressure”. If file indexing works for you, and you’re happy with it, that’s fine, you should use it.

As far as I can tell, there are two valid reasons to change your current workflow:

Peer pressure is not on that list, and it’s especially stupid since one’s workflow is something very individualistic. What works for you might be awful for me, and vice versa.

However, if there are so many people who “frown upon” file indexing, that might be a hint to explore why that it. However, I don’t think that “frowning upon” is a valid way to describe this, I think that most people are expressing their preferences as the superior way to do things (because, for them, that is the case, and they have good intentions), but they ultimately don’t care what you yourself use (and if someone is really passionate about your workflow, that person ought to get a life

Personally, I hate file indexing, because I think it is a waste of resources at moments when I might need them, and I can find files just as quickly without it. Also, I don’t like the idea of my files being indexed in some database, that just makes my tinfoil hat itch.

Again, that doesn’t necessarily mean that you would be just as happy doing things my way. I am a big proponent of using the terminal. For me, that is the ideal workflow, I’m a fast typist and it speeds things up tremendously when I don’t have to click on things. I like Dolphin solely because it has Konsole embedded in it, without it, I would find it useless.

For quickly finding PDF files I use two utilities: fd and pdfgrep

There’s recoll. It has a learning curve.

If you like plasma but want to use a tiling window manager instead of kwin you could try i3+plasma. I haven’t tried it but there are several different posts about it according to Google. i3 is probably one of the most popular; other window managers may have other effectiveness.
An example: 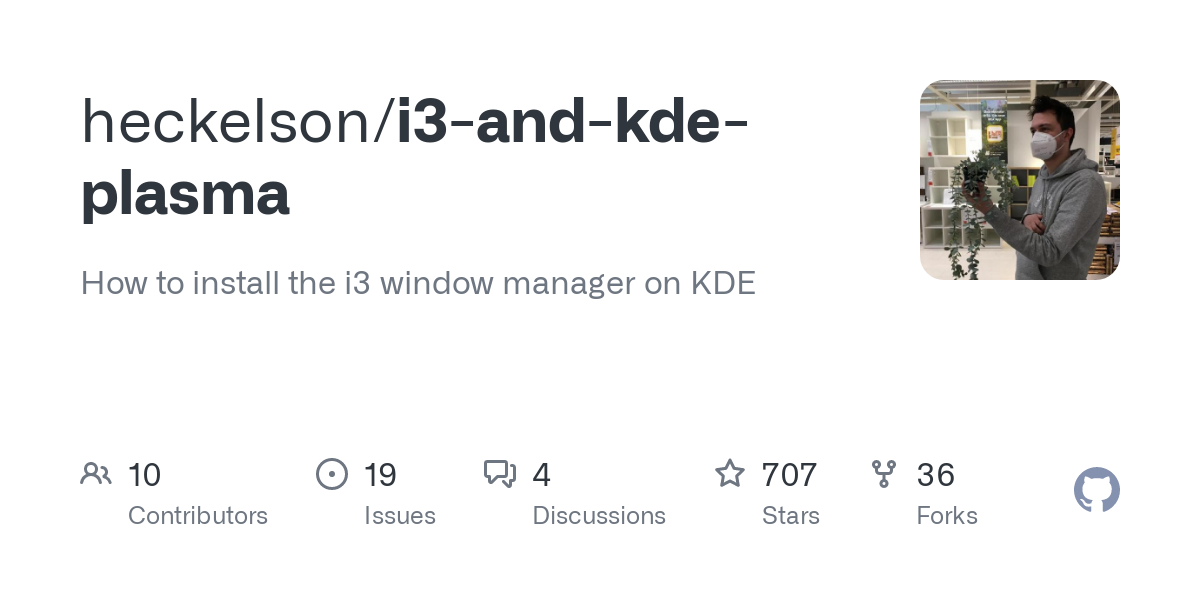 GitHub - heckelson/i3-and-kde-plasma: How to install the i3 window manager on...

How to install the i3 window manager on KDE. Contribute to heckelson/i3-and-kde-plasma development by creating an account on GitHub.

I use xfce plus i3 which works great. Perhaps that could also be interesting.

one’s workflow is something very individualistic

That reminds me, sometime ago, office heating broke so I wrote a quick program that computed millions of iterations of the Ackermann function, using 100% of the CPU of the corporate laptop, to keep my belly warm

Normally, I would have mined crypto, but that is strictly forbidden on the corporate PC.

The time has advanced. Now you have dedicated tools for that… like stress.

Yeah, I forgot to mention, it’s a windoze laptop, and at that time I did not know how to use it at all, apart from running a C compiler.

I don’t think windoze is quite ready for the average user.

Yeah, I know you can use stuff like Krohnkite on KDE, or even replace Kwin altogether, which could be useful for me specially for quick LaTeX type and preview. But my question was more like on the lines of “how people who do not use Dolphin or KRunner manage to efficiently access files?” so I could have some idea of the alternatives.

“how people who do not use Dolphin or KRunner manage to efficiently access files?”

Refer to my long post above. TL;DR: fd + pdfgrep work great for me, when it comes to finding PDF files.

I use LATEX all the time, I typically have Okular with the PDF on one monitor, and Kate with the code on the other, and I use Konsole embedded in Kate (F4) to compile and do basic file management. Okular automatically detects changes in the PDF file and reloads it. I also have texlab installed for LSP support in Kate. Very comfy.