A Festivus For The Rest Of Us!

There’s dozens of us across the world who embrace the joy of a commercial free holiday. Many dozens.

May your drinks be full, may your tinsel not be distracting and your pole lack decorations and luster.

Air your grievances loudly, and for an unwanted miracle or two!

This is the day that scratches my itch, are there any other Festivus (Seinfeld) fans out there??

The origins - as told be the prophet Costanza to Kramer:

"Frank: Many Christmases ago, I went to buy a doll for my son. I reached for the last one they had, but so did another man. As I rained blows upon him, I realized there had to be another way.

Kramer: What happened to the doll?

Frank: It was destroyed. But out of that, a new holiday was born. A Festivus for the rest of us.

Kramer: That must have been some kind of doll.

Cheers to that destroyed doll.

are there any other Festivus (Seinfeld) fans out there??

are there any other Festivus (Seinfeld) fans out there??

It’s the only holiday I celebrate. 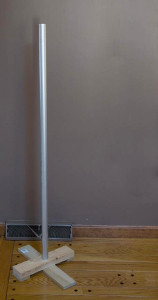 A bit of trivia: The Seinfeld writer who introduced the world to Festivus based it on a holiday his father had “created” in 1966:

Festivus was conceived by author and editor Daniel O’Keefe, the father of TV writer Dan O’Keefe, and was celebrated by his family as early as 1966. While the Latin word festivus means “excellent, jovial, lively”, and derives from festus, meaning “joyous; holiday, feast day”, Festivus in this sense was coined by the elder O’Keefe. According to him, the name “just popped into my head”. In the original O’Keefe tradition, the holiday would take place to celebrate the anniversary of Daniel O’Keefe’s first date with his future wife, Deborah. The phrase “a Festivus for the rest of us” originally referred to those remaining after the death of the elder O’Keefe’s mother, Jeanette, in 1976; i.e., the “rest of us” are the living, as opposed to the dead.

So…which grievances are we going to air? 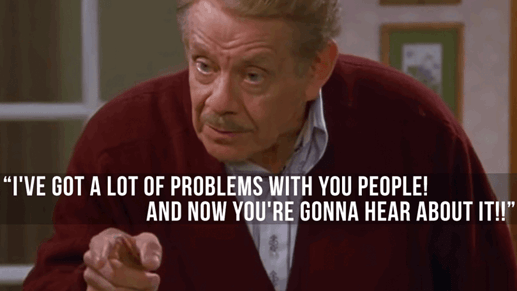