I have a Dell Precision m6700 with an Nvidia Quadro K4000M and have been running EOS with the nvidia-390xx graphics driver.

Today, I had reason to install Ubuntu on an identical system and was offered a choice between Nouveau (default), nvidia-390, and nvidia-418. A check of Nvidia’s web site confirms that the latest driver for the hardware is, in fact, 418.

Given that, I thought I might upgrade my EOS system to nvidia-418xx. The problem is, there don’t seem to be any 418 packages. A quick Google seems to indicate that there are (or, at least, were) such packages but they don’t show up for me.

Anybody know what the deal is with Arch and nvidia-418xx?

Anybody know what the deal is with Arch and nvidia-418xx?

The drivers are unmaintained, EOL, and no longer available. Use 390xx instead.

Hello! I just stumbled on this thread and want to let you and any future stumblers know, that I have same generation Precision m4800 and I have successfully installed and used the 470.xx drivers.

I don’t really know why I even tried this as I too checked Nvidia’s website and confirmed that the latest driver is 418.

I don’t know / doubt there is any raw performance benefit, but I have my steam library full of games that I wasn’t able to play before because they would crash on boot with the old driver, but now they boot up nicely.

Of course try at your own risk and make sure you know how to revert the changes if it doesn’t work. 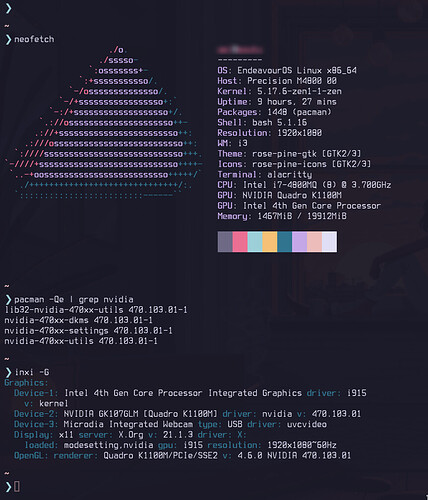