What is your take on Manjaro launching there own hardware?

I think these are a great way to increase the influence of a distro overall and get a nice relationship with the hardware manufactures for future. They also ship with pinephone. 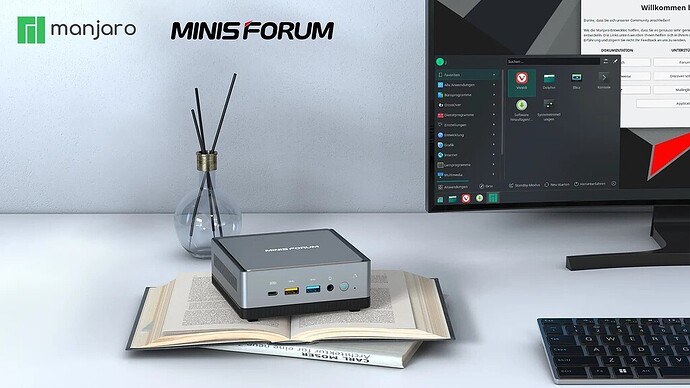 They have been doing this for years with different vendors. Many other distros do it as well.

It is a pretty reasonable way to make some money for the distro.

I wish them success, laptops shipping with Linux aren’t a bad thing.

If it is a decent machine people can just buy it and immediately re-install with EOS.

@jonathon please stop with the FUD already. how is that possible because they take software directly from the arch repos into theres:

how is that possible because they take software directly from the arch repos into theres:

I have no comment on the quote itself. However, the software in the Manjaro repos is a combination of software they package themselves and software from the Arch repos.

It is not all from the Arch repos.

I feel any distro getting together with a hardware vendor to spread the gospel of Linux is great for the Linux community and us in general. Because more people get exposed more would try to find out and start using a Linux distro. I don’t care which distro it is as long as it’s Linux.

I agree completely with @s4ndm4n, it is easier to customize a pre-installed Linux system than Windows. Also it is easier for people to dual boot with Linux too.
Awareness is the most important thing. There are so many things wrong with Windows 11 that people are not upgrading from Windows 10 and are instead searching for alternatives. And not everyone can afford a Mac or like the Apple ecosystem. Hardware manufacturers shipping Linux shows them that Linux is a viable alternative

Windows 11 is Vista in a new skin. I think Windows has to support 10 beyond 2025 because a lot of big companies are not switching (unless they’re forced to). Anyway not gonna continue with Windows stuff it’ll be OT.

Is W11 that bad? I haven’t tried it. My favourite is still XP and Win7.

More power to them.

If they are able to launch fully supported Linux hardware into the market, it will potentially benefit other Linux distributions too. If people are happy with a preinstalled Manjaro, good for them. If people are able to switch because everything is OSS and even upstreamed … great.

Hardware support isn’t a zero sum game for Linux, everything adds to the ecosystem.

Compared to 10 and the 2 you mentioned 11 is bad. A simple example we no longer can open files by dragging and dropping the files onto a program minimized in the taskbar. And there’s a lot of other stuff that matters that has been screwed up.

Windows 11 is a must-have if one is using the newest Intel CPUs with the new 2 type core architecture. Because the economy cores don’t activate when used with Windows 10 only the bigger ones(forgot the tech name for them) work. Microsoft can patch it in Windows 10 but I don’t think they are not going to patch it to push Windows 11.

Just the upgrading causes some people I know to be unable to use their computers for a few days.
Several things that worked in Windows 10 aren’t even working. And the theming is inconsistent.

There are many Arch packages they prefer to package themselves.

They used to package development git versions of systemd and grub, instead of just using the stable Arch packaged versions, which ended in bricked systems for many.

with known issues just to ship new features as first (without even mentioning that they ship experimental code or where it comes from),

LOL, this is so true.

They pinch and pilfer from other open source projects, package them without properly understanding them, and take credit for the “new feature” without mentioning who developed it or where they stole it from.

Driving the original devs of these “new features” nuts.

At least it’s decent Ryzen hardware and price is respectable.

It’s pretty cool. However, I plan on purchasing system 76 hardware for work. It’s kind of local for us, and will see how it goes.

I think that’s a good way to go. What are you getting? I wish i could afford one of their Thelio desktops. Ryzen of course.

Several options, pangolin and thelio (Ryzen 9 5950x, 16 cores) among others. Most users are new and likely start with pop OS. For Thelio not yet sure how to deal with sys admin, since it will be used by several users but like them to have some freedom to install libraries for some local programs.

I have to say, Manjaro deal or not, that company does offer nice priced hardware and most of them start with 16 GB RAM.