Since I am about to reinstall the system, I am toying with, again, try Plasma. I usually do this about 2 - 3 times a year and then bounce off of it but hey, the KDE team say so much is improved (again).

@Beardedgeek72
Like you i have also installed it for the N’th time just recently. I have switched the log in screen back to breeze as i don’t really like the default one. I’m used to Cinnamon so KDE is just a bit weird for me but I’m getting used to it. I don’t understand all the different things you can do with it. The online install of KDE Plasma on Endeavour is one of the best i have used. It just works. Haven’t had any issues installing it. I have tried lots of other KDE versions. I have also read about the upcoming version 5.18 which has some new features. It may be a keeper.

I am curious if having a new computer will help my experience; before I switched I really didn’t like Cinnamon either, but it works great now.
Anyway, I wanted to try a live environment first so I actually have a boot stick with Krypton on it (Suse’s version of KDE neon).

I have also tried Open Suse Tumbleweed KDE rolling release version and it’s great but Open Suse is just so much different than Arch. Very good, very stable but way different. I’ve always gone back to Cinnamon and i was on it on Antergos and had little troubles. For me it’s just very reliable but my problem is i like them all.

My problem with Suse is that it is absolutely rock solid until you want to change something. Out of the box Tumbleweed is more solid than Ubuntu. Leap is at LEAST as stable as Debian.
Then you remove or add a driver or something and suddenly we are back into the dependency hell of RPM packages from 15 years ago.

Anyway couldn’t get Krypton to boot. SO KDE Neon live stick it is.

My problem with Plasma is threefold, I think.

plasma is very good, but a little too charged for my taste

I agree with you … it sounds familiar. I do like Xfce a lot now since getting familiar with it. Still like Cinnamon a lot and also like Mate a lot. Gnome i can tolerate but have never really gravitated to it because it reminds me of Ubuntu. When ever i hear things or see things about Linux it’s the first thing people say or think. Drives me crazy when people think Linux is Ubuntu! Or that’s the example they use when someone has an issue instead of asking what they are using. Since i found Arch and the reason I’m here because of the former Antergos. I will never look back. I just like the eco system and the way it works so EndeavourOS is it!

Hard no from me, again. I lasted 1.5 hours on the live environment before leaving. I still think it looks very dated (and dated in a different way than the slightly charming way LXDE / LXqt and Xfce feels dated. Plasma feels like someone looked at a 1988 dual tape boombox and said “Yes. That is modern”. But the biggest turnoff is the lag and lack of responsiveness.
I am sure there is a setting somewhere to not have the start menu take 1 second to animate itself up to a position where it’s use able. But I didn’t find it. It’s odd tho; some things, like clicking on folders and stuff is extremely responsive. Other things are just… lagging. And I am sure not all is because someone thought it was good design to deliberately animate stuff slowly.

So, back to the drawing board. I think I’ll do Xfce again. Or Cinnamon. Dammit.

I think Xfce and Mate are probably easiest on resources.

Thing is it’s getting tight at the bottom. It’s actually easier to count the DEs that takes a lot: Cinnamon, Gnome and… yeah. That’s it actually.
Budgie is <700Mb these days.
Xfce and Plasma < 450Mb
Mate is hard to tell depending on what option chosen for compositor, but about the same, usually.
LXDE / LXqt <350Mb

And then we have the Openboxes and I3s and…

i dont know how you brand memory of desktops properly…

gnome is a hog… but also depend how big your ram is, how bigger how much it takes… kde you can disable some background applications that will take down some resources.

now i have kwin again on my lxqt… and budgie improves probably a lot of gnuomes background loadings probably but its stil based upon gnome-session while cinnamon is a complete fork…more on a older gnome code. memory use is also kinda preceptive i think

it’s a steeple war to know which office environment is the most greedy in ram; but close your eyes when you play games that are even more greedy

Oh I know, I have 16 Gig now and I really don’t care that Cinnamon takes 3 gigs after 10 minutes of use. It’s just buffering, and I know that. The difference is when it affects usage. Gnome animations that stuttered (before 3.32) on machines that could show all of Plasma’s effects without a hitch.

Good luck with your journey. I really like Plasma and would be running it on my desktop if I didn’t have some minor issues with video playback. Considering it’s mainly used for entertainment, that’s really a rather big issue. I find the powersaving features more configurable in Plasma, so it works well for my business laptop .

I’d held back on Endeavour thinking here we go again (remember Condres OS?) but then the origins of this were better and the project really did seem to be progressing so I went ahead with an online KDE install after the latest release and to be honest was blown away. It’s fast, stable and everything works. Tiny glitch is the event calendar widget needs resizing with every boot but this is nothing compared to what is currently happening with the likes of Manjaro and other Arch based distros. Now to try Gnome as well. Many thanks to the devs, please don’t let it break with updates.

The online install of KDE Plasma on Endeavour is one of the best i have used.

Hi ricklinux, do you mind explaining how you mean the online install of KDE, please ?

@PrimeSuspect Welcome on the forum and for sharing your experience with us.

@Daemonicvs Welcome to you as well, Plasma is one of the default choices in our net-installer: 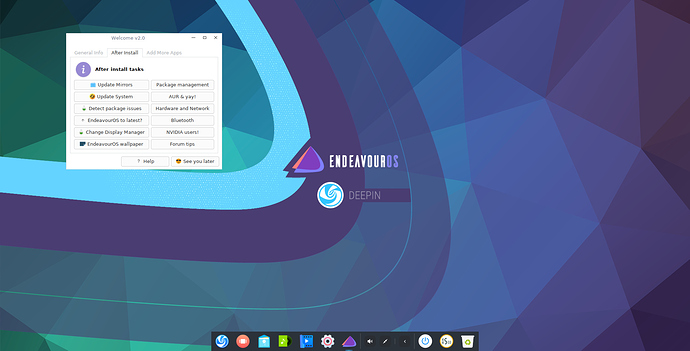 There are a few things to it that are not in our control:

The first is the trickier one. Fortunately they have very good information about potential update issues at their web pages, so keeping on eye on that helps resolving Arch issues.

The second one is where you can help yourself more than people often realize. It is always a great idea to check EndeavourOS forum before updating your system. That applies to the Arch site news as well.

The third, AUR, is software provided by users of Arch based systems. It means that AUR software is not officially supported, and may cause trouble, depending on the particular provider.

Anyway, contacting this helpful forum should provide the assistance that is needed to successfully use EndeavourOS.

Thanks for the advisory.

I’ve always been in the habit of checking where possible first before updating but with some distros this doesn’t seem to count for much maybe because the traffic is too low for rants to appear in a timely fashion.