I just published an article on: 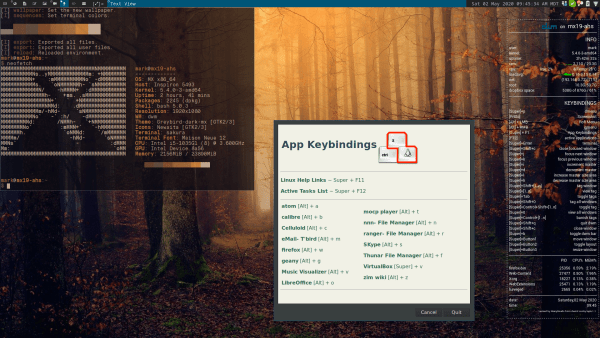 [soapbox] Personally, I think that thing thing that prevents many people from using tilers has more to do with “fear of the unknown” than anything else. I can say, It took me more than …

Tried tilers. They’re just too much work to get anything done. I use terminal all the time, but I also use the mouse. Why go through all that typing, when a mouse click is within reach.

I’m very used to i3. using it since the past few months now. Plus I find it very easy to preserve my configs when I switch distros

Edit:
Read your article. I also had the same fears, and later realized they were the major benefits actually. I’ll have to share it with my friends who don’t understand tiling wm.

I have recently started using AwesomeWM, I found it quite accessible, and since it can combine both tiling and floating modes it is quite easy to experiment with different setups until you find what works well for you. I would definitely recommend giving it a try if you’re not sure if you will like a tiler or not.

i found awesomewm to an extremely customizable wm. The awesome widgets are a cool thing. They make your desktop look any way you like.
Though I’m not personally ready for lua.

I like using tilers that comply (mostly comply) with EHWM and use (can use) sxhkd. These two ‘features’ allow me to create keybindings that work similarly on all my tilers (memory assist) and achieve a coherent/ cohesive set of task/ workspace conventions, labels, etc.

FWIW The debian based iso I’m building, will demonstrate those features. I would build it on an arch base, if I could ever figure out how-to create a snapshot. (MXLinux allows dummies like me to build respins with the click of a button). btw. the dotfiles on the iso will be largely portable to any distro.

I don’t know how tough it is to create snapshots, but I do know that Arcolinux has a whole version dedicated to custom ISO building on Arch systems. Might have something there for you, maybe a tool like MX has? It can’t be too bad, or there wouldn’t be so many ‘user builds’ available…

I never looked at that version of arcolinux. Sadly, I have not been impressed with their forums and support when I did try to use their distro. Erik’s work is great but it is too video oriented for me to use.

It has to be the strangest distro out there, and perhaps that applies to Erik too, but there is some impressive work done there that can be ‘appreciated’ elsewhere…
I know what you mean about the help files - but the scripts and mods and intentions are all good. I am (slowly) in the process of thinning out the cruft, and keeping one alive as a reference only.

For me the videos are a learning style thing. I learn better by reading, I have a hard time going from a visually observed stream of consciousness explanation to getting something in my ‘too small’ brain. Erik and team do wonderful work. It’s just not a great fit for me. I like detailed, written, geeky explanations that I can take from written word to keyboard and then watch my machine crash.

I have a similar effect - but for me it is more a time/attention thing. Thing is, I read very quickly - and the videos don’t run in fast forward! And, if they did, would probably miss much more. It is actually surprising how much is NOT on video if you look around though - but you still have to dodge lots of embedded pix.

I agree that what stops most people from trying a (tiling) wm is just a psychological barrier more than anything else. For many it’s hard to imagine that their desktop may look and feel very differently and there may be more efficient ways to use it. I remember how I hesitated before trying i3wm for the first time. It took me half of the official user guide and a video presentation from the lead dev (unfortunately not for me personally, but one I’ve found on youtube

) to convince me that I am going to love it

Humans are creatures of habits

Tried openbox when I was on manjaro, enjoyed it very much, would love to see an Endeavouros version. Endeavouros is simply the best for me. at last a distro that is just what I need. I use xfce version, but it would be cool to try openbox again, i can wait until Endeavouros do the magic with openbox.

It’s trivial to setup… the instructions are in the OP.

I too like Openbox and liked the Manjaro community edition. Manjaro not so much; too many modification and separate repos. But I’m thankful for Manjaro introducing me to Arch and I would not hesitate recommending it to a new user. Currently I’m using LXQt with Openbox WM on a notebook. Truth be told I could just as easily replace KDE/Plasma on my desktop with Openbox or LXQt. I’m only using a fraction of the possibilities. I even removed Latte Dock from my desktop recently, not because it was a bad app, but because Plasma doesn’t really need it and it kept getting in the way. Why do I stick with KDE/Plasma? Because I know how to set it up and fix problems and it just works.