This kind of weather

This is our weather…

It seems that you can look forward to a 21C (!) rise in temp next week.

I wouldn’t be surprised if that’s what happens

We’re already there this week 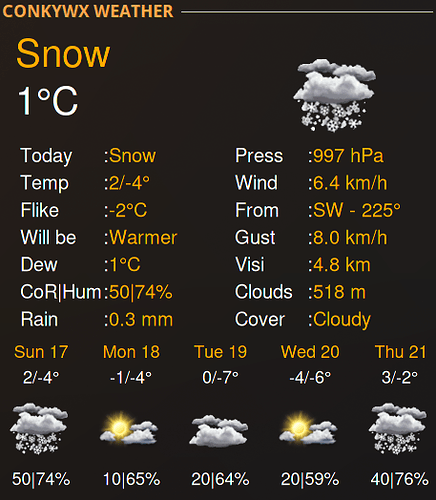 Lucky us - but we still have to shovel it!

Lucky us - but we still have to shovel it!

By the way, I always thought that Canada is colder than ours

But my friend from the suburbs of Toronto constantly sends photos that show that it is not very cold, but a lot of snow

Toronto is an exception - it doesn’t even get that much snow compared to, say, Ottawa or Montreal (as far as cities go). For temperatures, you need to head westward (or North). Cold River, Ontario has recorded some doozies - Timmins Ontario is usually -30C to -40C - Alberta sees a lot of -40C. Of course the northern places (in Nunavut or Yukon mainly) average lower than those. I think it was Snag in the Yukon that managed -63C. I thank the big Lake (s) surrounding Toronto for making it easier here! Damp sometimes, but warmer!

I think it was Snag in the Yukon that managed -63C.

How about Russia, Oymyakon ?

That’s the place to be, that’s the spirit!

Oymyakon and Verkhoyansk are the only two permanently inhabited places in the world that have recorded temperatures below −60.0 °C (−76 °F) for every day in January.

Love all those tricks with boiling water freezing outside right in the air, hammering nails with a banana…Lovely

Geeeeebus. . . No wonder you play with Linux. I couldn’t survive in that. Almost 30*C here in Los Angeles yesterday.

Guess I shouldn’t say that I’ve got highs in the 20’s, and lows that are still around 5-6?

From -20 Celsius to 3 Celsius in one day?!? That is the motherload of opposites!!

Yes, Bryan, in the last few years there really are such temperature changes.

Its just a few degrees below zero here and snowing all day long. Deep winter outside the window

According to those pictograms it goes from -18°C mostly sunny weather to +3°C heavy raining.
Of course the temperature has to jump that much otherwise it wouldn’t be raining.

Here in the desert southwest, we still haven’t had a hard freeze. Some years it happens by Thanksgiving, but usually no later than between Christmas and New Years. The last freeze is usually in February - maybe there won’t be one this year. Edit: spoke too soon…

From -20 Celsius to 3 Celsius in one day

Actually, that;s fairly tame! I started out my drive home (Calgary Alberta) from northern Montana, near Helena. Temperate was -58. By the time I unpacked the 18-wheeler in Calgary that afternoon it was +10C in Calgary (A chinook blew in). That takes some getting used to!

Just for information, a chinook is a ‘rain shadow’ wind, descending from the mountains moisture free, and warming as it goes. Similar to a katabatic wind, but consistently warmer, and dry. January temps in Calgary often vary between -40C range to +15 or so…

(if you don't like the weather. wait a few minutes)

Make sure it’s really cold enough for this! Scalding is not fun…