@ricklinux Here it is - inxi
My current setup is a 1gb ext4 partition for /boot and rest /root. I am guessing a UEFI boot would need another partition?

So for example if you install KDE and GNOME for same user, it will be barely usable and would require a lot of time to actually fix it.

KDE and Gnome share very little actually (one being QT and the other one GTK based). XFCE and Gnome or Cinnamon on the other hand, by sharing GTK configs will be influencing each other. The system won’t be broken either way, it’s just that some settings in one of them will interfere with settings in the other. If your goal is to make them all look and behave the same, you might not even see anything amiss. Truth be told I had multiple DE’s installed for a long time and my system didn’t crash or break. Just some quirky settings here ind there, but minor things. On the other hand I was only using one of those DEs I just had the other ones as backup.
TL;DR: having multiple DEs installed is not really such a big deal, it’s still recommended to test additional DEs on another install than the daily driver or having another user for each of them for improved stability.

If you have used Budgie with satisfaction so far, you can also install it at EOS. Otherwise, if you want to compromise between your needs and the services provided by a particular desktop, and stability is important, Xfce is the best choice.

From personal experience having KDE and Gnome as same user is not very pleasant experience. Even if it just only one config file, it is something that needs to be done repeatedly. What i mean when i said breaks is in terms of usability. Having to change every time keybindings for example or any other configuration, every time DE is changed, is not something that someone wants to do. Even if it is just 5 seconds, it’s adds up and starts to get annoying. There is always possibility in future, that updates will affect something else as well. Having services from another DE to run on current one etc. It’s all just a possibility and is not 100% guaranteed to happen.
While it is possible and probably will work without any problems if DEs are configured in same way or not configured at all, personally, I think that it is much easier to create a new user than to think and tinker about config files etc.

Thanks y’all for our help. I created new users for every desktop using gui in each one. Xfce didn’t have a gui so I used command line. Then I created a common folder in home and a user group and gave it shared access to that folder. Followed that by creating downloads, documents folder etc in that common folder. I deleted these folders in all DEs and created symlinks from the common folder. Now I have multiple users, each using different DE with the same downloads, pictures folders. Just need to get Dropbox sync to work the same way and my setup would be done.
I was seeing some of the common theming issues Nate has brought up. I was seeing KDE start menu icon in Bugdie. Thighs it was funny 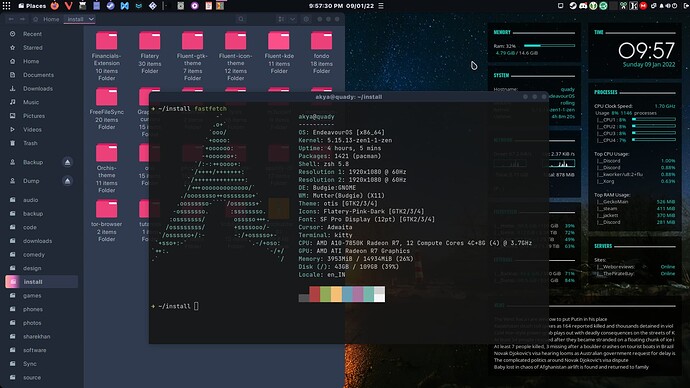 It took me a while but finally switched to Endeavour OS today. Switched to GPT and UEFI, used borg to restore important folders and configs, used a cpl of scripts to install packages. This was pretty smooth. Still testing but everything appears to be working. The mirrors borked on me and had to cancel the installation and try it again, but apart from that I am very happy