I tried bibisco myself and it worked just fine. However, the Community edition has many limits here and there as you can see on its comparison sheet (halfway down the home page). If your project becomes huge, and you aren’t willing to purchase the Supporter’s edition, then you will run into many problems eventually.

My suggestion is to plan ahead and use software that won’t make you regret learning how to use it when you find out you need to switch to another.

So, I suggest three options here:

This one has pretty much everything that may attract someone to bibisco and more. However, it does come at a cost in terms of dependencies for full functionality where you have to download over 50 additional packages (mostly haskell for pandoc). Luckily, the packages are very small.

This is a Markdown editor with many great features that can be used for novel/story writing. The only drawback is there is none unless you just don’t like Markdown. Well, technically, it does have a higher learning curve, but it comes with a built-in startup tutorial and example template that lessens the stress of having to learn how to use it.

This one is absolutely perfect for most writers! However, it sometimes just fails to build on Arch. So, I’m currently using the Windoze version with WINE. It doesn’t look as uniform as a native linux app, but it works just fine and has never crashed on me.

And on Windows, I much prefer SmartEdit Writer which is an app in Beta but it is like using a Word app that has added story writing features, so it felt very natural to use. However, I couldn’t get it to work with WINE so now I’m re-learning Zettlr while heavily considering Manuskript. These two are both available on Windows, so they are great for my needs.

The only reason I am seeking to stop using Quoll Writer is because there is no official linux support and I am having to use WINE - literally the only reason I have WINE on my system.

This is my opinion after my experiences with using them all. I’ve also tried others, like just using LibreOffice for years before switching to a dedicated app, and using Google Docs, Milanote, OneNote, etc.)

Anyway, hope this helps someone.

EDIT: I’ve decided to stick to using Quoll Writer because it really does have everything most writers would need.

I almost switched to Manuskript, but it surprisingly crashes a lot and your personal notes/to-dos cannot be exported, which means if you don’t have Manuskript, you won’t have access to those notes.

This one seems to have everything Quoll Writer has with the added benefit of a pleasing UI, recent-ish updates, and full cross-platform compatibility.

I’ll make an update here on whether or not I decide to switch to it. For now, I’m just testing it out with some imported scenes and files.

After a bit of testing, Kit Scenarist is actually a lesser option in terms of features. To be honest, the only real benefits were that it looks better than Quoll Writer and that it’s a native Linux app.

That being said, it actually doesn’t work properly with Cinnamon DE when it comes to importing or opening files from the filesystem - meaning sometimes you won’t even get to see the “File Open/Import” dialogs. It pops up and you think the app is frozen because you can’t see it and the only thing you can do is press “Esc” to go back to the app. WEIRD

This might be only my experience, so try it yourself. Anyway, I’ve uninstalled it.

I did go on a “journey” in the last two days however to try to find something native to Linux, and I almost switch to both Joplin and Obsidian because they also have Android apps. In the end, however, the superior export feature that Quoll Writer has ruled the day yet again.

Lastly, I did find a native Linux app that I will use as a backup to Quoll Writer in the event of compatibility issues - novelWriter. It can also export all or your notes, but it only exports a single file at a time. Also, it uses Markdown by default, and while you can’t right-click selected text and use “New > Character” or “New > Location”, and so on, like in Quoll, it has great features and seems to be stable.

You can find it here: https://novelwriter.io/

I do all my writing in Kate. It’s just a really nice text editor. Whether I’m writing text or programming, it is always my #1 tool of choice.

When it comes to writing, I prefer to do all the formatting in LATEX, simply because then I can very easily can make a beautiful PDF without thinking about layout. I used to use Markdown for the most basic things, like short notes and reminders, but almost always I ended up using LATEX anyway, so nowadays I no longer bother with Markdown.

I set up Kate to have a very minimal UI, by turning off all the menus and toolbars, so I can focus on what I am writing about and not waste screen real estate: 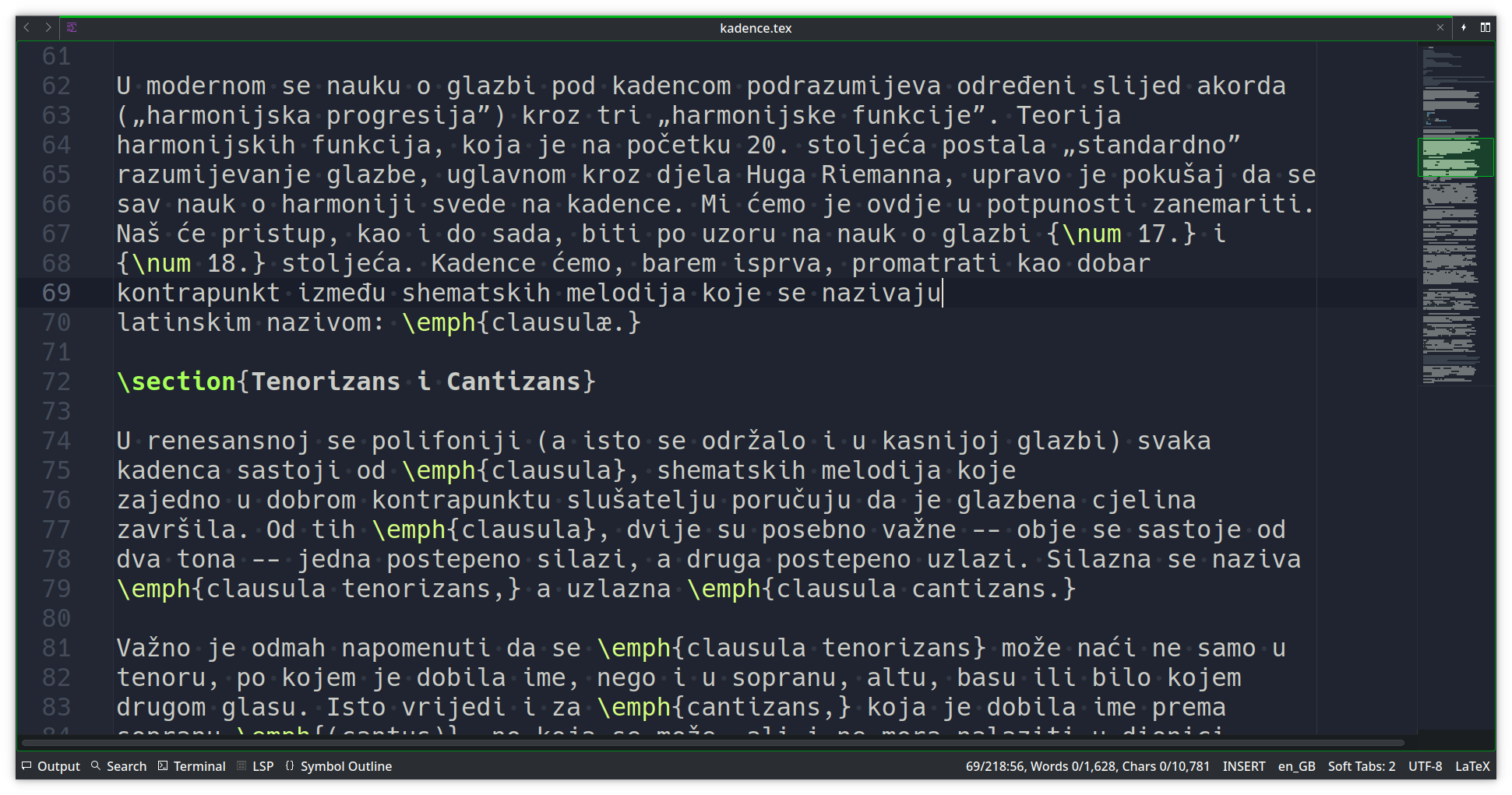 I also have Kate set up to run a LATEX LSP server, so it automatically checks the syntax as I type (because LATEX tends to be quite fussy when you make a mistake).

I prefer to just organize and write my files in text editor (Sublime Text or Kate), primarily using markdown syntax.

P.S. When i need to fancy them up with some category / tagging / search - i use simple template for Hugo to generate local server.

I have used FocusWriter and liked it a lot for my small needs.
Actually, I think that you need to know how far/wide are your needs for authoring. Maybe a simpler choice could give you what you need.
For structural organization, even LibreOffice/Writer or equivalent have enough capabilities, if you know how to use them.

As I am a dedicated Joplin user, if I would ever need to write again, I would use it, since it has a lot of helpful functionality. Many people at Joplin forum have stated they use it for such a reason.

Yes, I used LibreOffice for the majority of what I’ve written so far and just organised the files properly.

I also tried Joplin when trying to replace OneNote. Ended up using Milanote instead.

I hear that Sublime is really good, but given that it is 𝖆𝖇𝖘𝖔𝖑𝖚𝖙𝖊𝖑𝖞 𝖕𝖗𝖔𝖕𝖗𝖎𝖊𝖙𝖆𝖗𝖞, it just won’t do…

Yeah i have that habit since very long for various reasons, main one of which it can open truly HUGE files (2 Gb+) without crashing into pieces like any other text editor.

It’s truly a shame that it’s not FOSS.

Too restrictive price-wise. The free version is:

while Joplin lets you totally free to use your own cloud solution.

True, but they are also very understanding.

When I was trying to purchase the subscription, they had limited options in doing so. So, I told them I would just head back to OneNote and they gave me an additional 500 notes so that I’d stay. Pretty neat.

Also, if you’re just writing text and you’re in no need of images and all the other stuff they offer, 100 notes is more than enough for a 30+ chapter novel. Remember there are no text/word limits.

In fact, you could literally write your whole book using just one note - pun not intended.
It’s not practical, but it’s still doable.

PS: I am not anti-propriety software. I am anti-restrictive software - which is why I was gonna go back to OneNote. Though Milanote is still restrictive (even with my extra 500 notes that I am thankful for), it would be all I use for my writing if their offline editing was sorted out.

??? Does this mean proprietary is not restrictive? I thought it was by design… not giving info of what the code is doing behind the scenes, seems like a major restriction, at least to my understanding and preference.

Paying for a program is not restrictive, since the developers need to pay the rent.
But it’s going off-topic… Sorry…

Thus, it is a contradiction to say that you are not against 𝖕𝖗𝖔𝖕𝖗𝖎𝖊𝖙𝖆𝖗𝖞 software, but you are against restrictions.

I knew someone was going to mention licenses and such, but I was just waiting for y’all.

Obviously, at least to me, I was talking about the end-user features that makes someone want to use the software. Licenses that restrict re-distribution, re-selling, etc. are of no concern to me.

The only licenses I truly care about are those that restrict parts of the software when I click on something and it says “Need X license to use this feature”. While I do use one such software (Clip Studio Paint), the parts that are restrictive are those which I didn’t plan on using anyway.

Pretty much everything else I use is free/open source without end-user restrictions. Only exceptions are the software that I have bought outright.

I also use sublime and try alternatives but keep coming back. I came to it because of column cut and paste as well as the ctrl-D select with multiple cursors and it opens huge files easily. I have tried atom which seems inspired by sublime (I think sublime was first) but I find it slow. I also wish it went open source.

I have tried atom which seems inspired by sublime (I think sublime was first) but I find it slow.

i have that habit since very long for various reasons, main one of which it can open truly HUGE files (2 Gb+) without crashing into pieces like any other text editor.

vim can handle any large file less than 5GB without crash, but you should disable some heavy features.

Faster log explorer # klogg is an open source multi-platform GUI application to search through all kinds of text log files using regular expressions. It has started as fork of glogg project created by Nicolas Bonnefon, and has evolved into a... 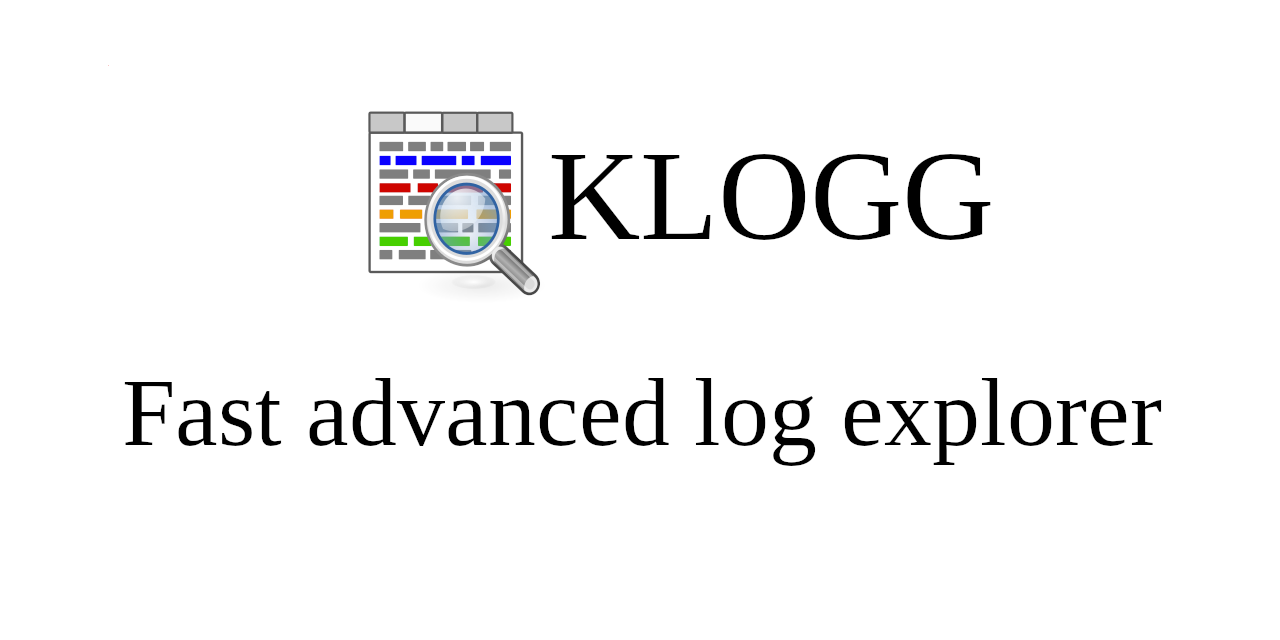 Really fast log explorer based on glogg project. Contribute to variar/klogg development by creating an account on GitHub.

I feel like my mention of Zettlr has brought in too many people mentioning apps that were definitely not made for story writing. This guy mentioned a logger… really?

Everything else is pretty much inefficient as a story writing app.